The recent event for ANZAC day is as good an excuse as any to talk about those other people. You know, non-USA types. They really do exist, I’ve seen them. Honest. 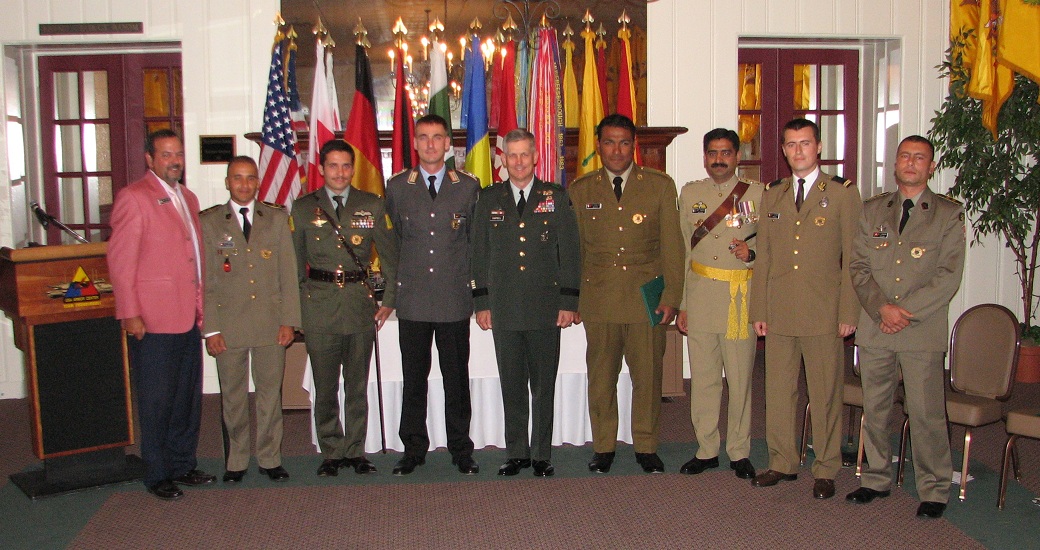 If you're curious, starting from the left and  skipping the guy in pink, Tunisia, Jordan, Germany, US, Bahrain, Pakistan, Romania, Tunisia.

Although my experience with foreign military personnel isn’t confined solely to my time in the US Army, one thing I will say is that it has given me a great opportunity to interact with foreign personnel: Either those who are assigned to an American base for training, or as Uncle Sam sends me around the world.

Now granted, the nature of my contacts has probably been that I have usually encountered the more professional end of the spectrum and so it may well be skewing my sample base, but by and large, it’s a case of form following function. There’s not much to differentiate a professional soldier from the US to Australia to Jordan in terms of their character. Fairly patriotic, strong-willed, looking for a challenge, and fundamentally honest and good-natured. Even the systems behind the various organisations seem to be fairly similar as, after all, a modern military is supposed to do the same job around the world. Yes, some countries have more expensive toys than other countries, but the paperwork when you break one is likely pretty much the same. 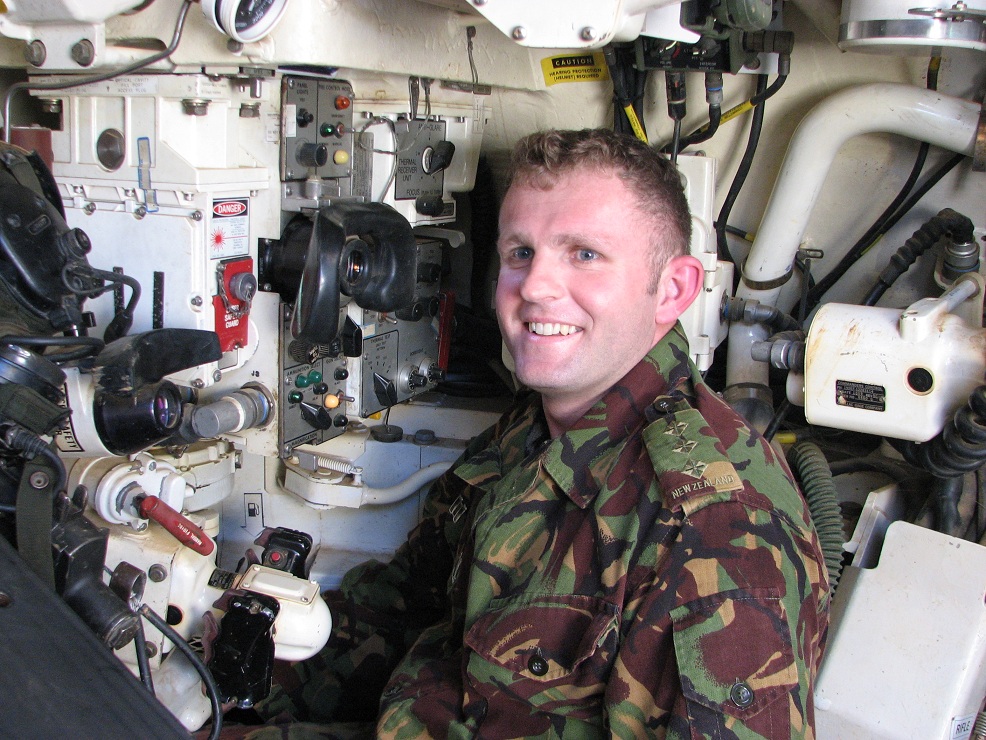 That said, it’s not as if there aren’t a few… quirks in the way they do things.

Many moons ago, I was off for a couple of weeks in Bovington on an exchange. We had had an officer come over and play with us for a while, his procedure with the radio telephone was cause for some amusement. “Hello three, this is one…” vice “Red three, red one…. Red three, red one”. Or “out to you” vs “break.” Certainly polite, and I guess it works, but it is a bit odd to my thinking. So, it was my turn to go over the other direction and Americanise the locals. 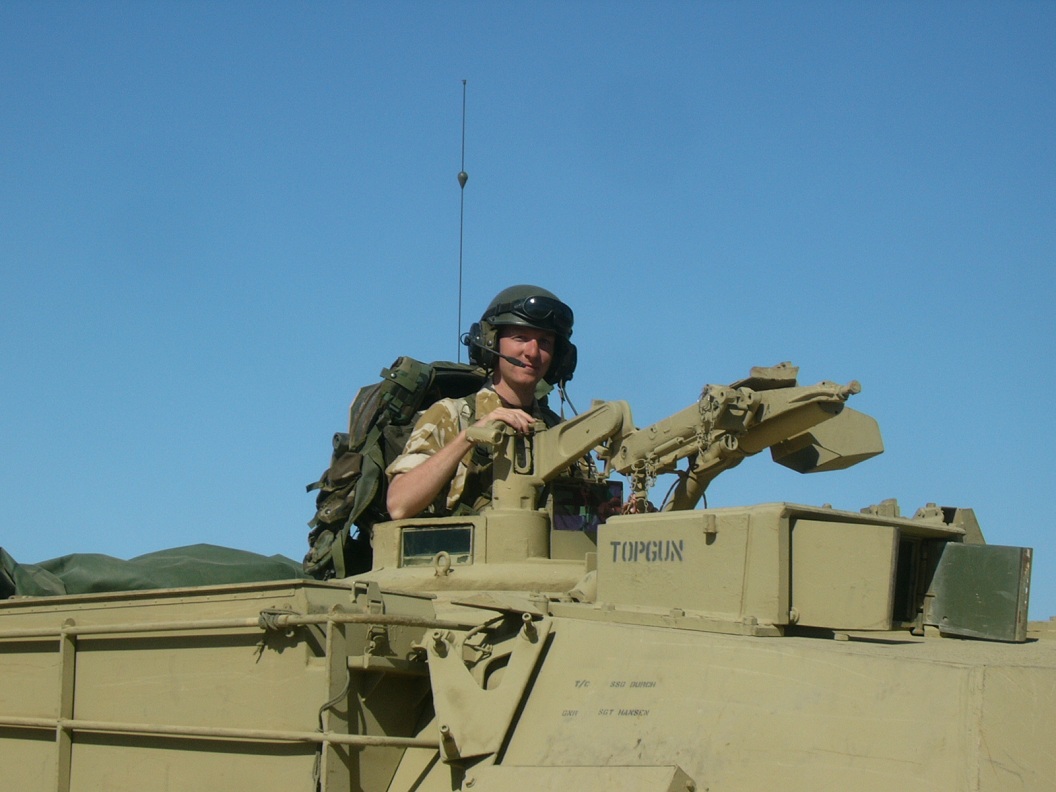 So as I’m packing to go I’m thinking to myself “what shall I bring?” Well, some of it was obvious. Field gear: BDUs, helmet, webbing, I figured I could borrow a sleeping bag over there. Class As in case of something more formal, and there was rumour of a regimental dining in at about that time, so the dress blues and sabre came along as well. Add some ‘business casual’ clothing (slacks, polo shirts etc) for the evenings or hitting the local night life (hey, I’m an optimist), and I figure I’m prepared. Foolish me. I forgot I was going to the UK.

I’m checked into the officer’s mess at Bovington, and as I sign in, I am presented with a booklet entitled “Rules of the Mess” (For those unaware of the distinction, the Mess in the UK is far more than an O-club, it’s also accommodation, dining facility etc). I pocket it, and drag my gear to the elevator. As I ride up, my eye is drawn to the “Useful Telephone Numbers” poster. The very first one on the list was “Stables.”  Hmm.

Anyway, once I’m somewhat unpacked, I start to read the rules. I skip past the bit about what to do with your batman (seriously!?) as it didn’t seem to apply to me, and I hop over to the dinner section. After all, I’m a bit peckish. “Ah.. Hours. Excellent, dinner shortly…. What’s this? Dress code!?”

Apparently it is considered uncivil to be inappropriately attired for dinner. At the minimum, blazer and tie. Suits acceptable. I think back to what I packed, and realized that of all the things I failed to bring for a couple of weeks away with the Army, a suit was it. I start rooting around to see what I could cobble together.

To my regret, I never photographed the RAC Officer's Mess. This photo of the Royal Regiment of Fusiliers mess sortof gives the idea of the dining room though.

End result, I had the white shirt from the dress blues, the black tie and high-gloss shoes from the Class As, the dark ‘business casual’ slacks, I ended up looking like a reject from the Blues Brothers. In the meantime, the British officers played the easiest game of “Spot the Yank” in history. When finished with your meal, you were generally expected to adjourn to the ante-room for a while (even after lunch), which is as stereotypical a British facility as you can imagine, with wood-panelled walls, leather armchairs, and copies of the Times scattered around next to the tea and coffee pots.

There was a further knock-on effect: The night before my flight home, I had to stay in London. They wanted to put me up in the Household Cavalry barracks so I would have a nice convenient evening, but the dress code there was even more strict: One was not allowed to be seen leaving the barracks unless in a full-on suit. I had to stay at an RAF base a little outside of town.

They have a strange mix of formality to casualness: For example, in addition to the above requirements, the newest second lieutenant is expected to be on first-name-terms with the Major (usually company commander). US, not so much. “Sir” is considered a little more appropriate. Yet the US is often viewed by other militaries as being one of the most egalitarian there is.

Perhaps part of this can be demonstrated by the French.  I spent some time with the French Army in Afghanistan as they were our neighbouring battlespace owners and I was about the only officer in the squadron who spoke French.  (If it were a Spanish unit next to us, we’d have been sorted). We are invited to dine with the Battalion commander.

Now, let me show you a picture of our chow hall in Afghanistan. Pretty simple, really, rows of tables, cheap folding chairs, cardboard food trays, plastic cutlery. Open seating, you could be a PFC sitting next to a full-bird colonel. 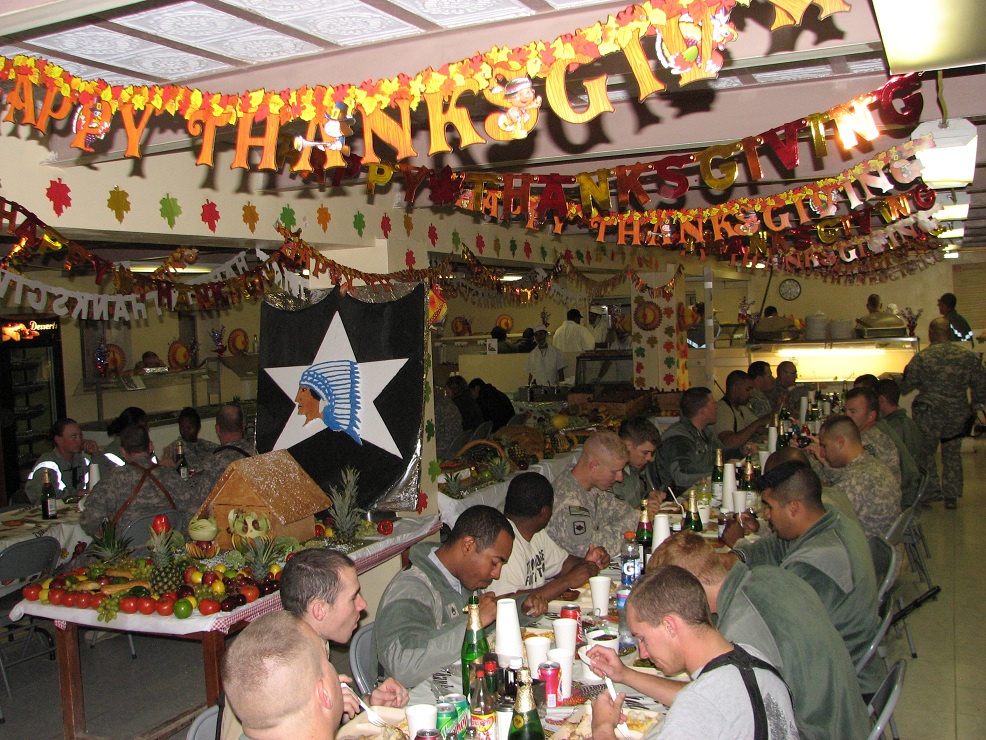 I didn't think to photograph the DFAC in its usual boring state, but remove the decoration and tablecloths to get the idea.

The French do things slightly differently. We follow our hosts around the buildings to the mess. We are brought to the bar, behind which a junior enlisted soldier is standing. “What can I get you to drink, Sir? Please note, alcohol may not be served before 1800.” After the ‘cocktail hour’ equivalent (we were there for lunch), we were seated at the table.

You will note that the table is a fairly solid affair, as are the chairs. The food was brought to us by more junior soldiers on the regimental china which had been brought from the unit’s base in the South of France. And, it must be said, it was excellent. One of my colleagues leaned over to me at this point. “You know, Nick, we’re doing this wrong in the US.” Perhaps, but I have a sneaking suspicion that were I to instruct an E-4 to serve me my dinner I would likely be best advised to not actually consume it. 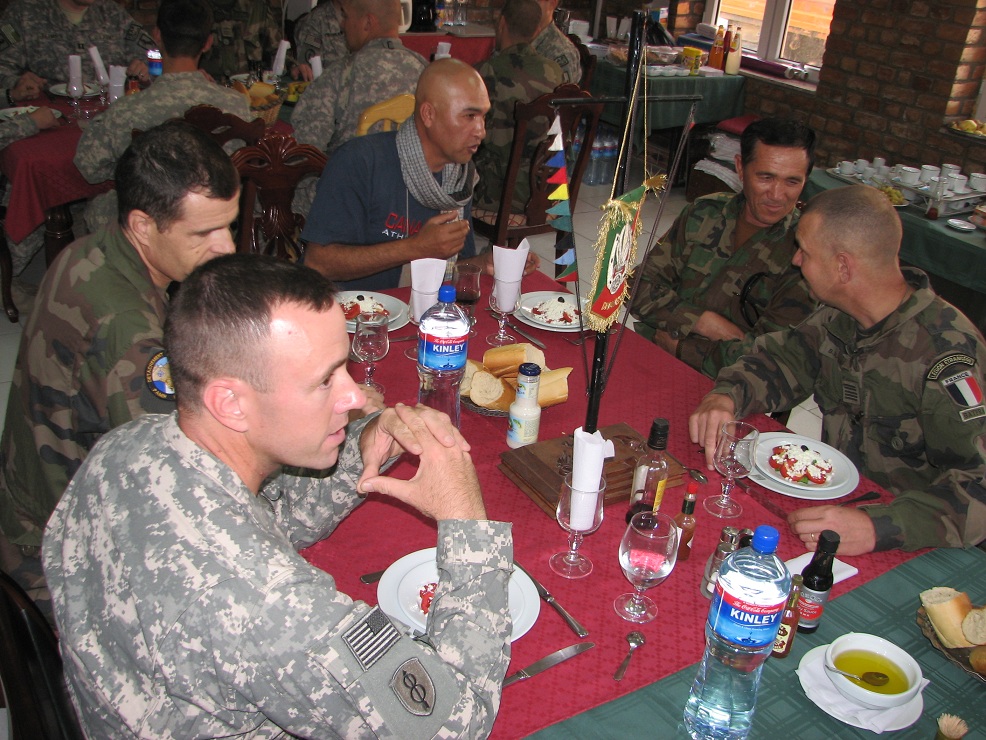 There was another food-related oddity. They had two soldiers in the unit whose sole job during the war was to bake bread. They were good at it, mind. I never had a shortage of volunteers to do the transport duty to drive us the two hours to their base, we'd stock up when there. I did inquire if we could borrow one of them for a couple of weeks, but I was told in no uncertain terms that if bread production were reduced, there would be a mutiny.

For those who are wondering, I have no quarrels with their soldiering. As an amusing side-note, they put me in a VBL named “Ricky Bobby”, it’s painted on the back door. 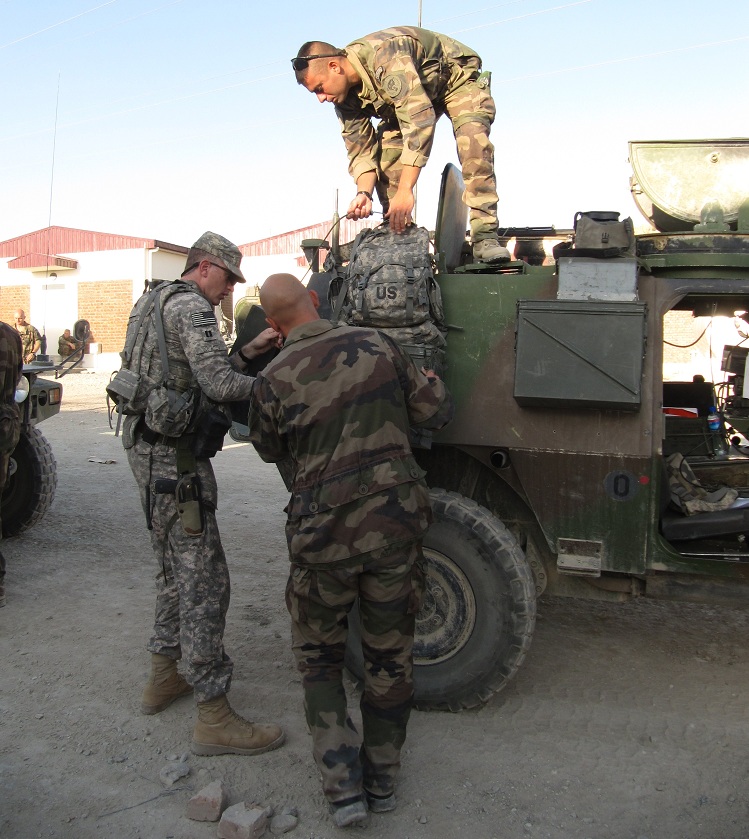 Adding an American to the load plan

I never did a tour in the Former Yugoslavia, but I’m told that such multinational missions have a bit of a tradition. It seems that first thing the Finnish army builds when they establish a base is a sauna. So if you feel like relaxing, hop over there. Then adjourn to the Irish facility: The first thing they build is the bar. I recall once seeing an Irish Naval vessel with what appeared to be depth charges lashed to the deck. I thought this somewhat odd given that I knew the ship had no sonar and I was unaware of depth charges in the inventory. Foolish me. They were kegs.

The Irish officer’s mess is far more down-to-earth than the other two above. As you can expect, it’s basically a pub, just a lot of the customers are wearing green. Can’t argue with that. They have their own unique problems, though. Being a rather small nation, they can’t afford to have many training areas. As often as not, the Army just finds a quiet little part of the countryside and has at it. 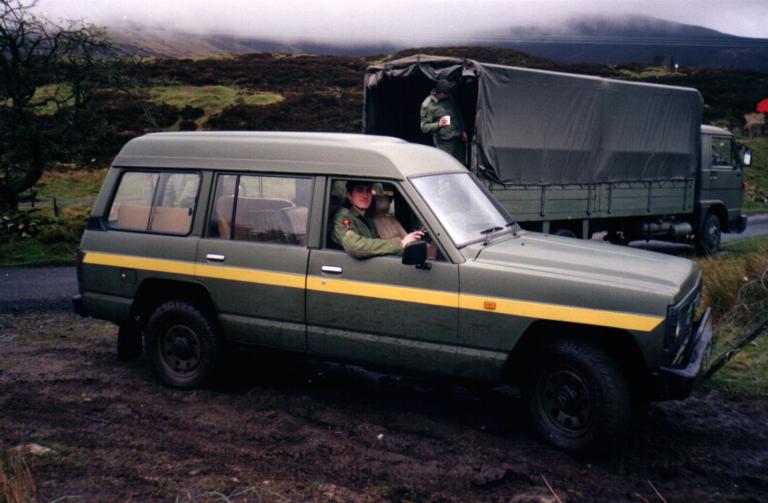 It can lead to occasional interesting incidents: I saw one time when a brisk firefight was taking place, with one team using a car for cover. A group of hikers came down the hill, walked through the firefight, got into the car, and drove away with the cover. Civilians could occasionally be mis-identified for participants in insurgent scenarios as well. I mean, what are the chances that a family would happen to be out for their Sunday drive in the Wicklow Mountains in a blue Toyota Camry, the same type of car that the insurgents used to shoot at a patrol five minutes previously a mile way? I recall seeing a Youtube video of a French Army training exercise in the middle of a shopping district during business hours, lots of shouting and runing around between the shoppers. A bit odd to my mind.

Of course, these are just amusing little annecdotes, there are many practical things to learn from our foreign colleagues and any soldier who thinks that there is nothing that other armies do better than his own is blinkered. Such observations I shall leave for a future article. In the meantime, go ahead, click the 'discuss' link below, and tell us all your culture shocks.

Senegal, and a Tier VII