The most accurate caption competition entry. 500 gold for nailing it. 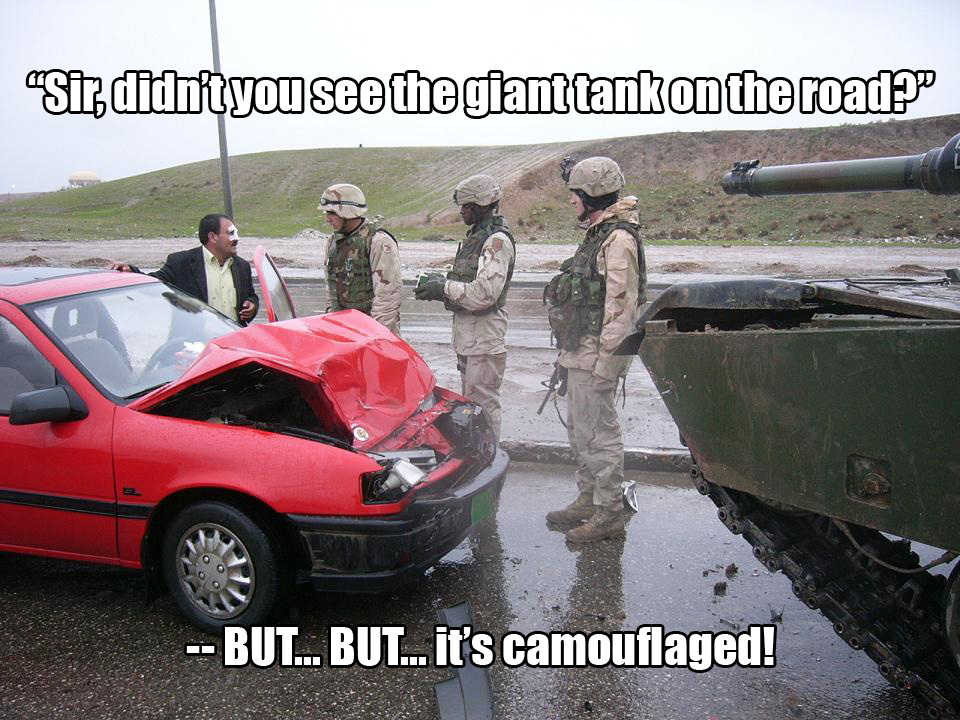 They say that there are few things as bizarre as real life. One of those things, which I experienced, was the odd situation of commuting to work in a tank. Standard sort of thing, really, get up in the morning, pull out the gate, join the flow of traffic… 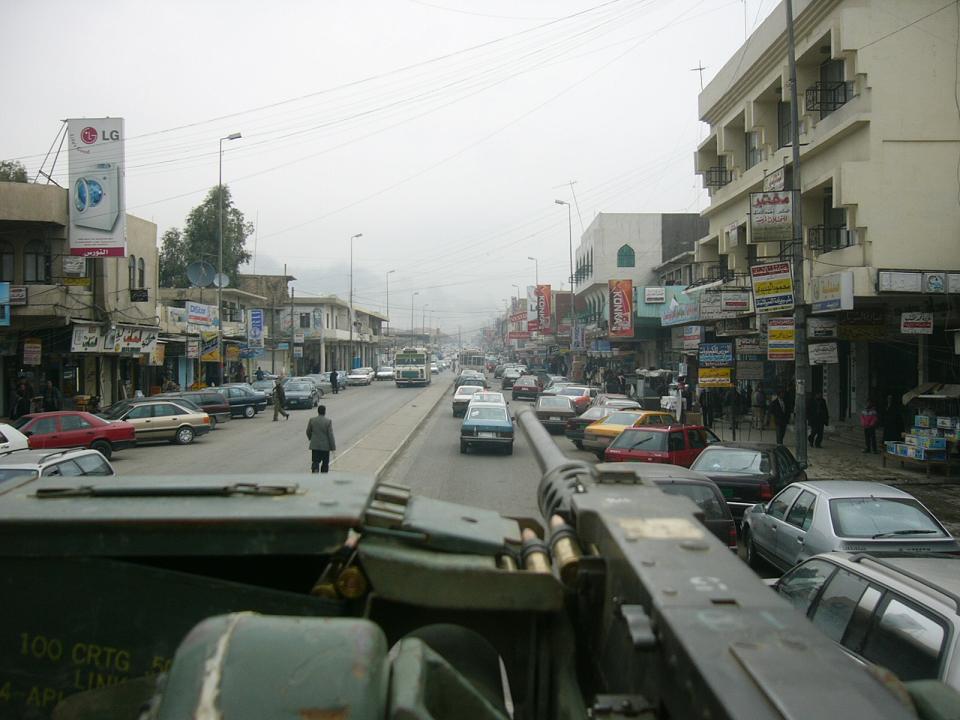 Only difference is that the vehicle’s a bit larger than most. Oh, and it has tracks. And a gun. And lots of armour. Come to think of it, there are a number of differences. Not least, as this caption entry demonstrates… 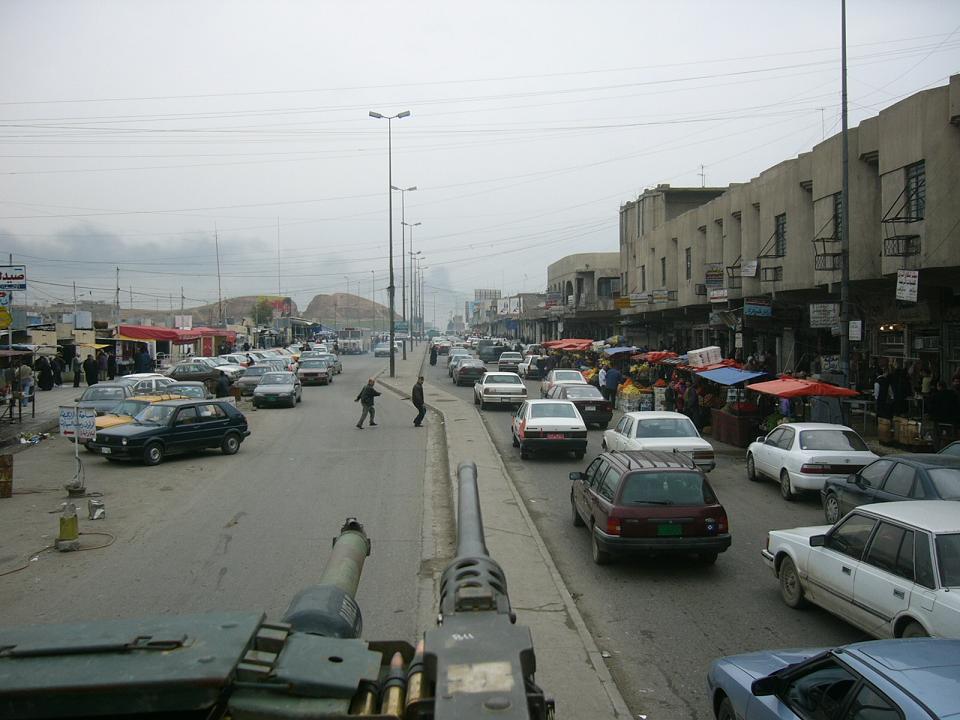 Of course, eventually, if you drive often enough, you’ll get into a fender bender. It’s pretty much inevitable. In this particular instance, it occurred at the following intersection.

It was a long day at the office, and it was time for us to return home for some food and fuel. Travelling East to West, we had to turn to the South at the intersection. Our convoy consisted of my tank in the lead, a HMMWV, an M113, another HMMWV and then a tank. Being considerate drivers as we were, I had halted the convoy at the intersection as we waited for a gap in traffic.
It was a clear day, though it had been raining a little earlier and the road was still wet. The road, as you can see from the map, is wide, fairly straight, and there’s a slight downslope from South to North, though granted this latter is not as visible.

With no traffic coming from the North, I looked South. Off yonder in the distance there was some oncoming traffic, a white five-door if memory serves. I figured, correctly, as it turned out, that this driver was going to stop when he saw our convoy start to move out into traffic. I was not, however, prepared for what happened next.

It transpired that behind the white car, there was a red Opel. Exactly what the thought process was of the driver behind the wheel will forever be a mystery to me, but I from my perspective, I can certainly hazard what I believe to be a reasonable guess.

It would appear that as the leading vehicle came to a halt, the driver of the Opel did not pause to consider as to why the car in front of him was halting his movement on an otherwise apparently wide and free roadway. One would have thought that especially as the place was something of a war zone, unexpected stops would be both not uncommon and something worthy of notice. Either way, his overtaking maneuver and acceleration was what gave us notice of his presence.

A vehicle suddenly appearing and accelerating towards you is something which would definitely attract your attention as a serviceman in Iraq at the time. Upon seeing this, I instructed the driver to halt his movement, and asked if the gunner would be so kind as to traverse the turret left a tad and ready his machinegun.

Meanwhile, back in the Opel, our driver is completing his overtaking maneuver. As most of you have probably observed, it is not unusual when overtaking another vehicle, for the two drivers to visually inspect each other. The one to see who the impatient person was who was overtaking them, the other to see the laggardly and inconsiderate person who was blocking traffic and requiring the maneuver to take place. I suspect that this was the action that the Opel driver was conducting whilst accelerating towards the rather large and dangerous object to his front. In the meantime, 7.62mm death was about fifty yards to the front: Had he crossed that invisible (and to him unknown) line, he would have been considered something of a hazard to our health.

That he eventually looked forward was evidenced by the sudden and enthusiastic application of pressure to the brake pedal. This was the second unexpected action in five seconds. It occurred that suicide car bombers likely do not slam on the brakes prior to impact, so we decided to hold off on the application of ball ammunition. It seemed more likely to be a bog-standard, common or garden car-meets-tank road traffic accident which was about to occur. Still, no point in taking chances, so I instructed the loader to drop down into his hatch, while I also dropped. Combined with the slight downslope, the wet ground, and the apparent lack of anti-lock brakes on that model of vehicle, the Opel continued to slide towards us. I watched through my periscope, as the car impacted under my left track, accompanied with a very slight shudder of the tank. After concluding that, indeed, the car was not blowing up, I had my driver pull out a few feet, and asked if the infantrymen in the HMMWV behind might wander over and chat with the driver. In the meantime, I dismounted to inspect the damage to my track (and take a photograph).
After patching the guy up, and a brief conversation with the interpreter, the troops return to their vehicle. The medic is shaking his head and smiling. I asked him what the Iraqi driver had to say.
“I asked him why he ran into the tank”
“And?”
“He said he didn’t see it. It’s camoflauged”

So that’s the backstory. To the competition.

It is evident that my sense of humour and that of the community at large appear not to be entirely aligned. The one picture that made me laugh sufficiently loudly to have people walk into my office to see what I was looking at turned out to be one of the least popular of the competition. Oh well.

There were often multiple variations on the same theme. In such cases, the finalist was the one which we felt had the most polished finish to it. Personally, I had an appreciation for the more unique entrants.
In any case, the third-place entrant was fairly clear. Congratulations, and 1,000 gold to Stepski.

Second place was unexpected. We hadn’t considered the possibility of a tie, but sure enough, a tie we had. So there is no second place. Instead, we have two first places. So, 2,500 gold and a round of applause for Dragonego and Allen.