An interesting footnote in the annals of Allied tank design can be found sitting in the back halls of the Bovington tank museum. And, of course, in World of Tanks.

The British of course had the Infantry tank series: Vehicles which had heavy armour and were designed to support the foot troops. Vehicles such as IS and Tiger were breakthrough vehicles, arguably performing much of the same function, though not as necessarily tied doctrinally to infantry.

Perhaps peculiar to the British system at the time, however, was the further designation of the Assault Tank. Exactly what it was compared to the other types of tank has been a little hard to figure out. David Fletcher is unable to explain it in his book “The Universal Tank”, and even in the US record of the ‘heavy’ programs, it makes a distinction in designation between the Heavy Tanks such as M6 or T32, and the Assault Tank T14 without quite explaining why. Then the US also had other designated assault tanks, such as the M4A3E2 and the T26E5, which in the records are not covered with the heavy tanks.

T14 certainly came first.  The British proposed an assault tank in early 1942 at a meeting between the Joint British Tank Mission and the United States Tank Committee. The US Army wasn’t all that interested, they said that they had no requirements for such a vehicle, but being good neighbours, they said they’d play along. The deal that was worked out would be that the US would build two pilot tanks based off the M4, while the British would build two based off the MkVIII Cruiser (The Cromwell family), and each country would send the other a vehicle to test whilst keeping the other.

On 30 March 1942 there was a joint meeting between representatives of the Office of the Chief of Ordnance, Aberdeen Proving Grounds and the British Tank Mission to flesh out the idea a little more. The British weren’t mucking around, they estimated a requirement for 8,500 tanks to be produced. Aberdeen was instructed to do some preliminary work and build a wooden mockup. The detailed characteristics for the vehicle were drawn up by the Ordnance Committee in May 1942. This meeting also gave the project the designation T14.

The purpose of this development was to provide a heavily armored tank which would be used primarily as an assault tank in cooperation with Infantry, either in attack or defense. It was to have a comparatively low unit ground pressure and moderate speed, and to use standard Medium Tank M4 components wherever possible. It was to be a five-man tank based on Medium Tank M4, with a maximum armor basis of 4 ½” and weighing 46 tons. Principal armament was to consist of a 75-mm Gun M3 (or a 57-mm Gun M1) and a Cal .30 .Machine Gun M1919A4 (flexible) in a cornbination mount in a power-operated turret, with gyrostabilizer. Additional armament was to consist of a Cal. .50 machine Gun M2 HB (flexible) in a turret hatch race mount and a cal .30 machine Gun M1919A4 (flexible) in a front plate ball mount, with provision for carryinga cal. 45 submachine gun. As originally planned, the tank was to be powered by the Ford V- 8 tank engine, with provision for later installation of a Ford V-12 engine.

By agreement between the British and the Ordnance Department, several changes in military characteristics were made and recorded by Ordnance Committee action in September 1942. These were:

(c) Provide two escape doors in turret roof instead of one 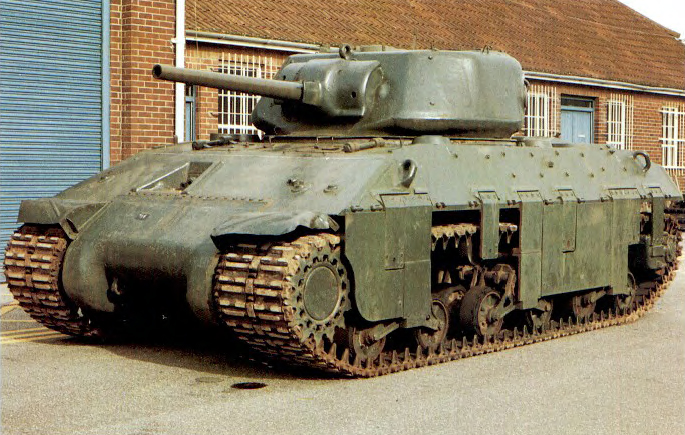 The T14s undertook testing in the US from July 1943. Several months of testing revealed a number of flaws beyond the scope of this article, but suffice to say it was just as well that the vehicles were tested before one was sent to the UK, as fixing the problems would have been problematic once in Europe. The two pilots were generally identical, except for the power traverse: Westinghouse for one tank, and Oilgear for the other. Which one went to England, I cannot say, but it was shipped in November of that year, where it remains.

The British counterpart wasn’t significantly more successful. A couple of half-hearted requirements were laid out: A28  barely got anywhere, A31 was described as a Cromwell hull with skirts and a Churchill turret, and A32 doesn’t seem to have progressed even to the drawing board.

Eventually steel was put together in the form of Assault Tank A33, which was named Excelsior. At first glance, one would have to look hard to see the Cromwell influence: The sideskirts and the suspension gave it a significantly different appearance. But a second look reveals the familiar stepped front hull and boxy turret. Under the hood one could find the Meteor engine and Merritt-Brown gearbox.

Similar to T14, the two vehicles were not identical, though in A33’s case, differences were external.

The first vehicle, armed with a 6Pr gun, could be easily identified through the side skirting which did not enclose the track return. The volute bogie suspension was basically lifted from the M6 heavy tank, of which about 60 were supposed to have originally been supplied to the UK, which shared the open-track-return design of side skirting.

The second vehicle, with the British 75mm, had fully enclosed skirting and is the vehicle on display in Bovington today. Its suspension was also of a bogie type, using larger wheels and coil springs. Called RL (the designers were Rolls Royce and LMS Rwy), the exact details are something of a mystery to me, and I must more closely examine the vehicle currently on display in Bovington: The skirting is annoyingly effective at protecting the suspension workings from photographs. 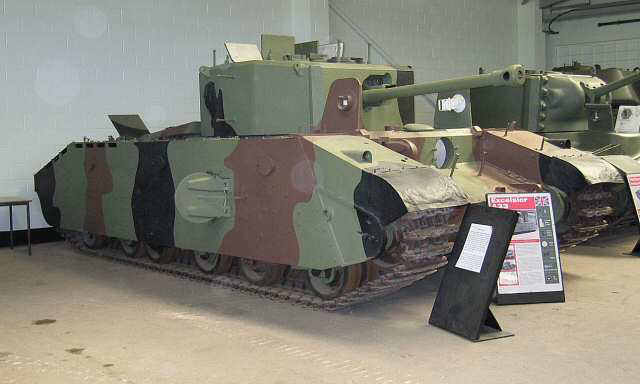 In any event, the program was nixed before the second vehicle could enter any serious testing. The first one, however, did manage 2,000 miles before wearing out and vanishing.

This was not the only attempt at an assault tank the British would come up with, however. The A38 Valiant has a particularly special place in David Fletcher’s heart, go to 19:10 in this Operation Think Tank video to hear his rant. The idea was a little different to Excelsior, the goal being to create a much smaller assault tank for use in the Far East. The end result was particularly awful, but was at least small and well armoured.

Undeterred, there was a proposal for a Heavy Valiant, which supposedly would have effectively given the first A33 a pike nose and slightly bigger turret. With 10” of turret armour and 9” of hull armour, whilst only weighing 2.5 tons more than the 4.5”-armoured Exelscior, it may well have been a remarkable effort of optimism in the ability to design to specification triumphing over the reality of it.

The last significant entrant into the field was Nuffields and its AT (assault tank) series, starting at AT-1 through AT-18.  The progression was rapid: AT-2 of 13 May 1943 was a small casemated affair with a 95mm CS gun of 41 tons, by AT-6 of 31May it had moved to an autoloading 6pr, 20mm and flamethrower at 43 tons, and by June 26th the designers figured they had improved their technology to make a 45-ton AT-10, also with a 6pr (non-autoloading, allowing wider traverse), 20mm cannon and a machinegun turret or two. 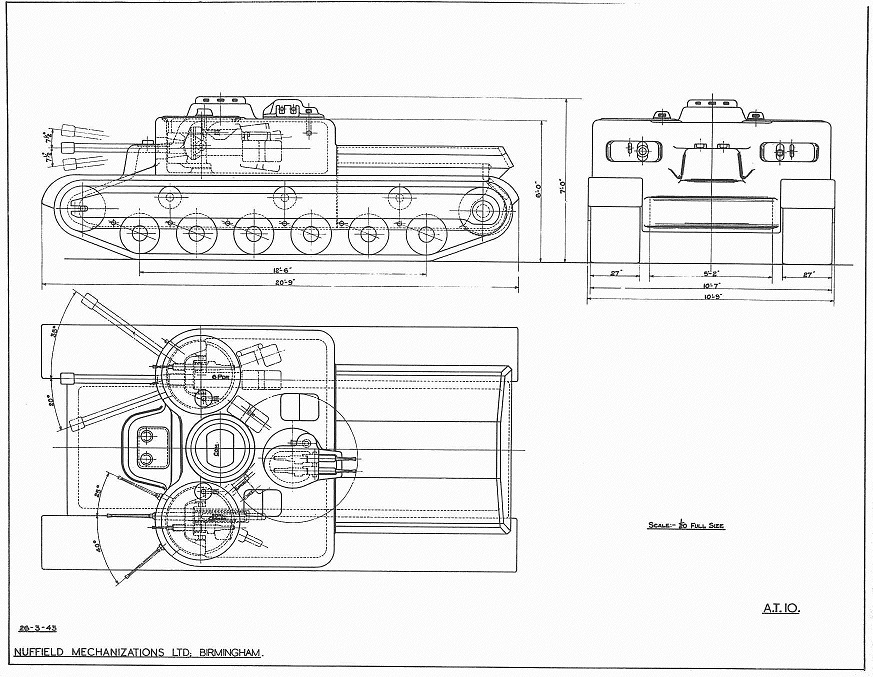 Ever eager to please, Nuffields modified the design a bit more, with the AT-16. The 3.7” anti-aircraft gun was modified a tad to fire only a 32lb projectile, which was deemed to have better ballistic performance. Persistance paid off, an order for 25 was placed with delivery in Sept of 1945, as A32 “Tortoise.” Of course, as events were to show, the war was completed before the vehicles were, and only five were produced. 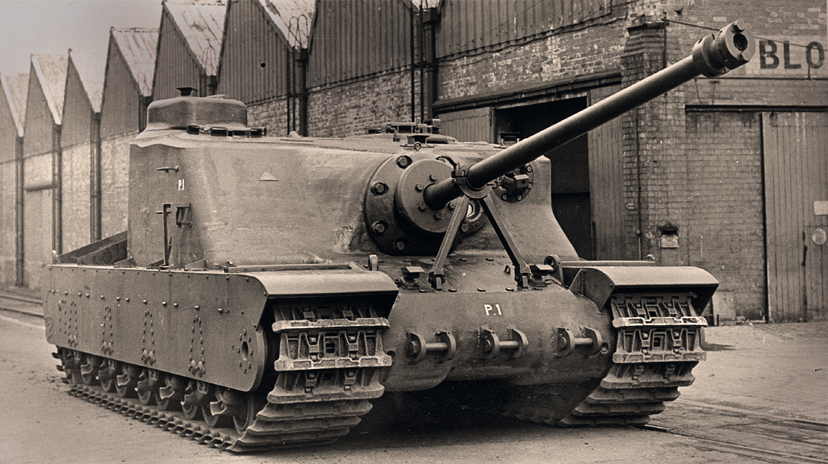 And that brought an end to the British assault tanks.