Sitting way down at Tier II on the German line is a little tank which a lot of people seem to generally blow through on the hunt for something a little cooler. Like a cat. So why not take a second look at it here?

In this segment of Operation Think Tank, Steve Zaloga made the comment that what would become the PzKpfw 35(t) was basically a copy of the Vickers 6-ton. This caused a little bit of consternation over on the Czech sub-forum over on the EU server, they didn’t seem so keen on that statement. However, one probably has to start back at the Vickers anyway, to decide for yourself. 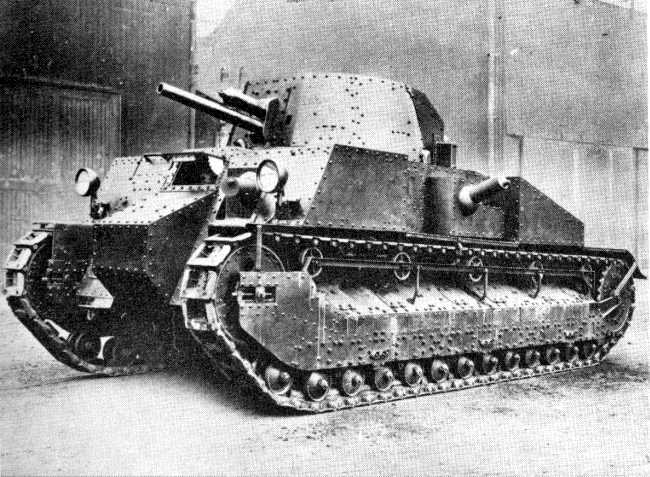 Vickers was doing moderately well in the tank scene in the 1920s, being the primary producer of tanks for the British Army. In the mid 1920s, they decided to try branching out into the commercial marketplace. The Mark A and B, of which I cannot find a picture after a cursory search, were described by Fletcher as being “bulky designs, even when compared with the British service mediums, and unlikely to appeal to any potential customer.” The Mark C, pictured above, did a little better, being sold to Japan and Ireland (Mark D). Japan didn’t think too much of it in the end, but there is a startling similarity between the Mark C and the Type 89 which they did produce domestically. Coincidence? Who knows… 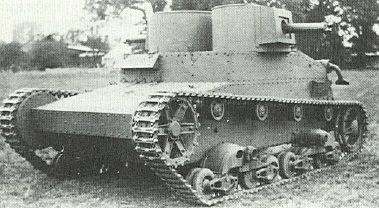 The revolution came in 1928 with the appearance of the Mark E, the prototype of which is pictured above. (Note the high engine deck). Now, there’s going to be a little bit of form following function here. We have a small little tank, with a long-ish glacis, front-drive/rear engine, and (in the single-turret model), a fairly well-sized turret with a two-man crew. The nature of the bogie cluster suspension was a bit more unique though. This vehicle wasn’t half bad by the standards of the time, and as Mr Zaloga says, it became the most influential design of the inter-war period. 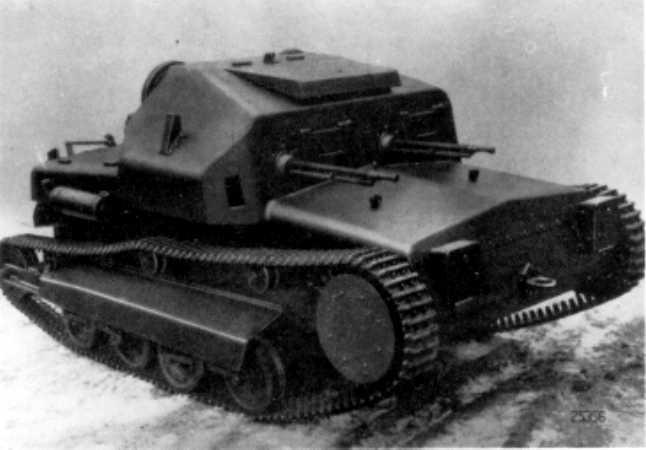 Skoda hadn’t started building armoured full-tracked vehicles by then, it wasn’t until the early 1930s that the MU and MUV (Malay Utocny Vuz: Small Attack Vehicle) series started appearing. The MUV-4 above of 1934 was a tankette of a whopping 2.5ton. By 1934, though the Czechs had decided to stop mucking around in the kiddie pool and build themselves a proper battle tank. The result of Skoda’s efforts was the SU. 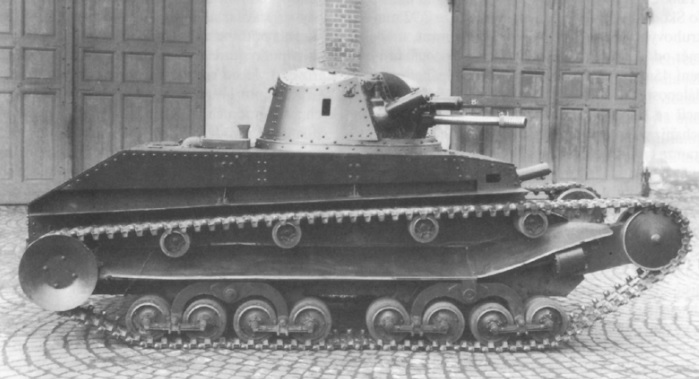 Now, though the Czech Ministry of Defense had put a 15 ton cap on the weight limit of their battle tanks, Skoda’s SU was all of about 7.5 ton. If you wanted to make a 7.5 ton designed tank with a central turret, it is probably going to look a bit like the British 6-ton design (which usually weighed in at about 7-8 tons) simply by its nature. The two significant differences were that the driver was placed a little more forward than in the 6-ton, and the sprocket wheel was at the rear. The suspension is the grouped bogie pair type.

This was improved upon by the production in June 1935 of the first of the S-II-a tanks. (Skoda, light, cavalry), which would eventually be known as the LT Vz 35. (Light tank, model 1935). Now, there is nothing in the records that I’ve seen to state that this was a deliberate offshoot of the Vickers Mark E, but it is also highly unlikely that the Skoda designers weren’t looking at it. Indeed, Spielberger describes the suspension as “the running gear adopted from Vickers in Britain” with improvements (Most specifically, an extra wheel between the idler and first roadwheel). The 6-speed gearbox was also British, built under license from Wilson. Copy of the 6-ton? No, obviously not, but I think one would have to give Vickers a little credit in the inspiration.

Now they were getting somewhere, but still 675 improvements had to be made in the design before it could properly be built by CKD and Skoda. 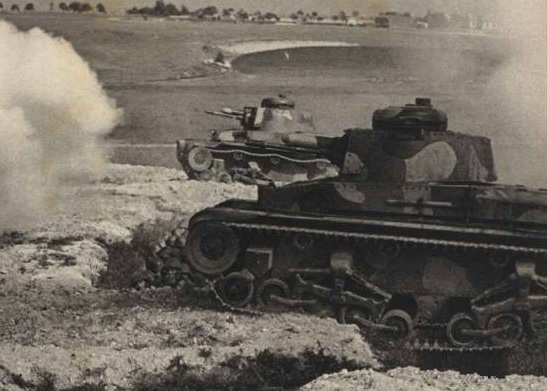 In any case, it was a fairly impressive design, and proved almost invulnerable to the problem of throwing track. On the downside, it was maintenance intensive, and suffered from having a one-man turret. 298 were delivered to the Czech Army, where most of them were promptly ended up being pressed into German service (Two ended up in Hungarian possession somehow, and some 50-70 were to the Slovak Free State). Of the 240 or so left over, most of them hadn’t yet had the reliability modifications applied by the factory, and some were just completely broken down and off the books. An improved version with independent suspension had also entered production, so the 35 was already obsolescent.

Still, they were 200 or so tanks left over which were reasonably well regarded by their former owners, so the Germans gave ‘em a bit of a try at the Milowitz training base. Not bad, but definitely in need of some tweaking. 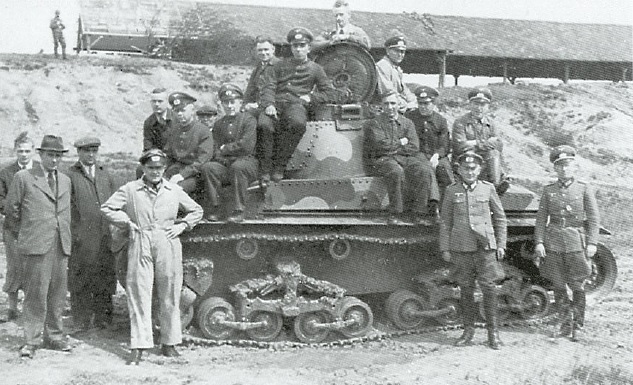 Firstly, the one-man turret had to go. Or at least, somehow find a way of squeezing a second man in there. As a result, they threw a loader in there anyway (no seat, of course), to reduce a little of the TC’s workload. He could also operate the turret machinegun. (This was a selctable ball mount, not just a coaxial, and could be independently aimed). Another problem in the turret was communications: When built, the Vz 35s had none. The Germans installed an intercom system, which included long cables which ran from the hull into the turret as the turret had no commutator ring. One can imagine the problems. Newer, more powerful radios were installed in the hull as well, with some tanks even being fitted out as Befehlswagen (command tanks).

With these modifications made, the Vz 35 entered Wehrmacht service as the le. Tank Skoda Modell 35. (Or for short, L.T. Sk.M.35) and the Panzerkampfwagen (3.7cm) “L.T.Sk.35” depending on who you asked. By 1940, however, an official decree standardized it as the Panzerkampfwagen 35(t). Still, units often referred to them as Pz.Kpfw. Skoda, or even Pz.Kpfw. III(t). This latter because they were issued as equivalents (and replacements) for the Pz.Kpfw. III, even though the latter was far superior. 6th PzDiv got the lion’s share.

In any case, when it became time to go squash Poland, the German inventory officially held 202 L.T.Sk.35s. Their reliability rates were pretty horrible, with their breaking down substantially more frequently than the Pz IIs and Pz IVs which accompanied them. Still, they were tough enough to resist the small (2cm and less) anti-tank fire usually aimed at them, and only seven had been removed from the inventory  after the campaign. After giving the Bulgarians a couple of dozen, and pulling another couple of dozen out for major repair work, 143 were still on the books to invade France with. Again, reliability appeared to be an Achilles’ heel, with Pz Rgt 11’s 76 35(t)s being repaired 383 times by the company workshops (Figure from Panzer Tracts). This didn’t count those which had to be sent to the rear for major repair works. With insufficient rail transport available, replacement 35(t)s were not dispatched by the depots as they didn’t believe the tanks were capable of getting to where they needed to on their own without breaking down. 62 35(t)s were written off in the campaign in the West.

The last hurrah for the 35(t)s came against the Soviets in June 1941. 6 Pz Div had 160 on strength when they started. They didn’t last too long. By the end of November, not a single 35(t) tank was operational (A couple of Befelhswagen were still running). No repair parts were being manufactured, and cannibilisation could only go so far. They were certainly still around, the Germans reported owning 187 of them in June 1942, but none were in active use.

And so thus ends the story of the 35(t). If you want to see one of your own, there are still a few out there, but you’ve got to go to Europe (More specifically, Serbia, Romania, Bulgaria or the Czech Republic). There was one skulking in Aberdeen, MD until recently, but I’m not sure where it is at this second or if it’s on public display. As for Vickers, well, you have to give them some credit for helping the design along, but we’ll return to the Vickers story later. 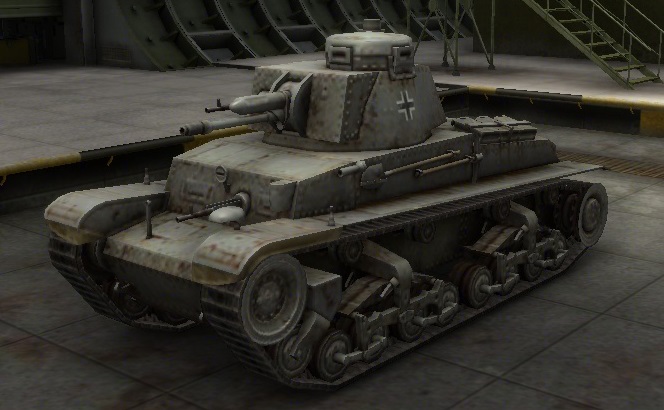