I’m sure a number of you have seen a photo of an M24 sitting on a German suspension system. Here’s the backstory.

In 1946, the various R&D teams seemed to be looking for things to do. One of the post-war evaluations, which probably seemed like a good idea at the time, was to evaluate and compare various types of track and construction.

Satisfactory comparative tests of American and foreign tracks and suspensions had never been conducted, laboratory soil studies and tests of vehicles in adverse going, and newer theories of soil action under tracks, as set forth in Canadian Technical Memorandum #6 were still too theoretical to have a direct practical application. So, the best way to find out what would really happen would be to try it out, right?

So, under the oversight of an LTC L. B. Hopkins, they set about this test. The project started as a study of the German 3/4 track suspension and needle bearing; track but was later expanded to include foreign tracks and suspensions.

The Sd.Kfz. 8 in the process of having its suspension removed

The German interlaced suspension and needle bearing track was chosen because it was thought to combine in general, the two outstanding features of foreign tracks, i.e. more points of contact with the ground and a greater pitch track. (Official answer. The unofficial answer is that it fit most easily) Other factors thought to contribute to better overall performance were the elimination of top support rollers, use of larger road wheels, and what amounts to a dual purpose track. This track has small rubber pads which afford good control on hard surface and act as grousers in soft going. It must be pointed out that this particular track and suspension was not used on German tanks but did lend itself to adaptation on a Light Tank T24 hull and made for an interesting study. It was also considered possible to mount an American track and a Russian track on this suspension. Plans were to include the following vehicles in the tests:

It was thought, therefore, that engineering field tests of the interlaced suspension with various combinations of tracks in comparison to a standard U. S. suspension on the same type vehicle would provide an immediate and adequate basis for evaluating the relative merits of these. Taking the tracks off the halftrack and onto the M24 was expected to take some four or five weeks. 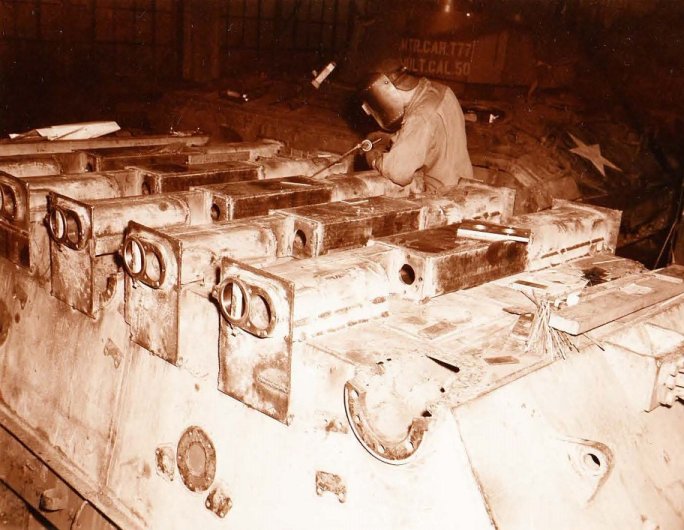 The M24 being fitted for the German torsion bars

The materiel used in the test conducted thus consisted of a prime mover suspension adapted to the Light Tank M24. There were several concerns noted before the work was even completed:

Though the wheelbase of the system would remain the same, the angles of approach and departure would be dramatically increased. The halftrack suspension was also mounted with the torsion bars above and below each other, whereas on the M24, they had to mount them side by side to avoid raising the height of the vehicle too much. This would cause the running gear on one side to be about 4” further forward than the other side, with some question being raised as to whether or not this would have an effect on steering, or as the notification letter put it, “cause the vehicle to leave the road”

Light Tank M24 No. 594 was equipped with the tracks and suspension of a German 12-ton 3/4 track prime mover. The turret was removed to bring the overall weight down to approximately 32,500lb which is roughly the capacity of the suspension as used on the prime mover. Note that this means that the photograph going around the web of an M24 with the German suspension and with a turret is a fake, manipulated photo. This resulted in a modified Light Tank M24 with a 16" -needle bearing track and interlaced suspension. The hull was raised approximately seven inches as a result of the modifications.

Resistance to traction data was then obtained towing the vehicles

a. With the transmission and transfer case in neutral, final drives connected.

b. with final drives ,disconnected

Deceleration data was obtained on both vehicles on concrete by recording the distance the vehicle coasted from various speeds.

An attempt was made to measure the road load and full load resistance using a propeller shaft torquemeter. It was, however, not possible to calibrate the torquemeter accurately within the range desired.

It was further planned to obtain drawbar pull vs track slip data in mud of the two vehicles and of the interlaced suspension with the Light Tank M24 and the track from the Russian Tank T34. By the use of a special sprocket and the roller drives from the Russian sprocket, it is possible to adapt the Russian track to the suspension on the Light Tank M24 (No. 594) with the German interlaced suspension. No tests were run with this setup because of difficulties with steering. It was also planned to get comparative drawbar pull vs track slip data in mud using the Russian T34 tank, the German Panther IV (sic) tank, and US medium and heavy tanks for an over-all comparison of various suspensions and tracks in mud.

The deceleration characteristics determined by coasting from various speeds were as follows:

d. At 5 mph the vehicles coasted 60 ft and 30 ft respectively

The coasting distances were approximate because some steering was necessary.

From the above results both in terms of towed resistance and in terms of deceleration, it can be seen that the resistance of the German track, the track engagement and the bogie wheel resistance all added up to less power consumption at low speeds on hard pavement.

All attempts to operate the vehicle in mud were futile because at every attempt to steer the track came off the idler or sprocket – usually both, and both tracks. Presumably this is the result of the angles of departure and approach, and maybe the torsion bar positioning, as noted before the tests were started.

This installation was not considered good for a study of ride characteristics because the sprocket and idler did not permit the top of the track to be level and in steering and braking the track slapped considerably. Also because of the slack track, considerable difficulty was experienced in attempting; to operate the vehicle in mud, and the tracks were thrown in every attempt to steer in mud. The rubber pads did not appear to be very durable, and a track shoe would pound itself to pieces very quickly if operated without the pad. The road wheels get out of line and were easily damaged. An attempt was made to get replacement pads from the ETO. None were ever received. For this reason no extensive operation involving; performance or durability was possible. The needle bearing track was noted as being a luxury track discarded by the Germans in the latter part of the war due to cost and delay in production.

The test report noted that since ample power was available in the Light Tank M24 for propulsion at low speeds, there was no advantage to a somewhat less power consuming suspension at low speeds on hard pavement. The adaptation precluded any testing in mud.

Finally, the report noted that no further testing was warranted and recommended that testing on this project be discontinued and the project be cancelled.

*Bizarrely, I have noticed a common trend in US Army documents to apparently refer to ‘panzers’ as ‘panthers’ regardless of the mark number, excepting the Tigers. This is not the first time I’ve seen “Panther IV”. At this time I have no explanation for this trend.