In my most recent trip to the Archives, I ran across a section of files of observations from the front. I'll be going over a few of them, and I'm starting with a series of responses from North Africa, compiled in June of 1943.  Here's the overview.

Report on Antitank and Antiaircraft Requirements in the North African Theater of Operations.

1. The following report is rendered in compliance with verbal instructions received from the Commanding General, Army  Ground Forces.

It is the concensus (sic) of higher unit commanders interviewed in the North African Theater.

a. Troops lost all confidence in the 37mm antitank gun due to lack of high velocity ammunition initially and to the ineffectiveness of the weapon atranges of 1000 yards and over. 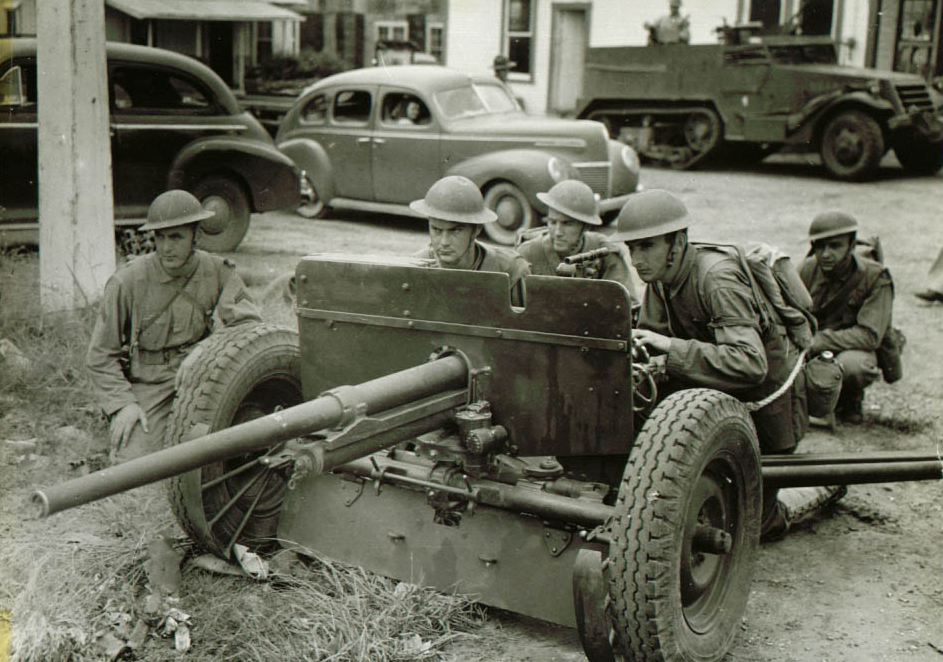 b. Test firing conducted in that theater using high velocity ammunition proved the weapon effective against most tanks at 300 to 500 yards but did not restore confidence of troops, this must be reinstilled in new units in training in the United States.

c. Two types of weapons are desired by the Infantry; one for battalion antitank units and one for the regimental antitank company. Killing range, weight, maneuverability and weight of ammunition must be considered in assigning antitank weapons to forward elements of the Infantry. The battalion weapons should be as light and maneuverable as possible but capable of stopping tanks at 300 yards. The regimental weapon should be capable of stopping tanks at 1000 yards and may be somewhat larger, heavier and less maneuverable.

d. The following weapons are recommended:

(b) Present 57mm tube and cradle mounted on the 37mm antitank gun carriage. This gun to be equipped with a muzzle brake and tree traverse if practicable and not to exceed 1500 pounds in weight.

(b) 3-inch or 76mm HV tube and cradle mounted on the field howitzer carriage.

a. Proposed ratio of one .50 caliber machine gun for each four vehicles appeared to be adequate organic antiaircraft protection.

b. All vehicles should be drilled to permit easy installation of a suitable .50 caliber machine gun mount.

d. Antiaircraft defense of combat units must be supplemented by the attachment or one antiaircraft automatic weapons battalion to each infantry division where in combat.

e. General Patton recommended production of a 40mm cannon flanked by two .50 caliber machine guns mounted on a light tank, half track or armored car chassis for antiaircraft protection of armored units. These weapons to be attached in the ratio of one per tank company and one per armored artillery battery.

f. Control of antiaircraft weapons should be vested in the division artillery commander.

a. Opinions on this subject vary widely, the majority favors towed guns for this purpose which maybe due in part to prejudice against present equipment (75mm guns and howitzer on half-tracks and the 3-inch M10).

b. Properly employed, I believe self-propelled weapons, low in silhouette, highly maneuverable and faster than tanks should prove more effective than towed weapons. A weapon of the T70 type appears satisfactory. All tank and tank destroyer weapons of 75mm caliber and larger should be equipped for indirect laying.

c. Tank destroyer battalions should be attached to supplement the organic divisional antitank weapons. Control should be vested in the division artillery commander.

There were then a number of annexes. I’ll go through two of the more interesting ones here. These were survey questions that AGF thought was of particular interest, which the field units were to respond to. Usually surveys of this sort were distributed to the battalion level, and both the battalion answers were provided, with a summary document for the Divisional or higher levels. For TDs, two questions were posed.

1. There has been both favorable and unfavorable comment upon the tank destroyer weapon consisting of the 75mm gun on the half-track. What is the thought of the using troops regarding this equipment?

The gun itself is satisfactory, but is extremely limited in traverse and the vehicle must be turned around to fire in withdrawl. The vehicle lacks mobility, is too distinctive in shape, the silhouette is too high, is open and exposed to air attack and the maintenance difficult due to failure of parts unsuspected of weakness for which no replacements were available. The No.3 cannoneer has a choice of two positions each equally unsatisfactory; either on the poop deck exposed to hostile fire, or down in the well where he must dodge the recoil.

A mount with lower silhouette, more maneuverability, more easily dug-in or concealed and of less distinctive appearance is desired. The ideal weapon should consist of an engine, a pair of tracks, a platform and a gun.

2.   Has the 3inch gun motor carriage, M10 (3 inch gun M4 medium tank chassis) been used in combat? If so, what comment is there concerning its efficiency?

In general, those who have not fought this weapon want it, those who have, don’t want it. It is believed that the weapon was tactically, incorrectly employed. At El Guettar it was sent out to “chase” tanks and 7 out of 18 were lost in five minutes' time. It is too large and high for easy concealment or digging in for ambush, the sight provided is not commensurate with the capabilities of the gun. Considerable trouble has been experienced with broken traversing gear housing due to failure to lock the traverse when in motion. At least one more traversing lock should be provided and the traversing gear housing reinforced. A yoke should be provided to rest the tube when in travelling. General Patton recommended that we stop building these weapons, that those now in existence be equipped with more front armor and a top for the turret, issued as tanks, and gotten rid of.

3.  Considerable difference of opinion exists regarding the proper weapon for tank destroyer use. The majority of tank destroyer officers who have been in combat consider the role of the tank destroyer to be a defensive one. If this hypothesis is correct a towed gun should be the primary weapon of tank destroyer units augmented by self-propelled weapons or anti-tank tank units in corps or army troops.

On the other hand, anti-tank defense of the infantry division, which now consists of towed guns, must be reinforced by powerful, highly mobile weapons for flexibility. This requirement indicates a self-propelled weapon.

Recommend that tank destroyer units be equipped with high velocity, self-propelled 3-inch or 76mm guns, of low silhouette to permit easy concealment and digging in such as is described in paragraph 1, above.

And one annex for Armored Force.

1.  Have any Krypton Lights arrived in the theater

2   How are they distributed to Armored Force, Infantry, Tank Destroyer, etc. and in what numbers in each?

No Krypton Lights had been seen by the 1st Armored Division. None were seen in the theater by this observer

None issued. These lights are much desired by armored force units for purposes described in the above question

5.    Have the 14 Radio Sets SCR-522 (Recently shipped to North Africa) been installed in tanks and half-tracks? Has the installation proved satisfactory for the transmission of rapid call for air support? Has a system been worked out? Has it proved to be of value in battle?

Some of these sets are apparently in the theater (Hear say). One was located at II Corps at Gafsa. No instructions regarding desired disposition of the sets accompanied the shipment. None are issued to the 1st Armored Division.

6.  Has any correction been made to prevent sights on the 37mm gun in the light tank from getting out of line? If so, what has been done?

No, nothing. A new method of mounting this sight which will permit proper boresighting is required. More powerful direct laying sights with better reticles are necessary. [Chieftain’s note: There is a hand-written note, we have them. 3x under this line]

7.   Have any courier-liaison airplanes been used in battle? If so, how did they perform? In what other ways have they been used? 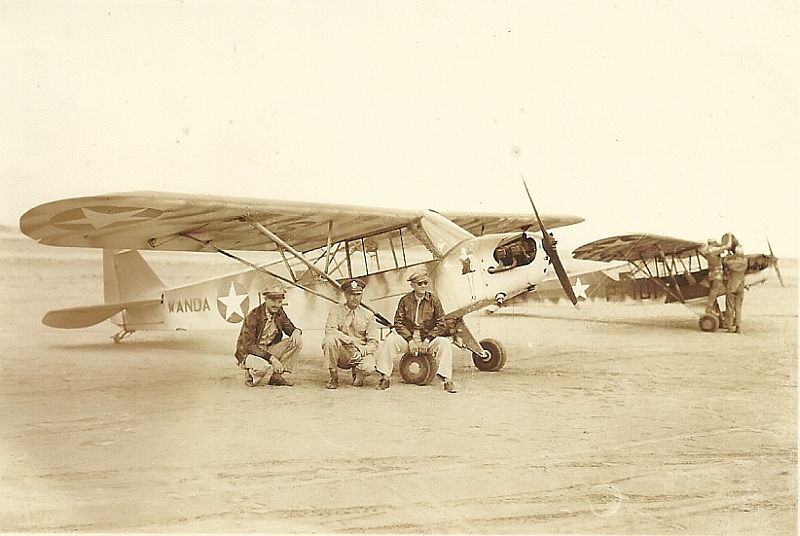 The planes were little used in the Gafsa area for adjustment of fire. General Patton considered them of doubtful value, stating that our own troops fired at them and that plenty of good ground observation posts were available. Personnel of the 1st Armored Division considered the planes extremely valuable, stating that they were used for reconnaissance, location of targets, messenger service and staff transportation.

6.      What actual evidence is there to prove that Armored Divisions require anti-aircraft protection in addition to the organic means provided? What means are now provided?

.50 Caliber vehicular weapons are now provided by diverting these guns from other missions. .30 Caliber guns are worthless for fire against aircraft. Trains, armored infantry and our artillery requires anti-aircraft weapons to keep hostile planes away. The .50 calibre guns now provided are insufficient in numbers to accomplish this purpose. These elements were attacked frequently prior to Faid-Thala and El Guettar actions. During these two fights, half-tracks mounting 37mm cannon flanked by twin .50 caliber machine guns were attached to the 1st Armored Division. This weapon was responsible for shooting down over 50% of the hostile planes brought down by ground fire. Planes coming in to attack swerved and dropped their bombs elsewhere when these weapons opened up or were spotted by them. One battalion of these weapons per armored division should be normal attachment to provide a ratio ofg one per tank company and per field artillery battery. 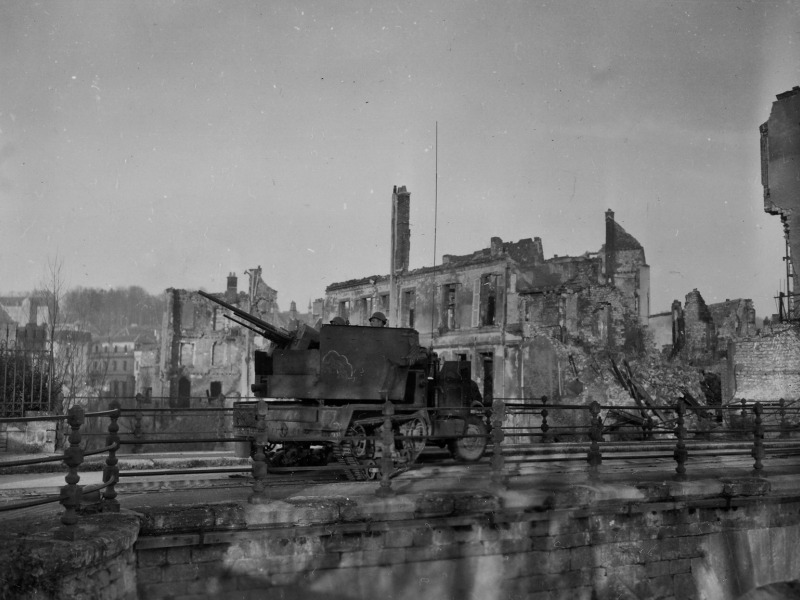 7.  Are there any particular weaknesses in arms and equipment of armored forces that have come to your attention? If so, what are they?

The following weaknesses were reported by armored force unit commanders:

8.  Is there any requirement for any additional weapons or items of equipment? If so please list them and give reasons.

I think it is interesting to note the priorities here, both in the questions from AGF, and the reponses from the field. I'm not too sure about that last suggestion, mind.

Anyway, let me be the last to wish you all a happy and prosperous new year. Bob will take you to the forum. Also, note I have a Facebook page and Youtube channel.

My First Job of the New Year
Next
Select a region
Selecting another region may affect the website content.