There is a somewhat tantalizing amount of information on the conversion of an M18 Gun Motor Carriage in mid-1945 to mate with the turret of the 90mm Gun Motor Carriage M36 in Hunnicutt’s Stuart, but it doesn’t really go very much into the background. I’m going to fill in a few gaps.

The Tank Destroyer Board gave the matter some fairly serious consideration at the beginning of the year. Army Ground Forces had asked Tank Destroyer Branch to look into the effects of having TDs with bigger guns and heavier armor. The response was dated 18th January 45. Although the study actually looked into more depth in general configuration (responding that if a TD was created to 12th Army’s requirements of guns, machineguns, armor, you’d effectively have a tank), the following was pertinent to the up-gunning proposal.

To convert the present considerable stock of unassigned M18s to 90mm vehicles would require, after development, experiment and test has been completed, an unpredictable number of months. This would tie up this stock of an admittedly efficient weapon. The weapon resulting from the change would have, with present ammunition, about 1” greater armor penetration in the zone at which dependable sighting against tank targets is possible – out to about 3,400 yards. This additional penetration will not include the front plate of enemy heavy tanks. These front plates, now penetrable by the 76mm gun Hi-Velocity, T4 round out to 1,200 yards, would be penetrable by the 90mm with the same type round at ranges above 2,000 yards, possibly to the limit of the hitting ranges mentioned.

No change in the M18 is necessary to make it destructive to the enemy’s heavy tanks through hits on any part other than the front plate – Combat reports indicate its full capabilities in this respect demonstrated by actual combat.

The advisability of tying up completed, capable vehicles actually ready for combat assignment appears questionable. Further increase in the enemy’s frontal armor in new models might readily defeat the 90mm gun. New construction to effect a caliber increase should be carefully considered before a change is decided upon; also, the full possibilities of penetration of the frontal armor of the Panther and Tiger by the 76mm gun using still higher velocity projectiles, either half-weight or sabot, should be exhausted before the present M18 is radically modified.

However, in anticipation of exigencies as the war continues and of possible resumption of manufacture of the M18, which is a proven vehicle with no counterpart as a combination of fire-power and mobility, it is believed advisable that steps be taken now to explore from the design viewpoint the possibilities of replacing the 76mm gun on the M18 with the 90mm caliber, especially any improved versions of that caliber.

So, in other words, TD Branch didn’t think converting the M18s was a good idea at the time, unless the Germans came out with new vehicles they hadn’t encountered yet.

As a result of this submission, by the end of February 1945, Army Ground Forces sent a request to Army Service Forces a study to mount a 90mm gun onto M18 (interestingly, with a coaxial. .50 MG machinegun).

By June 1945, the lads at Aberdeen had, for the sake of the experiment, managed to put the M36 turret onto the M18’s hull. The turret floor had to be lifted 2” by cutting and shortening the supports; the slip ring had to suffer a similar modification. The raising of the hull floor seems to have affected the range of elevation, as the mounting allowed only 17 degrees as opposed to the 20 as we believe would be found on an M36. In order to get any of the driver’s hatches to open or close at all in all conditions, a couple of inches needed to be shaved off the small doors, the larger doors remained unable to be opened if the turret happened to be in certain positions. The converter cooler blower’s discharge air vent needed to be cut back a bit to prevent interference. The vehicle weighed 43,075 lbs without stowage, about 3,000 lbs more than a standard M18.

The first thing they did, after the obligatory photographs and measuring, was to drive the vehicle around for a bit. Aberdeen reported, “[T]he performance of the vehicle was not noticeably affected by this small increase in weight; however, due to the shift in the center of gravity, the rear of the vehicle rode lower than the front.”

Then it came time for live fire.

The testing was not over yet; however, it was time for the endurance tests. They scraped up a travel lock from an M26 to hold the gun in place and put it onto the rear of the vehicle, and given the “considerable” increase in ground pressure caused by the heavier turret, they decided to put on the 21” wide T82 tracks which had been, unfortunately, rather well used in earlier tests. This required new sprockets and idlers be mounted.

They got about 25 miles into the 1,000 mile test before the track fell apart. They reinstalled the original running gear, and continued on. Incidentally, in a later attempt to create a more reliable 21” track than T82, they developed the T86 and tested that on an M18 as well, see image below. That test, undertaken in early 1947, indicated that the wider tracks showed more rolling resistance and less hill-climbing ability than the standard T69 track, but the whole project was cancelled by Army Ground Forces in April 1947 before full testing was completed as there didn’t seem to be any point in expending the effort. 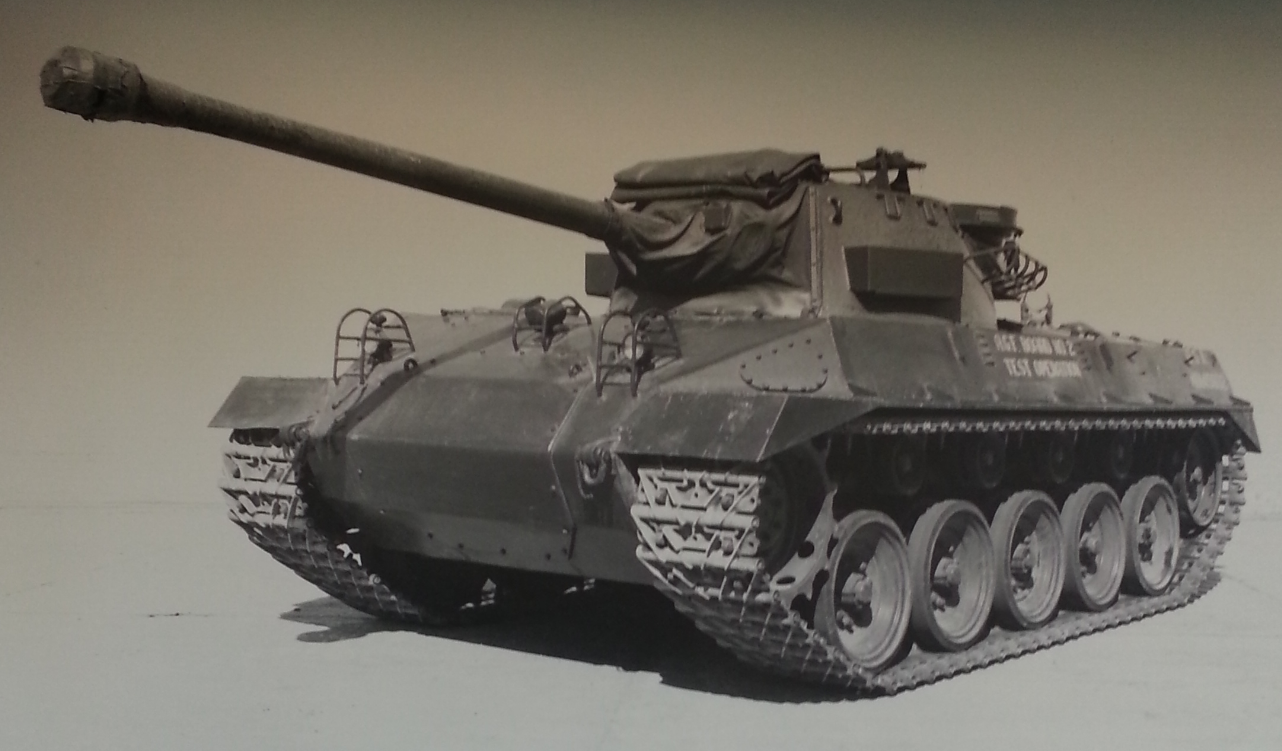 The vehicle passed the endurance test fairly handily, the only significant problems being that the volute springs kept being knocked off or damaged, presumably the heavier weight of the vehicle causing more significant impacts resulting from higher motion of the road wheel arms. Final damage tally in 1,000 miles was three springs, one thrown track, and one link somehow bent 90 degrees about 3" in from the end.

Once the vehicle was considered generally mechanically capable, it was to be sent off to Armored Board (not TD Board, curiously) for further tests. If it ever made it that far, I have not yet encountered the records. 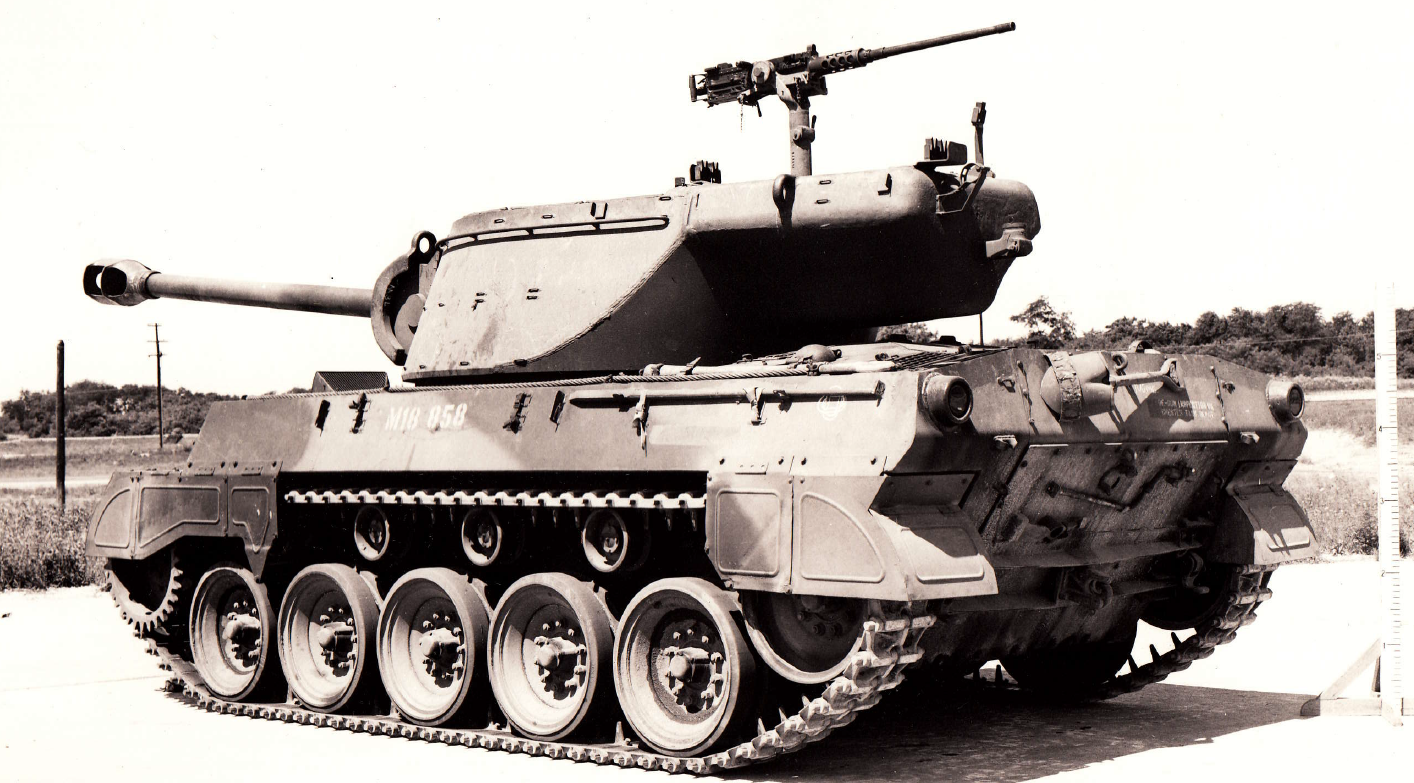 It was considered that in the event that the modified vehicle ever made it into production, or more likely, conversion in the field, the ammunition stowage would be provided for some 50 rounds. This would have involved the removal of the assistant driver and installation of ammunition racks. Overall, it was concluded that the conversion could be done in the field if required.

Of course, in the final analysis, none of this ever happened.

The ever-willing Bob shall to take you to the forum thread. Otherwise, track me down on Facebook and sometimes I even stream on Twitch.