I thought you might be interested in the minutes of a meeting that the Armored Board held on 17th May 1944 which I came across in the Archives. It’s not particularly long, but does shed some light on a vehicle which has come up from time to time. The 90mm Sherman. So, to the minutes. (Remember, meetings are defined as events where one takes minutes and wastes hours)

2. General Waldron [Requirements section, AGF] outlined the reason for the meeting – To discuss T25 and T26 tanks. Colonel Douglass [LTC, Armored Board) reported no major failures on our test tanks. The only real failure to date was the elevating mechanism on the Medium Heavy Tank, T26E1. [Chieftain’s note: Yes, it actually says “Medium Heavy Tank”]

3. Colonel Dean [Requirements section, AGF] stated that Colonel Colby [Office Chief of Ordnance, Detroit] and he had had a conference in Washington and that the requirements of the European Theater of Operations in connection with these two tanks were discussed. ETO demands seventy (70) rounds of major caliber ammunition, regardless of the caliber. Colonel Colby stated that seventy one (71) rounds of ammunition can be stowed in the T25 and T26 tanks. Twelve (12) rounds will be stowed in the turret. It was brought out that stowage items may have to be sacrificed or moved to other places to obtain seventy (70) rounds. It is believed that seventy (70) or seventy-one (71) rounds can be stowed if all other matters are subordinated. The turret will be crowded and access to the driver’s compartment will probably not be possible. ETO requires that the bow machine gun be retained. The front plate will be a weak spot but must be accepted. The bow machine gunner is wanted by the theater. Eighteen (18) rounds could be restowed in that place in a removable rack. 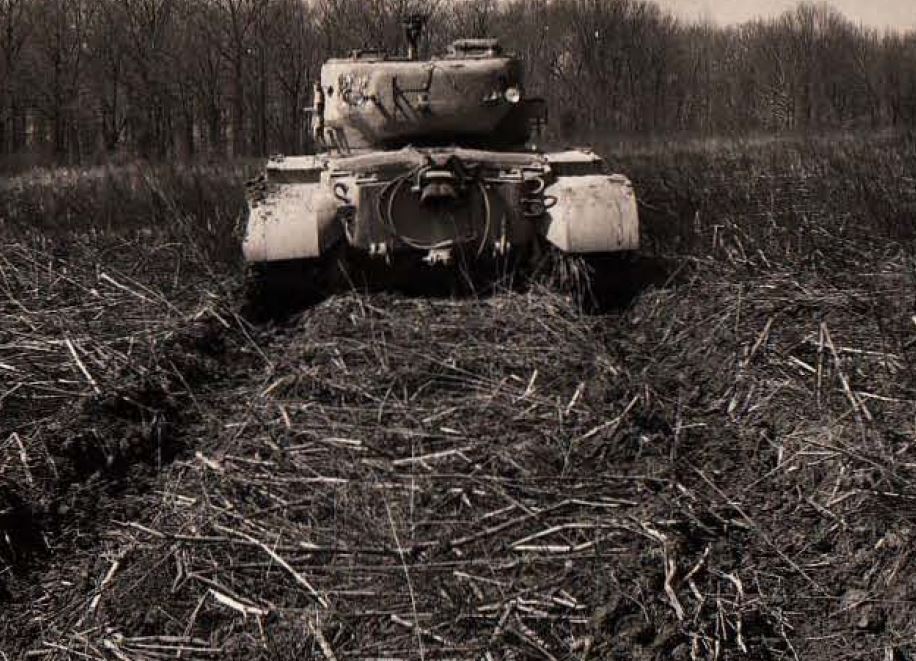 4. a. The ground pressure on the new tanks should be reduced, if possible. The application of the T26 suspension to the T25 tank was discussed. 3,000 pounds of weight would be added but the ground pressure would be reduced to 11psi. This tank suspension should require considerably less maintenance because of its overstrength. Office Chief of Ordnance – Detroit estimates the weight of the medium tank M4 with 90mm gun as 84,000 pounds, while the Board estimates 80,500. These estimates are very close together for separate calculation.

b. Cross-country mobility is of paramount importance. The Medium Tank, M4, with 90mm gun cannot meet the requirement for the mobility of the Medium Tank M4A3(75mm) or better. The T25 and T26 tanks meet this mobility requirement. Width is also an important consideration, but the Army Regulations and Engineer equipment are being changed to meet our weights and tank widths. 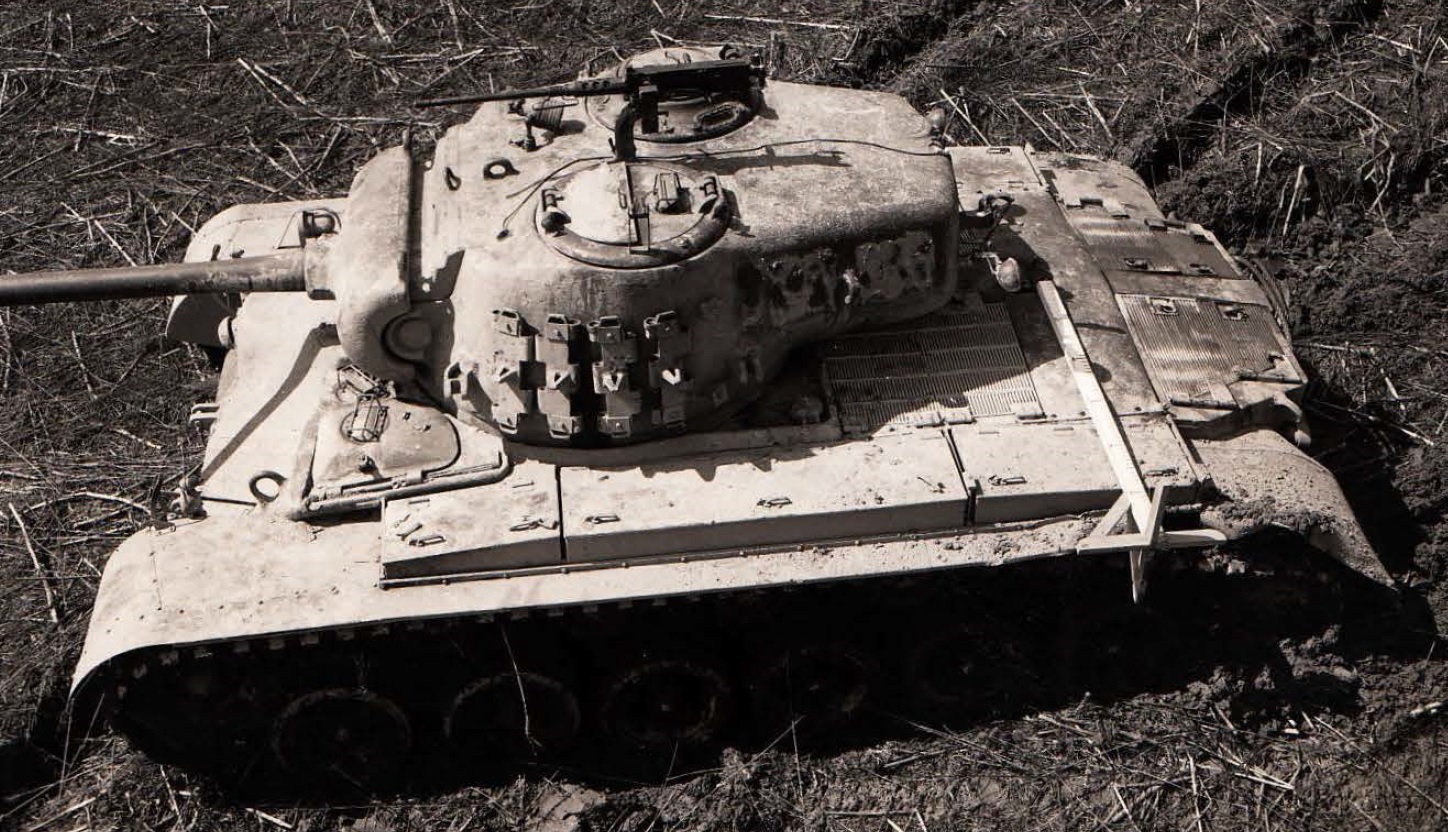 5. Office Chief of Ordnance – Detroit would not agree to the use of the Medium Tank, M4, to meet the 1945 requirements for 90mm gun tanks. Medium Tank, M4, with 90mm gun should not be used unless it is a better tank than the Medium Heavy Tank T26, with 90mm gun. While it might be possible to design and build a 90mm gun turret for the M4 tank, it will not be possible to get the 90mm guns before the T25 and T26 tanks are in production. Seventy-two (72) rounds of ammunition can be stowed in the Medium Tank M4 in the same manner as in Medium Tank T26. General Barnes stated that the production of 90mm guns is the bottleneck in the construction of these tanks.  The production of 90mm guns was completely stopped; it must be started again from the beginning. Orders must be placed now for any guns that are desired a year from now. Ordnance expects to produce one hundred twenty five (125) 90mm gun T26 tanks by January 1945. That production will build up to four hundred (400) per month during 1945. General Barnes stated that Fisher and Chrysler will be set up to produce T25 and T26 tanks. If a larger order of tanks is forthcoming at this time, it will be possible to produce tanks at a faster rate than four hundred (400) per month.

6. It is thought that the 105mm howitzer should be provided by present production to obtain the requirements of the European Theater of Operations. The Armored Board recommended the use of Medium Tank, M4, with 105mm Howitzer, as approved by Office Chief of Ordnance-Detroit, with sixty-six (66) rounds of ammunition. Twelve (12) more rounds can be added if desired, but will spoil the stowage arrangement. When a satisfactory turret for the 105mm howitzer is developed, production can be gradually shifted to the 105mm in the T25 tank.

7. Colonel Colby stated that tanks were being set aside at Detroit for restowage study; one is being made up at Fisher and one at Chevrolet. Stowage in the tank at Chevrolet should be complete within three weeks. Colonel Williams requested that the Armored Board be allowed to restow a tank here. General Waldron approved. Colonel Heath stated that we could quickly stow a tank without the finished clips and other final bric-abrac.

8. Colonel Machle stated that the 90mm gun as installed at present is a one-shot weapon. He wanted to know what was being done to eliminate the gunner’s obscuration problem. He inquired if any steps were being taken to adopt a muzzle brake or special ammunition. General Barnes replied that this is an A-1 project as far as Ordnance is concerned, and that a detailed test is being run at Aberdeen on the muzzle brake. An answer on the adoption of the muzzle brake is expected shortly. He stated that the indications are that a muzzle brake may affect accuracy. Colonel Williams [Armored Board]  stated that tests conducted by the Armored Board on the 76mm gun did not indicate a significant effect on the accuracy of the weapon. Colonel Machle stated that the present tank lacks space for proper ammunition stowage and wanted to know what could be done to increase the height of the tank. Colonel Colby stated that it would cost about one (1) ton per inch increase in height and that it would be very undesireable to increase either the weight or the height of either the T25 and T26.

9. General Barnes stated that the German Tiger Tank weighs sixty-two (62) tons compared to forty-three (43) tons for the T26. The effective armor is about the same. The 90mm is slightly better than the old 88mm gun. No information is available to show that the new 88mm gun is installed in tanks. Much of the information available on foreign guns is not reliable. The Ordnance Department is going to supply actual test data on foreign guns to the service boards.

10 Colonel Douglass inquired about the solution of the carburetion problem. Colonel Colby replied that Ford engineers were working on the problem, which was not yet solved.

Firstly, and most obviously, the 90mm Sherman. It has been stated before that production of the M4 with the T26 turret couldn’t really be put into place any faster than T26 itself, and now I have a record of who actually said it and why. Plus, it seems, that the Armored Board weren’t all that enthralled by it anyway, given the reductions in mobility that the tank would incur. 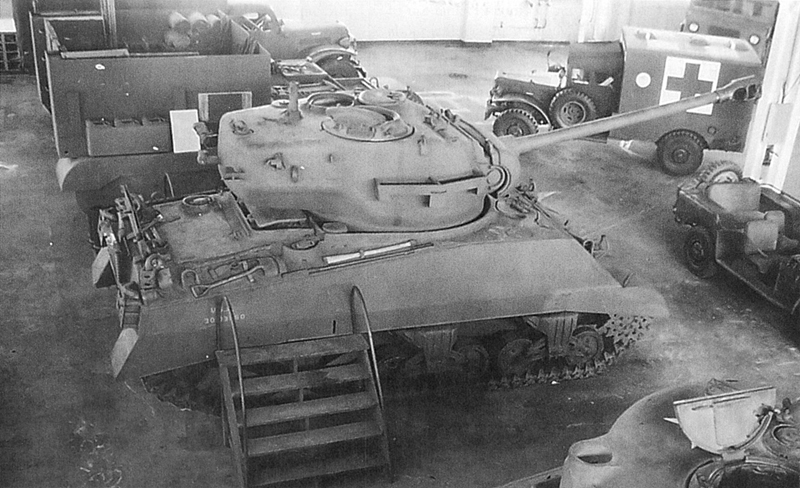 As an aside, the picture above is frequently stated as an M4A3, though the engine deck indicates it’s a radial-engined M4.

The other point which strikes to mind is just how much emphasis is placed on ammunition capacity. In other readings, it is frequently commented by both the development and using arms that they wanted the smallest possible gun that they could fit onto a vehicle which would do the job. Penetration and accuracy was to be obtained by velocity, not caliber. Not only would this make a lighter gun, but, more importantly, more rounds could be fired. It was to the point that it seems that capacity was so important that there was serious consideration to making the tank physically bigger just to take the ammo comfortably. I’m not sure if this reflected a belief that supply would be difficult due to capacity of the supply lines to reach the front, or a belief that the tanks would be moving so quickly that they just didn’t want to stop to rearm until they had to.

As for the bow machinegun, one reason I've seen listed for why it was desired to be maintained was that it was felt that itr was the only weapon on the tank capable of being effectively used when on the move. This brings us back to the previous article on Sherman's gun stabilisatrion, and the difference between its effectiveness and its perceived effectiveness.

Anyway, I hope this has been of some interest to you. Bob returns to take you to the forum thread.

As ever, my Facebook page remains here, my Youtube channel here, and Twitch stream (Every Tuesday, and (very) occasional evenings) is here.