In September, 1950, G.L. Turner, Research Engineer of the Clark Equipment Company of Buchanan, MI, proposed in a letter to the Armored Forces liaison in Detroit a design of a new tank, they called their “Hydraulic Tank”.

“Enclosed herewith you will find a brief description of the unit as we visualized it, as well as the tentative lay-outs of the unit.

You will note that this is pictured as a one man unit, we attempted to design a two-man unit as you suggested but encountered many complications with which we were not involved when designing a one man unit. We feel that the simplicity of the driver control, steering wheel which steers through a valva and a simple accelerator would give the operator adequate time for sighting and firing.

Our conception of a 105 recoilless rifle is shown on the unit, however, it probably is not correct as far as the exact measurements of the automatic loading mechanism, etc. are concerned. Tests recently conducted verify [sic] our feeling that the hydraulic drive would be ideal as a motive power and would precisely traverse the entire unit.”

The narrative and description was more or less as follows:

Generally, it is believed that a small, flexible tank which can carry a heavy recoilless gun would be an advantageous vehicle.

Many of this type of vehicle could be built, shipped and supplied for use at distant points and could carry much fire power in from the sea or air. This tank would onley weight 6-7000lbs and could protect itself with its fire power, speed, flexibility and the greater number which could be put into the field.

It could be used as a fighting vehicle in motion or as a static field piece. A 105mm recoilless rifle is shown, but flame throwers, etc., could be used on alternate tanks.

The above points have been considered and it is felt that such a unit would be of merit.

Many of these thoughts are not new; however, the drive makes possible this grouping of characteristics.

Doubtlessly the Field Forces could add much to the track, suspension, weapon, tactical use etc. Perhaps a combination of thoughts could result in a very successful tank.

The proposed tracks are one piece rubber with cables molded into them. The connector on each track will be one pin locked in place. Each end of the track will have one side of a “piano hinge” which in turn is connected to the cables and molded into the rubber.

A raised rib in the center of the track will fit into a groove in the driver, front idler, and the boggies [sic]. The boggies [again, sic], driver and idler will be the full width of the tracks (11”). If a track were lost, the width and diameter of the driver, idler and boggies [sigh] would support the unit under some conditions.

The drivers will be fixed to the hull, no spring suspension. The front idlers will be sprung suspended with the track take-up spring on the suspended arms. Should the fixed drivers be considered likely to give too rough a ride, rubber could be interposed between the driver hubs and the show, upon which the track might ride.

The track contact area will be approximately 12sq ft. This high floatation is used to reduce the power required to pivot the tank by reversing a track. A practically noiseless drive should result.

No drive sprocket will be used. The wrap of the track around the driver should be sufficient.

The drawings show a 105mm recoilless gun mounted on the tank as the major weapon and a .30 cal. machine gun or an anti-personal [sic, yet again] weapon.

The 105mm gun is so mounted on a hydraulic ram that it can be raised and lowered by a hand displacement cylinder connected to the ram. When the gun is in the traveling position, it is aligned with the vehicle so that the direction of travel is in the direction of firing. A link connected to the magazine would adjust the elevation when the ram is raised or lowered. When the link is released, the gun can be raised on the ram high enough to give 360° rotation by using the traversing mechanism and a separate elevation mechanism.

The reason for fixing the gun in the traveling position is that the complete tank can be accurately traversed similarly to a turret. This will be covered under drive.

Angles of elevation should be approximately 25° down and 45° raised.

The automatic loading device is shown and an armored outside magazine contains approximately 20 rounds of 105mm.

Sights would be in line with the driver’s normal line of vision. The free hand of the driver adjusts the elevation.

The .30 cal. machine gun would be belt-fed from a box. The driver will be able to fire the machine gun through a 180° traverse from driving position. Reload will be possible from the drivers seat.

The escape hatch would be spring loaded so when tripped, would give driver immediate exit. The Engine compartment would be easily opened and make the engine easily accessible for repair.

Adequate vision would be given the operator.

The armor is for anti-personal [Sic. Well, he’s an engineer, not an English teacher] protection basically.

The weight of the tank is estimated at approximately 6,000lbs, therefore approximately 60hp will be required to drive the vehicle. An air-cooled engine is proposed. The engine in turn will drive a vane type variable displacement hydraulic pump which will drive through valving two vane type hydraulic motors. One motor will drive each track through a gear reduction into the driver. The pump will deliver a maximum volume of 80GPM. The variable pump will automatically reduce this volume and give a torque multiplication of 3 to 1 at a dead head pressure of 2,000psi. This type of drive is being used on one of our vehicles which will be in production in December this year.

No intercooler other than a 25 gallon oil sump is required.

A dividing valve will regulate the relative flow between each drive motor controlling the steering and also give a forward direction to one track and a rearward direction to the other, thus traversing the vehicle.

Here’s what it looked like. Something to inspire fear into the hearts of the enemy, no doubt. 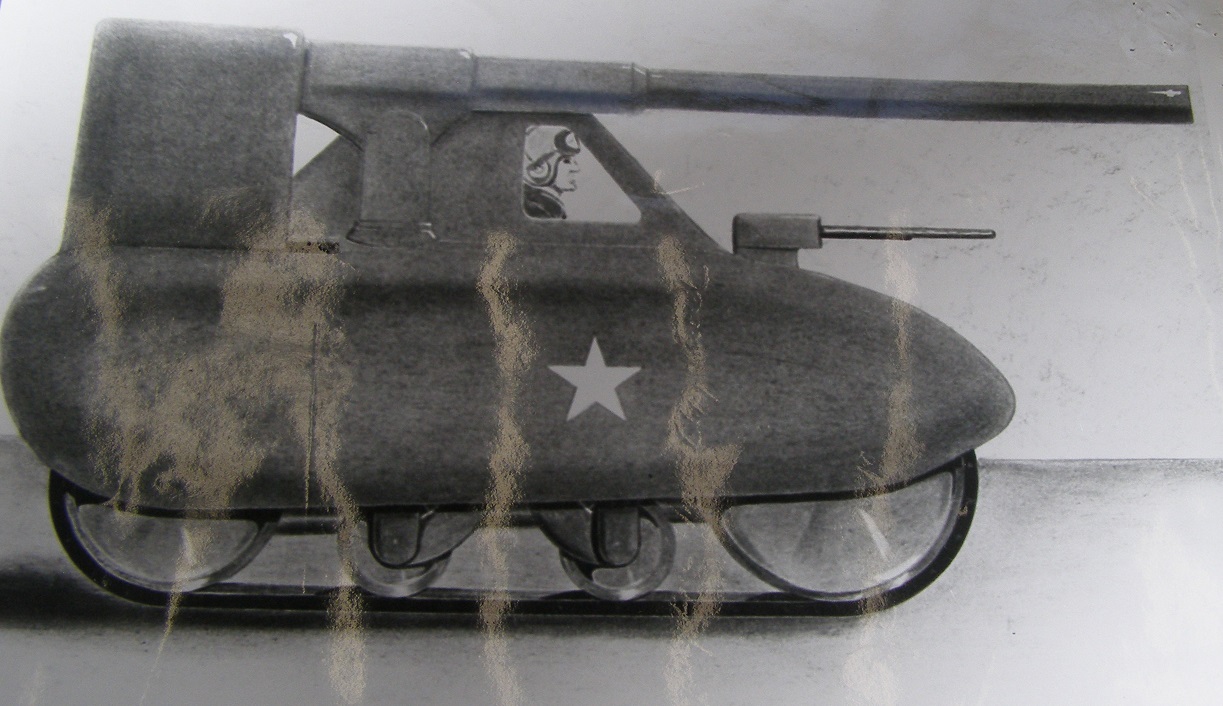 Detroit Arsenal then forwarded on the recommendation to the chiefs of Armor and Infantry boards. At the time there was a proposed requirement for an “Infantry Fighter”, which, from inference, appears to be an early concept of Infantry Fighting Vehicle. The file contains only the response from Fort Knox, as below:

It is believed that there is no tactical requirement for a vehicle with the outlined characteristics as a replacement for existing tanks in any armored units.

1) The concept of armored warfare, as generally accepted throughout the world, envisages an arm of mobility, armor-protected firepower and shock action which is to be used in mass. While the midget hydraulic tank may exceed the mobility of the conventional tank, it is definitely lacking in armor protection for its firepower, and its shock action appears to be completely lacking. The effect of massed armor is psychological, as well as physical, and the psychological effect of this midget tank on the enemy appears to be negligible. Further, the low velocity weapon of this vehicle cannot compare with the accuracy and one-shot killing probability of the high velocity gun of the tank.

2) Since the main armament is fixed in a traveling position and the driver has restricted vision, the field of observation and fire of the vehicle is dangerously limited. In addition, if it is a one-man unit, the driver is of necessity pre-occupied with driving the vehicle and cannot seek out the enemy either visually or with reconnaissance by fire. As compared to the conventional tank, the limit of visibility from a height of less than five feet is greatly reduced. This is vitally important in engaging surprise targets which may appear on the battlefield.

3) As an offensive weapon, employed in reinforced units, this tank does not meet the accepted standards of seeking the enemy to destroy him. It appears that this vehicle is conceived on the idea that the position of the enemy tank is known.

4) It is impractical for one, or even two, men to be charged with the responsibility for first echelon maintenance of such a vehicle to include its power plant, weapons and communications.

5) Psychologically, it is a known fact that a single individual is not nearly as courageous as a team of two or more soldiers.

This vehicle may have possibilities as the replacement or supplement for the present, man-carried, close support infantry weapons such as the recoilless rifles.

Thus ended the proposal by Clark. They did actually end up with the occasional government contract, the M9 Armored Combat Earthmover, for example, was one of their products, so I guess they did return to reality in their area of competence. 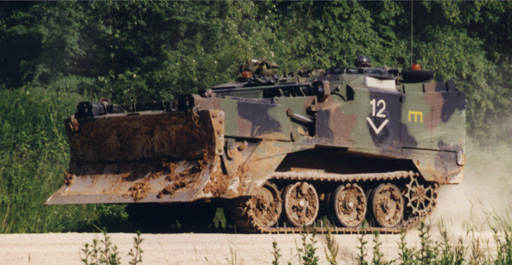 Pretty much patently the idea was complete foolishness, though credit to them for thinking outside the box. The idea of aiming the gun by movement of the entire vehicle (although optional, by the description) certainly has S-tank shades, but even at that, the idea was implemented in the Char B1, so it's not entirely novel or futuristic.

The 105mm is not a typographical error. The 106mm recoilless rifle is in fact a 105mm, they just changed the name to avoid confusion with the standard 105mm rifles which were being played around with at the time.

With one click only, Bob will take you to the forum thread.