The Chieftain's Hatch: The Unmanned Patton

An M48A1 arrived in Aberdeen Proving Grounds at the end of September 1956 together with a bunch of electronic equipment. The goal was to see if it was possible to operate a tank by remote control. There were two main proposed uses for this. The first was to trundle around in a nuclear contaminated environment to take readings. The other was to do a form of recon-by-blowing-up. The opposition would shoot at the M48, thus reveal itself, without putting any crewmen in danger. The external give-away that this was an unusual tank was the extra antenna on the turret roof. 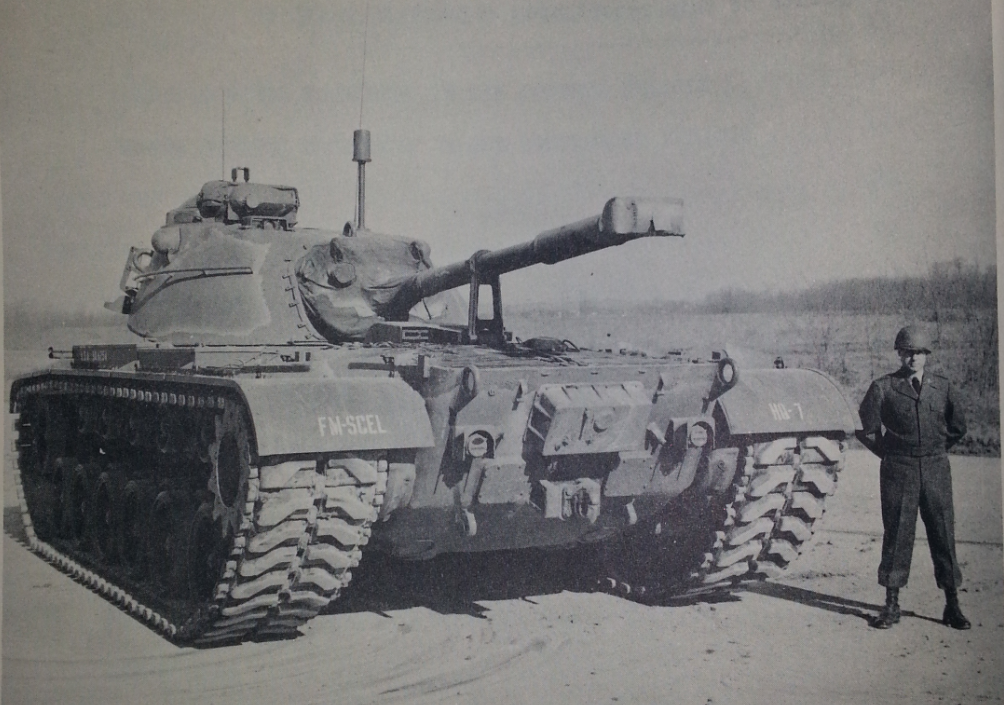 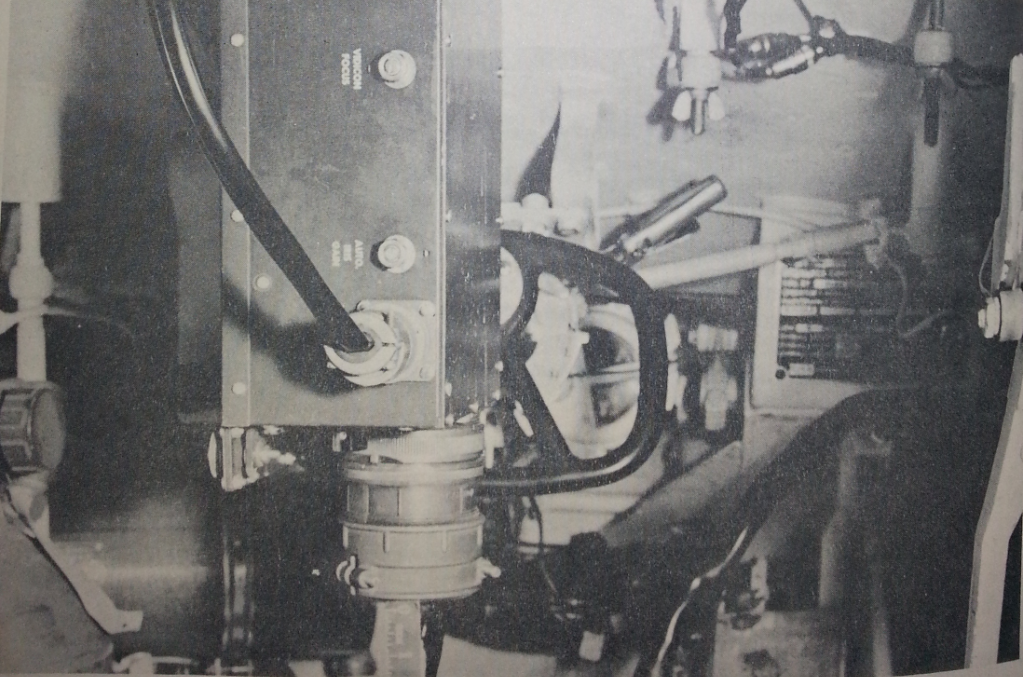 The first was a wide-angle camera, which looked through the driver’s port, and had a 90-degree field of vision.

The second was the gun camera, fitted with a zoom lens. The lens is listed as an f1:4.5, for use at ranges from 280 to 1,000 yards. There was also a motor-driven iris. The camera observed through the gunner’s periscope, as per a normal tank, but the reticle was replaced with one as part of the camera system. 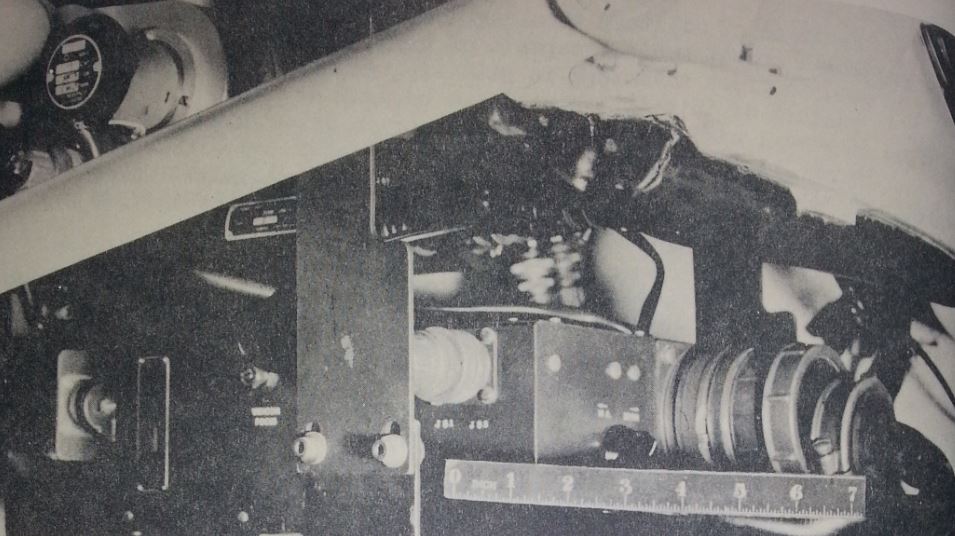 There was also an external lens which was used for boresighting, adjusting this whole system to make sure the tank was aiming where it was supposed to was a three-man job and fairly complicated.

The loader’s side saw the installation of the master control unit, transmitter, and power amp. 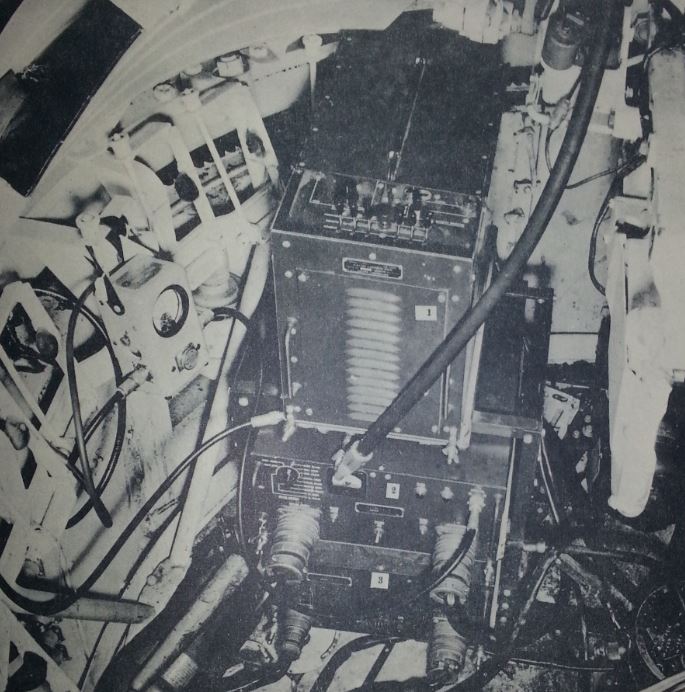 Finally, beside the gunner’s position was mounted the ballistic computer. It could calculate for three types of 90mm ammunition, and the coaxial machinegun. It took range inputs from the gun camera system, and then applied super-elevation to the gun.

At the other end of the system was found an M109 shop van. On the outside, the directional Yagi antenna. 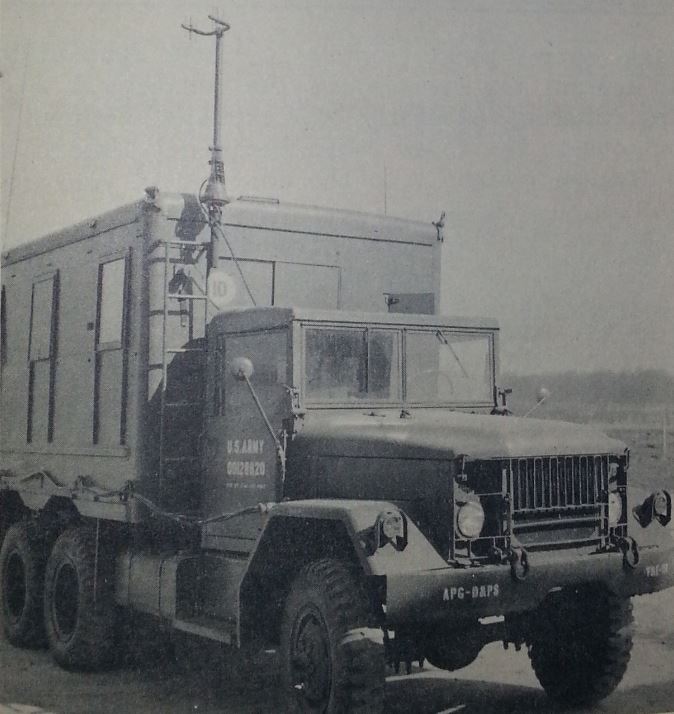 Inside the van would be found the monitors and controls. 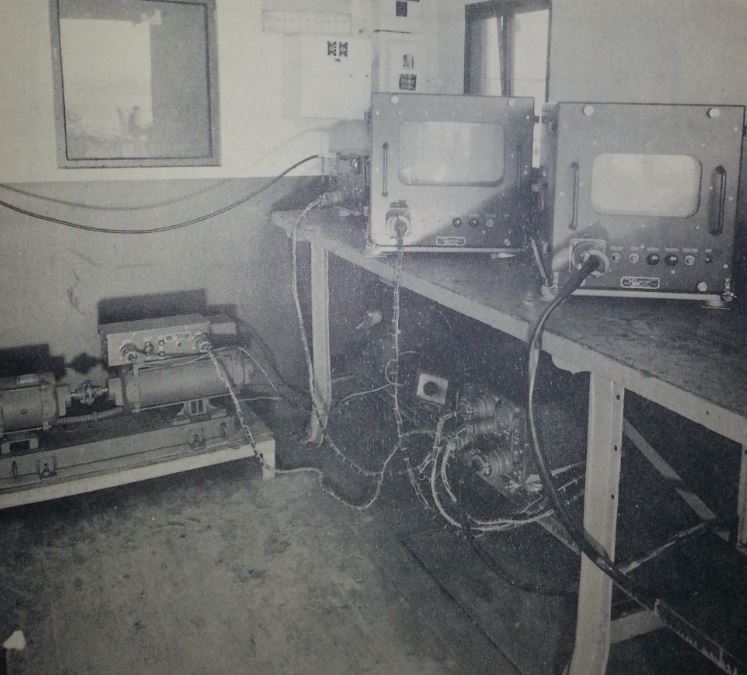 The first control was for the antenna itself, to make sure the signal was still being beamed to and from the tank. The antenna’s signal arc was only about 30 degrees.

The two ‘tank crewmen’ had simple controls. A box for the driver, a control box for the TC/Gunner, and an actual control handle. Using this, off they went for 52 miles with the most expensive (And arguably destructive) radio-controlled toy then conceived.

The first order of business was to figure out just how far away they could be. The command signal proved to be about 2,800 yards. There is nothing in the test report to indicate what happened to the tank when it went out of radio range. However, since the television signal apparently was good for up to two miles, they could at least get some potential entertainment. Wooded terrain about halved this, and when adding in ice or snow, the effective utility range was 1,000 yards. This wasn’t considered too much of a problem, however: The report noted that “Location of the controlled vehicle cannot be adequately determined once it leaves the direct vision of the operator, unless the operator is able to detect some object or landmark on the television screen with which he is familiar”, so they likely didn’t want to be too far away from it anyway.

“While the vehicle was operating over well-defined roads, the picture on the display units was very clear and there were no difficulties in driving at speeds up to 15mph. However, cross-country operation was difficult due to lack of depth perception in the picture presented on the display units [Today’s drivers operating on night vision may be familiar with this problem – Chieftain]. The operator could drive the vehicle into a hole or ditch large enough to render the tank inoperative before realizing the presence of such a hazard. Further, a tank equipped with medium-quality television operating at a speed of 25mph could strike a wall three feet high within five seconds after it became distinguishable on the television screen. [I wonder what they accidentally destroyed to result in that conclusion? – Chieftain] Vehicle speeds, therefore, had to be limited.”

I like to play with radio controlled toys (as you can tell if you watch my streams), and routinely after I screw up I have to walk over to the crashed car, helicopter, etc and set it upright again. I can only imagine the tank recovery crews were taking bets as to how long it would be before the operators managed to drive their toy into a ‘hole or ditch large enough’ and need to be reset.

But that’s just the driving. How about the fun part? What’s the point of a radio-controlled tank if you can’t shoot things with it?

Fortunately, in the interests of science, the operators fired about a hundred rounds by remote control. As a technology demonstrator, there was no loading system, they still had to be loaded manually.

This is what the gunner saw. 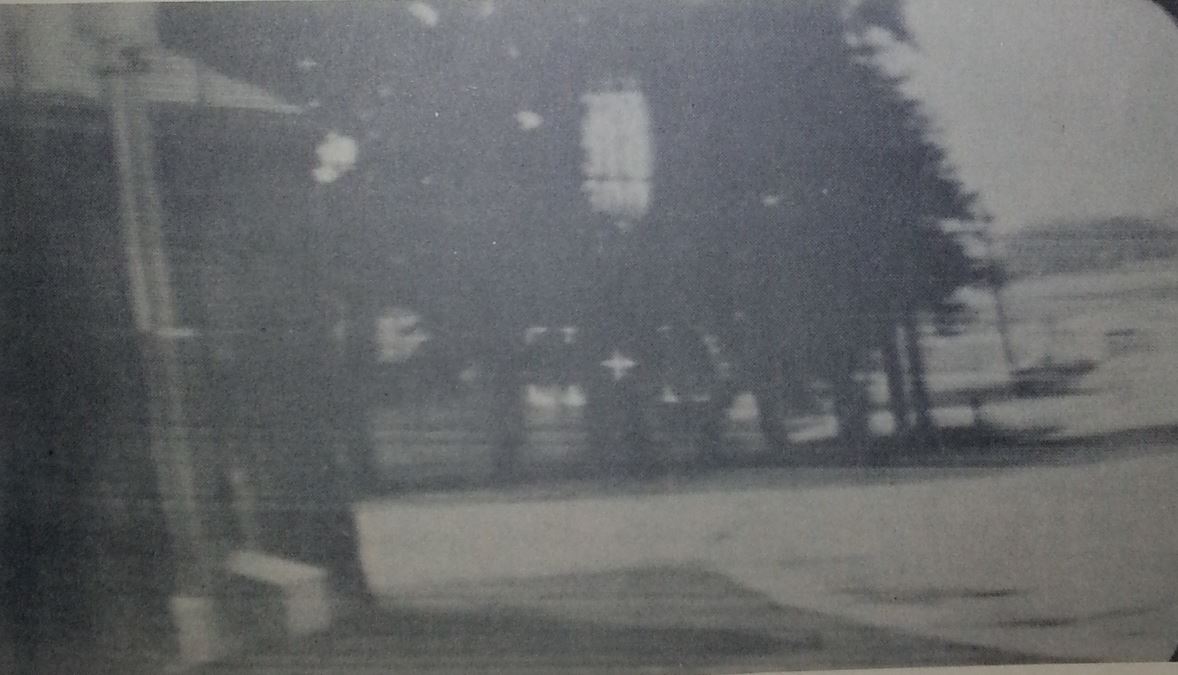 The first problem was seeing the target to begin with. Especially if the gunner traversed from a majority light to a majority dark view, or vice versa, the settings on the camera had to be adjusted to compensate. Then the gunner had to adjust himself to the new picture. This was a significant reason why laying on a target took, on average, twice as long for the radio controlled tank as it would for a normally crewed tank. (22-30 seconds, when CONARC’s requirement for a first round was 15 seconds). The second problem was that there was often a delay between controller input and actual tank movement, or cessation of movement. As a result, a lot of fine tuning proved to be required.

The second requirement was then to range to the target. A clever little system was devised, and it worked on the following basis: 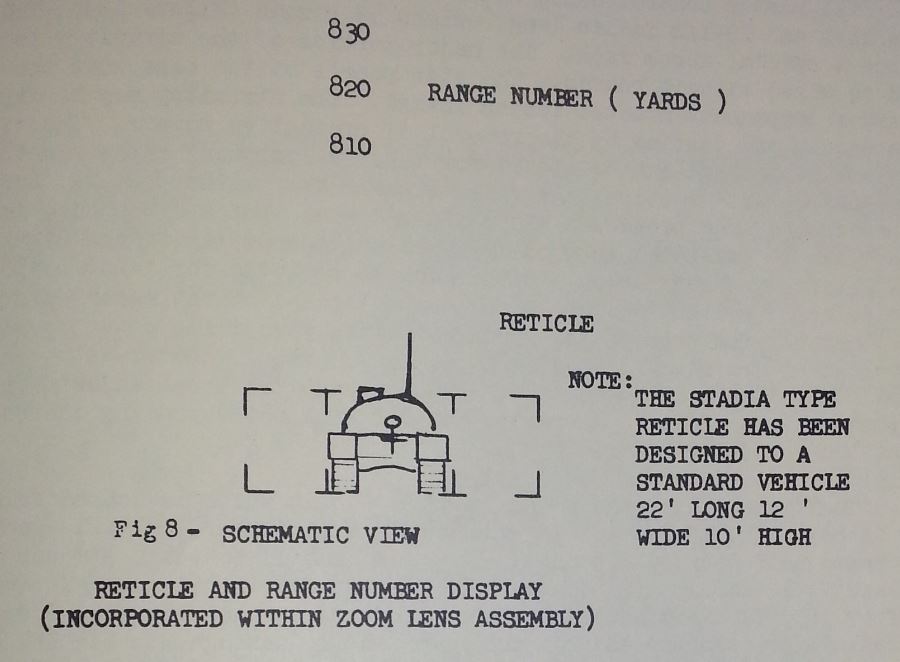 All the gunner had to do was make the rangefinder square go bigger or smaller to adjust to the size of the target. Testing showed that the system was accurate to about 3%, so at the 870 yard target, a 25-yard difference. Pretty good. Of course, it’s also dependent upon the reticle being correctly sized for the type of tank you’re going up against, with mental arithmetic required (as well as dimensional knowledge) if going up against anything else. And it doesn’t do anything for non-tanks, unless you imagine one next to the target for scale. Still, I’m not knocking it: Such a system is still in use today in for the choke reticle on Bradleys and Abrams. 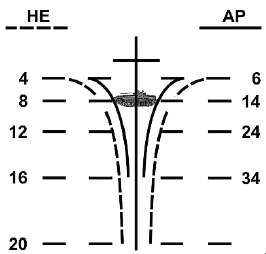 Fighter pilots may be familiar with the similar funnel sight, though the size of the funnel on those is adjustable depending on what you think you’re going up against.

That would then scroll the range numbers at the top of the screen up or down, for the TC’s knowledge. The range itself was automatically applied through the aforementioned ballistic computer.

Tracking moving targets proved difficult for the two also-aforementioned reasons: The fact that the screen’s contrast would need to be changed as the target moved onto different backgrounds, and also the response delay.  If the target did anything much over 5mph, the gunner could track for about 70-80% of the time. CONARC standard was 100%.

Finally, the actual dispersion from the whole system was about double that of a standard tank. Plus, just to have an icing on the cake, the obscuration was such that tracer was invisisible on all but the five lower-velocity HE rounds fired.

If this wasn’t all bad enough, there was also the small detail that trained electronics technicians were required to keep the whole thing up and running. Which, given the maturity of the technology of the time, was not easy. Seventeen failures were recorded over the seven or so months of testing, almost every one required sending a technician out from Fort Monmouth or Detroit to fix. A letter dated 6 March 1957 noted: “Fifteen thousand dollars have been allotted this project approximately seven thousand dollars have been expended in attempts to keep the equipment operating with virtually no testing accomplished. In order to conserve test funds, it is recommended that testing of this vehicle be suspended until the equipment is sufficiently developed to allow reasonable completion of the test schedule. An estimated $5,000 additional will be required to complete the original test program when reliability of the equipment is attained”

For the curious, seven thousand 1957 dollars equates to a little under $60,000 today, adjusted for inflation. I suspect such a test today might cost a little more.

In any case, the final recommendation was

“If a requirement for a tank remotely controlled through television continues to exist, it is recommended that:

1) Depth perception be improved in the picture presentation

3) Reliability of the entire system be improved.” 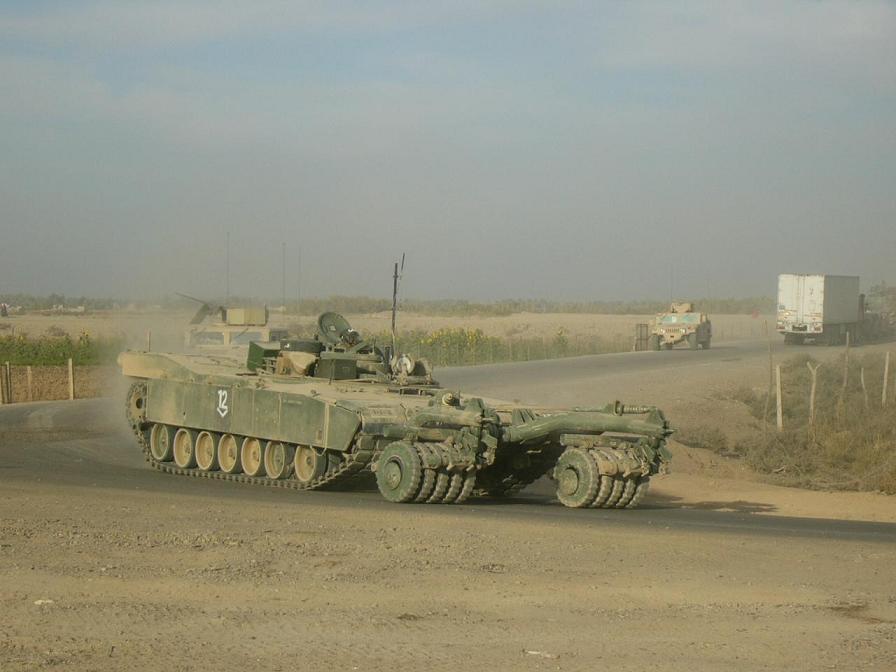 Unmanned tanks have existed to a limited degree. This Panther II I came across in Iraq, for example (One of six) can be operated remotely as it breaches minefields.

And, of course, there are systems such as Black Knight. I’m not a huge fan of removing the crew quite yet, I don’t think technology is quite there. So for 1956, making a moving and shooting tank was quite the exercise in forward thinking.

For forum discussion, in an excellent example of automation which works as intended, click Bob.