T29 and its variants has been a subject on the forum recently, (And other websites), and I may have had something to do with that. Since it is a topic of conversation, however, a quick look at what happened to them. Sadly, nothing dramatic. Long and boring wall of text follows!

Toward the latter part of World War II, it became apparent that armored vehicles of greater fire power were required for attacks on fortified positions and on heavily armored and armed enemy combat vehicles. Consequently, in 1944 the development of a heavy tank was authorized, to weigh approximately 60 tons. The armor basis was to approach nine inches at the front and to be the maximum possible under the weight limitations. Power was to be supplied from a 750-horsepower Code G engine driving through a cross-drive transmission, then under development incorporating new transmission and steering principles. Two turrets were to be developed for this basic chassis. One to incorporate a 105 mm gun and the other to incorporate a 155 mm gun with suitable rammer for the separate loading ammunition. The designations Heavy Tank T29 and Heavy Tank T30 were assigned to the 105 mm and 155 mm versions respectively. Later authorization was granted to construct two pilot models of Heavy Tank T34 to be identical with the T30 except that the 120 mm gun was to be used as basic armament

By the time the first T29 vehicle was received at Aberdeen Proving Ground in October 1947,  the requirements for heavily armored vehicles had shifted considerably and there was no demand by the Army Field Forces for the T29 or T30 vehicles as such. Consequently, the emphasis in testing was placed on engineering and endurance operation in order to further the development of the power package components. Two other T29 vehicles were received in April and May 1948 for additional endurance testing as well as engineering tests. There was no tactical testing of its combat capabilities.

The first Heavy Tank T30 was received at Aberdeen Proving Ground in April 1948 primarily for engineering tests in relation to the power paakage components: An AV1790-3, 12 cylinder, 810 horsepower air-cooled engine and CD 850-1 cross-drive transmission. A second vehicle, received in July 1948 was to be used primarily for endurance testing. T30 #4 ended up being sent to Fort Churchill, Canada, Jan 49 for cold-weather testing, though the results of this test were not available to me. Similarly T30 #6 was sent to Yuma, AZ in July 48 for cooling tests.

"This unit combines the functions of transmission, steering unit, ands vehicle braking. As a transmission, it incorporates two hydraulically selected mechanical gear ranges driving through a single phase hydraulic torque converter of conventional design. Actually, a portion of the engine power is transmitted through a mechanical patch by-passing the torque converter. This mechanical power, in addition to the hydraulic power, is applied equally to both output shafts except that in steering, all of the mechanical power is applied to one side to provide the speed difference between tracks. This steering is accomplished through a hydraulically actuated controlled differential. Vehicle braking is accomplished by built-in disk brakes actuated mechanically with a foot pedal in the driver’s compartment. Steering and shifting are accomplished by a manual dual-control unit installed in the driver’s compartment and controlled mechanically to the transmission.

A later model of this transmission, designated CD 850-2, incorporated a polyphase type torque converter in place of the single phase unit in the earlier model. This type of torque converter achieves higher operating efficiencies at high speeds by operating as a fluid coupling after the point of 1:1 torque multiplication is reached." 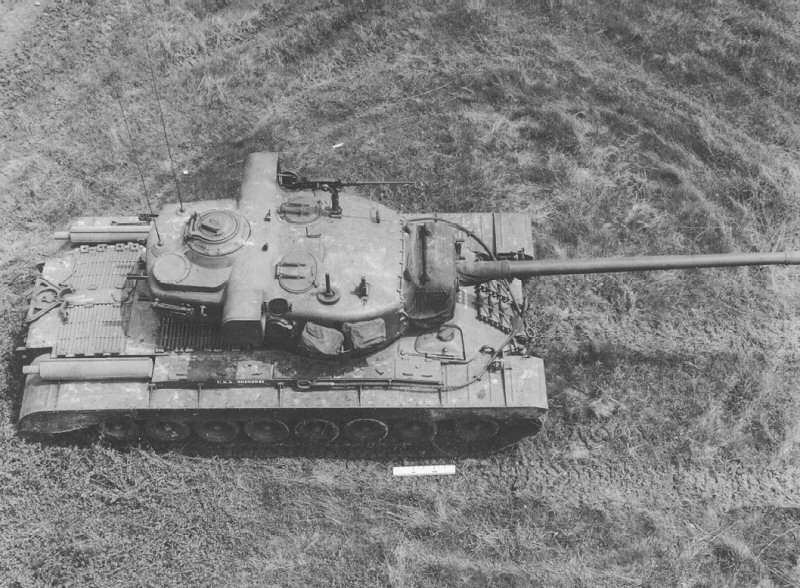 The only firing tests conducted on T29 were done on the T29E3 as part of the testing process for “Mount, Turret and Fighting Compartment with Integrated Fire Control System for Heavy Tank T29 and Medium Tank M26”, which I’m sure I’ll get back to at some point. T30 firing tests were primarily proof tests for the mount, and to test the power rammer.

The objective of the tests, per the report, was "to determine the reliability, durability and performance characteristics of heavy tanks T29 and T30 from an engineering standpoint, with particular emphasis on their power package components (Engine, transmission, and associated accessories) which were new development items."

"Three heavy tanks T29 and two Heavy Tanks T30 were operated for a total of approximately 7,500 miles, an average of 2,000 miles on each of the three endurance test vehicles on various test courses (One T29 and one T30 was used for engineering tests). A large number of individual failures were encountered, and many were corrected during the progress of the test. Of the remaining weaknesses, most have been or are currently being corrected by continuing development of the components for use in other vehicles. Complete engineering tests were conducted, including both performance and cooling investigations, and power checks were run on several individual engines. A number of points were raised in regard to the performance of the engine-transmission combination which remain unanswered."

Over 500 pages of reports, charts and other information were produced. I can’t understand some 490 of them.  There are pages of lists of breakages from engine oil leaks through breakages of suspension arms. Each one painstakingly documented, it must have been a thankless job. Instead of going through them.I just post up the summary:

Heavy Tanks T29 and T30 as tested incorporate many correctable deficiencies and were unsuitable for service.

The new power components in both vehicles show considerable promise in both reliability and performance, but must be developed further before becoming entirely satisfactory."

As an aside, one of the tests that the vehicles were used for was the mounting of rear-view mirrors on combat vehicles. “In general, it was found that the use of such vehicles is practical and would increase driver efficiency and safety, particularly when operating in restricted areas or commercial roadways.”. However, one cannot help but notice the absence of rear view mirrors on subsequent vehicles.

This was one of the first vehicles the US tested which used the ‘power package’ concept, of all the power plant elements assembled as one removable unit.

Advantages listed in the report:

1)       Allows operation of the complete power unit on the floor for checking before assembly in the vehicle. (What we know now as a ‘ground hop’)

2)       When a major power plant failure occurs, a unit replacement of the entire power package may be made quickly.

“Because of the compactness of the unit, very few repair operations can be accomplished in the vehicle. Thus, even comparatively minor repairs may require removal of the entire power package. A complete exchange of packs could be done by four men in 6-8 hours." The report notes “this time should and could be reduced to one hour,” and although eventually packs could get to this level of efficiency, it is instructive to see how far the designers had to progress.

What proved most interesting was that in general, the T29 with the 770hp engine proved to have better performance than the 810hp T30. In an example of why one cannot simply just drop a new engine into a tank and expect an improvement:

"One of the most important [reasons for the disparity] being the greater torque and horsepower of the GAC engine at engine speeds up to approximately 2200 rμn as compared with the AV 1790-3 engine. The GAC torque curve peaks at approximately 1800 rpm whereas the AV 1790-3 torque curve reaches a maximum at approximately 2200 rpm. Since the torque of the AV 1790-3 is greater than that of the GAC above 2200 rpm the AV 1790-3 develops greater horsepower at maximum speed. It is noteworthy that the engine speeds obtained during the performance tests were, for the most part~ near or below 2200 rpm. The engine speeds attained in wide open throttle operation are controlled by the load imposed on the engine through the transmission. Inasmuch as the CD 850-1 transmission incorporates a torque converter, the design of which must be matched closely with the performance of the engine used with it, it is apparent that the low maximum engine speeds attained under full load and power are a result of incorrect matching of the converter with the engine. This is probably true to a large extent with both the GAC engine (T29 vehicle) and the AV 1790-3 engine (T30 vehicle) although the vehicle characteristics obtained with the GAC engine are superior"

While the vehicles were undergoing testing, the Army also used them for other purposes which may have required the use of a large vehicle, such as this 80-ton flatcar. The last line of the caption amuses me, for some reason. 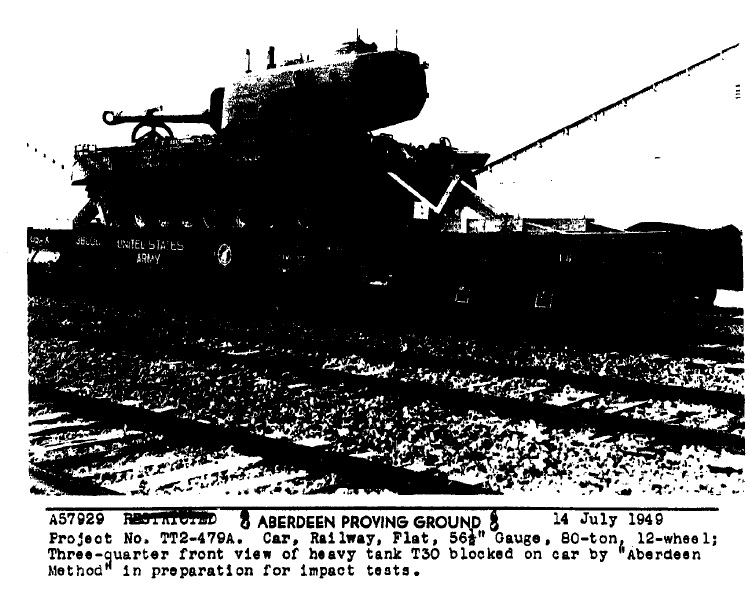 It’s on occasions like this which some of the lesser-thought-of features come to the fore. The vehicle test report points out that “it was discovered that some of the external accessories, headlight brackets in particular, interfered with the efficient blocking of the vehicle on the railway car. This indicates that in the early design stages, thought should be given to the placement of accessories relative to possible blocking  methods which will be used on the vehicle.

Eventually, of course, the vehicles were scattered to the winds, but there is a nice collection of T29, T29E3, T34 and T30 now side-by-side in Fort Benning.

To help you comment on the forum, I bring back my beautiful assistant, Bob!