Warning! The following is based purely on personal experience and speculation, and should not be considered a researched historical paper!

A couple of weeks ago, I had the pleasure of interviewing a WWII tank crewman for a Wargaming project; the first of the results just got released yesterday (The "War Has No Nation video). But one of the responses to a question I posed to him led me to thinking. As you could imagine, we got to the topic of 'meeting enemy tanks.' Understandably, he said that he was always concerned about meeting up with a Panzer IV or Panther because they had long 7.5cm guns that could destroy his Sherman. What I found interesting, however, was that he didn't seem to differentiate between the two vehicles in terms of how difficult they were to kill. What was important to him was whether or not they could kill him. And the reason he said he loved the Sherman was that it kept him safe from all the various nasties flying around in battle, namely bullets and artillery fragments. Nothing about the reliability, the speed or firepower -- just that he saw a lot of folks outside his tank killed by things from which he was protected.

And after a bit of a think (yes, I do that on rare occasions), I realized I had a similar conclusion. When I was roaming around in Iraq, not once did I concern myself with how easy or difficult something may have been to kill; it was more a matter of "If I keep my head out of the hatch, will I get killed?" I had an issue since I had watched Patton: there's a scene in the movie where Patton is telling Bradley about imagining a bullet going right to his nose. So as I rode around, I kept imagining an AK round heading right for the bridge of my nose as I was at 'eyball defilade' (high enough that my eyes were outside the hatch). 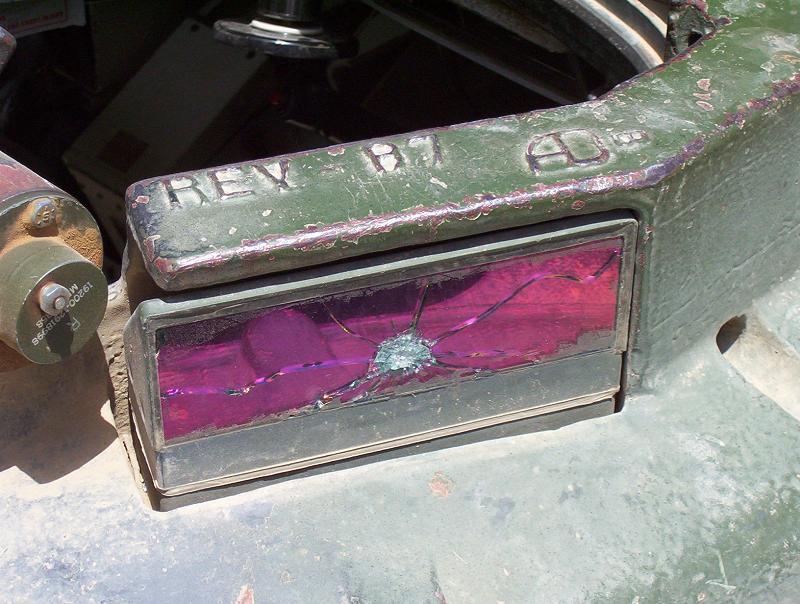 I'm in a $2.6 million tank, one of the most lethal, best-protected killing machines on the planet. But had the opposition aimed about three inches higher, I'd have been ended by a 25-cent bullet. Death is no respecter of what the on-paper specifications say.

But the bottom line, I think, is that one is usually far more concerned about one's own survival than anyone else's, especially if that 'anyone else' is someone you don't know a thing about.

The other impression I got from Tom (the veteran in question) was that when the shooting started, he was either not worried, or varying shades of worried, depending on what was going on. He just did his job, shoving rounds into the breech as best he could. This also matches my experience. Though there was plenty of worrying (and time to worry) in the 99.99% of the time that nothing was going on, once the shooting started, one just got down to business.

Ultimately, I only have my own personal experience to relate to. I don't think even interviews with the most eloquent of folks (not to say I'm not one of those) are going to be able to truly convey one's reactions in the moment.

In my case, like (I think) many, my first exposure was indirect fire -- though as it was just a couple of mortar rounds, it was hardly a traumatic baptism. When it came to direct fire, probably the biggest problem in a tank is figuring out that you're being shot at in the first place. For me, it was a night encounter, and my first thought was not actually "Ohmygodtheyaretryingtokillme," but "Oh, hey, look at that. Tracers." Followed closely by "Huh. They're coming in my direction". And then, eventually, "Wait. They're shooting at me. I'd better duck." At which point, based on what my gunner later told me, he never saw the TC and loader get down into the turret as quickly as we did at that moment. "SCAN RIGHT!" was the first thing out of my mouth, and then it was just 'revert to training.' Initially, I think we took the whole 'getting shot at' thing rather personally, but we got over that after a few weeks. Of course, even after seeing the (small) elephant, we still had difficulty with the whole 'realizing you're under attack' thing. I recall one convoy where I was the lead vehicle -- I heard a pop, which didn't seem that bad, happened to look over my shoulder after a few seconds, and saw that the HMMWV behind us had come to a stop, the troops had gotten out and they were shooting in all four directions. "Umm, driver, stop for a second. Gunner, come left. Something's going on." To drive home the point: Tanks are blind. 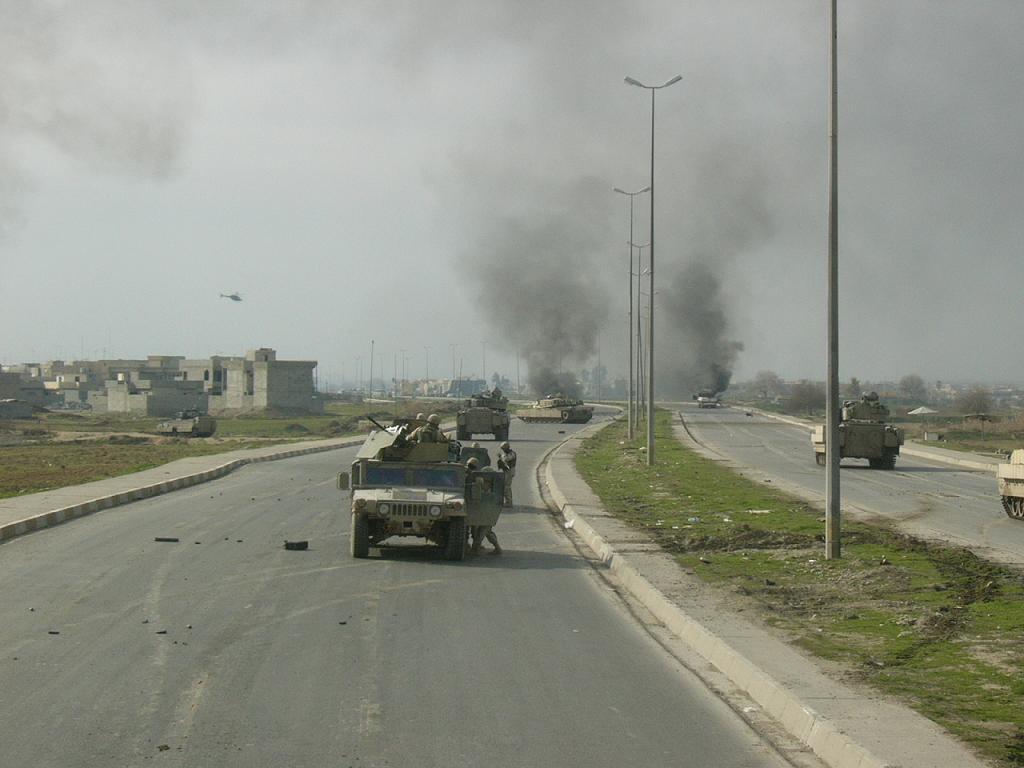 First the truck blew up, then lots happened. Note the Bradley to the left, the tank and HMMWV are facing opposite directions, and for good measure, one of the Kiowas in the background was forced down. I saw almost none of it. I spent much of the engagement saying "I can't see anything to shoot at!"

So where am I going with this?

I guess it comes down to the matter of "Analyzing things externally." It is often said, "Ask a Sherman tanker if he would rather be in a Sherman or Panther, and see what they say." Besides questions like "If I'm a Panther tanker and my tank breaks down, does that mean I have to go into battle as an infantryman?," it does spur the counter-question of "Ask a Panther tanker if he would want to go into combat against Shermans?" 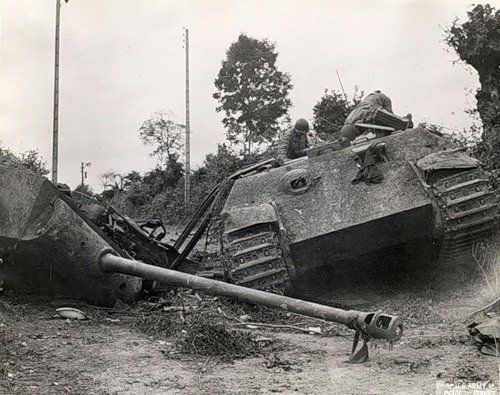 Did a Sherman do this? Do you think the crew cared?

After all, we know that Armored Force lost some 1,500 tankers killed in the entire war. Plus some officers, clerks, etc. who weren't on Armored Force's books, but we're probably still looking at well under 2,500. I strongly doubt that the numbers of killed Panzertruppen is that low. I further suspect that, much as has been noted in the memoirs of aviators, the growing number of empty seats at the chow table probably had more of an effect upon their thinking than the mechanics of relative equipment capability or the results of any single engagement. I would wager that a German tanker who saw his friends get killed in combat with the Americans (or Soviets, or British or whoever) are going to be worried about going up against a Sherman. Not because the Sherman itself is particularly dangerous, but because the Sherman is used by the American Army, and the American Army, with all its components, is particularly dangerous.

In other words, I think a lot of the discussion common on the web today is entirely missing the point. As the movie said, when the first round goes past your ear, politics goes out the window. Your primary motivation is survival. Arguing over whether a Sherman or M36 is more dangerous to you tomorrow is missing the woods for the trees, as you're really concerned about getting through to the end of the war next year, while an entire army is trying to kill you with everything it's got. If you're on the side that's winning at that time, you might feel better about your chances, but the worry will remain. But at that, that's when you're sitting in the rear, having chow. When the shooting starts, when you are having that significant emotional event, it comes down to 'do your job, your colleagues will do their jobs, and you'll come out OK in the end.' That's the mantra, and you don't stop to consider it until well after the fight is over. In fact, the event isn't all that significant, given you're probably not paying any attention to your emotions at the time. (Note: I had Pigeon of War review this article, and his experience matches mine. In his first engagement, even after the second truck in his convoy got blown up, he just went about his business and didn't really think about it.)

Anyway, that's my two cents on the matter. As I said, this is purely my personal opinion and observation. It's entirely possible that those of you reading this who have also been on a two-way firing range felt nothing like I did, and were either scared witless during the fighting, or felt totally invulnerable from the moment you arrived in theater unitl the moment you left. But I would ask that folks stop with the 'projected emotions' as an argument. Emotions are just that. Not reasoned, not considered, just... feelings.

Bob has suffered a bit of a breakdown, but in the meantime, here's the link to the forum discussion.