The Chieftain's Hatch: German Tactics, as Told by the USSR

Bizarrely enough, a lot of the information the US got from the Soviet front were simply translations from Soviet publications. Particularly, “Red Star,” the Soviet version of Stars & Stripes.

Below is the first of two articles considered to have been important enough to be translated and delivered home by the US military attaché in Moscow, and its archives where the articles have languished since. It's always interesting to see the view of things from lesser-known perspectives. Obviously, as a mass-distributed publication, nothing too secret is revealed here, but it is worth observing that the paper's audience is the common soldier as much as anyone else. The piece below may be a little higher a level than the private soldier can influence, but it could have provided information to him as to why he is being asked to do what's written below.

And so, here's a commentary on tank tactics of the Germans, as written by Lt. Colonel Zubkov on April 20, 1943.

From the very beginning of the war, the Germans used their tanks in mass to make concentrated attacks against deep objectives. Up to the Winter of 1941-42, the tactics of all German units were based on the tanks; these fought in massed formations and were not used to support infantry. This did not mean that they fought without infantry. The tank units had their own motorized infantry. 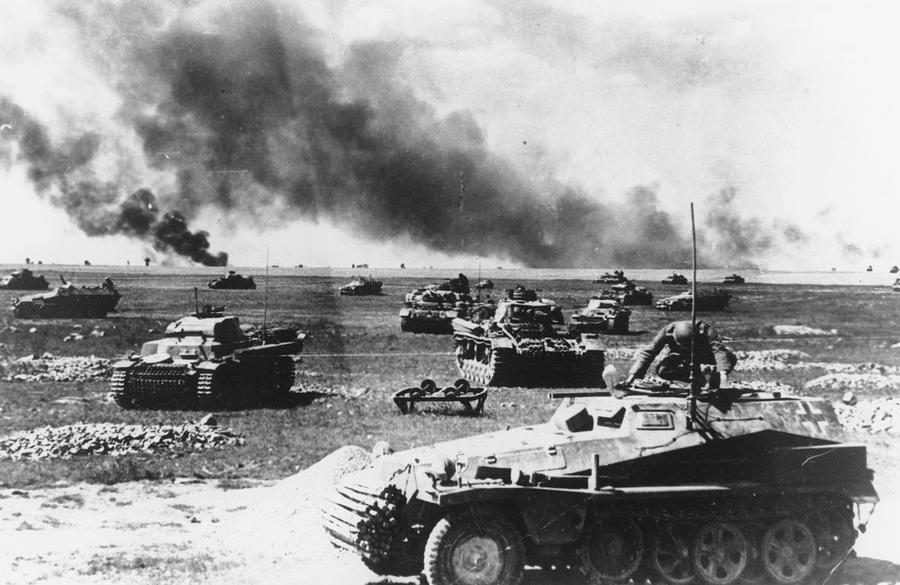 Because it was found that infantry could not alone carry out its missions after the winter of 1941-42, the Germans began to attach small groups of tanks to the infantry divisions. These tanks were forced to open up routes of advance for the infantry.

During the winter of 1942-43, the Germans were forced to still further distribute their tanks and attached them to infantry units of smaller than the division. They began to organize composite assault tank forces, and never since have they used tanks in mass. By the end of the second year of the war, not only are the Germans departing from the existing organization of tank units and combat teams, but they are even placing tanks in the motorized infantry divisions.

The largest German tank unit is the tank army, and the smallest unit capable of fulfilling a combat mission is the armored division. Such divisions are used for the following missions: Penetration of security screens; timely occupation of positions important to subsequent maneuvers; sudden attacks against leading enemy elements; attacks against sectors not wholly prepared for defense and attacks against prepared positions on a narrow front. The main mission of the tanks is the development and exploitation of the breakthroughs.

All attacks are usually executed by tank regiments which have (according to tables of organization) about 200 tanks. They operate in two or three battalion echelons -- if two echelons, two battalions compose the leading echelon and one in the rear, whose mission is to develop the success of the leading echelon. With the second echelon is the anti-tank artillery.

During the attack, the enemy tanks deliver intensive fire directed principally for effect against morale. These tanks are supported from the air -- the planes endeavoring to pin the defenders to the ground by covering the battlefield. They do not drop their bombs all at once, but do so periodically, delivering automatic fire against ground elements in the meantime.

The measures taken to meet such attacks are chiefly in disposing in-depth anti-tank weapons and primarily artillery; also in the use of the mobile anti-tank reserve against enemy tanks which break through, and of mobile infantry reserves to meet the enemy motorized troops.

Experience has shown that when Germans run up against a strong anti-tank position, they are unable to obtain success and are forced to withdraw.

To be successful in repulsing tank attacks, careful attention must be given to reconnaissance. This reconnaissance must establish exactly where the enemy intends to deliver his attacks. It is necessary to determine the plan of the Germans; the positions they're expected to break through, and to take timely measures to meet them. All reconnaissance means must be employed to determine regroupings and concentrations of enemy troops.

Germans usually try to attack the flanks of units or through the intervals between units. As soon as the concentration of tanks is known, immediate steps must be taken to establish a complete anti-tank fire system with mutually supporting fires. Supporting fires may be best attained by echeloning in great depth, and so disposed as to bring fire against the tanks from the side. It is most important that the individual soldier has the determination to wait for the opportunity to deliver flanking fire.

In the German Army, all troops support the tanks. If the defenders will pay no attention to the air attacks and concentrate all of their fire on the tanks and cut off the infantry from supporting small arms fire, the attack will fail. At no time should the ground units dissipate their fire by firing at airplanes. These must be left to the anti-aircraft batteries. For the artillery, armored units and grenadiers there is only one target -- the tanks -- and no matter how many planes are overhead, all troops armed with anti-tank weapons must concentrate only on tanks. 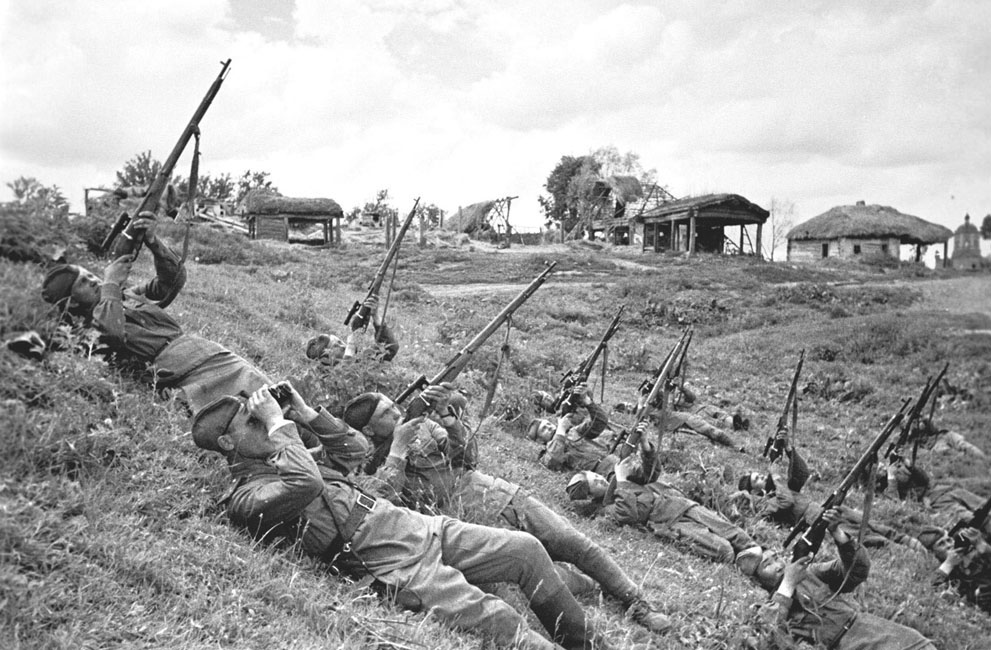 Recent battles have shown that the Red Army has been able to break up these German "wedge" tactics. Careful reconnaissance with repeated aerial photographs will reveal where the enemy will attack. Once having learned this, speed to meet it is essential.

Frequently, the attack cannot be broken up by the leading echelons; in which case, the successive echelons in depth must do the job. Energetic and vigorous counterattacks by the mobile anti-tank units against the flanks will bring the desired results.

It should be stated that once having sustained some losses, the combat power of the German units dissipates rapidly. To overcome this, the Germans frequently attach detachments from other divisions, and this is even contrary to the German concept of accomplishing combat missions.

In defense, the Germans depart from the accepted role for tanks and use them in small groups acting in close coordination with other arms. These groups are used for counterattacks. Experience has shown that as soon as leading tanks are put out of action by anti-tank artillery that accompanies the attacking infantry, the remainder of the German tanks usually withdraw and attempt counterattacks from the flanks.

Tanks that become immobilized are dug in and used as stationary gun positions. It is best to avoid such positions entirely, destroy them with artillery fire, or isolate them in the same manner as against a bunker or dugout.

The Germans sometimes try to accomplish their defensive missions by offensive methods -- by delivering distracting counterattacks to lessen the pressure on the main sector. In such cases, they do not divide their tanks out but use them concentrated. Neither do they divide their tanks in delaying actions or when securing the flanks of large units on a wide front. 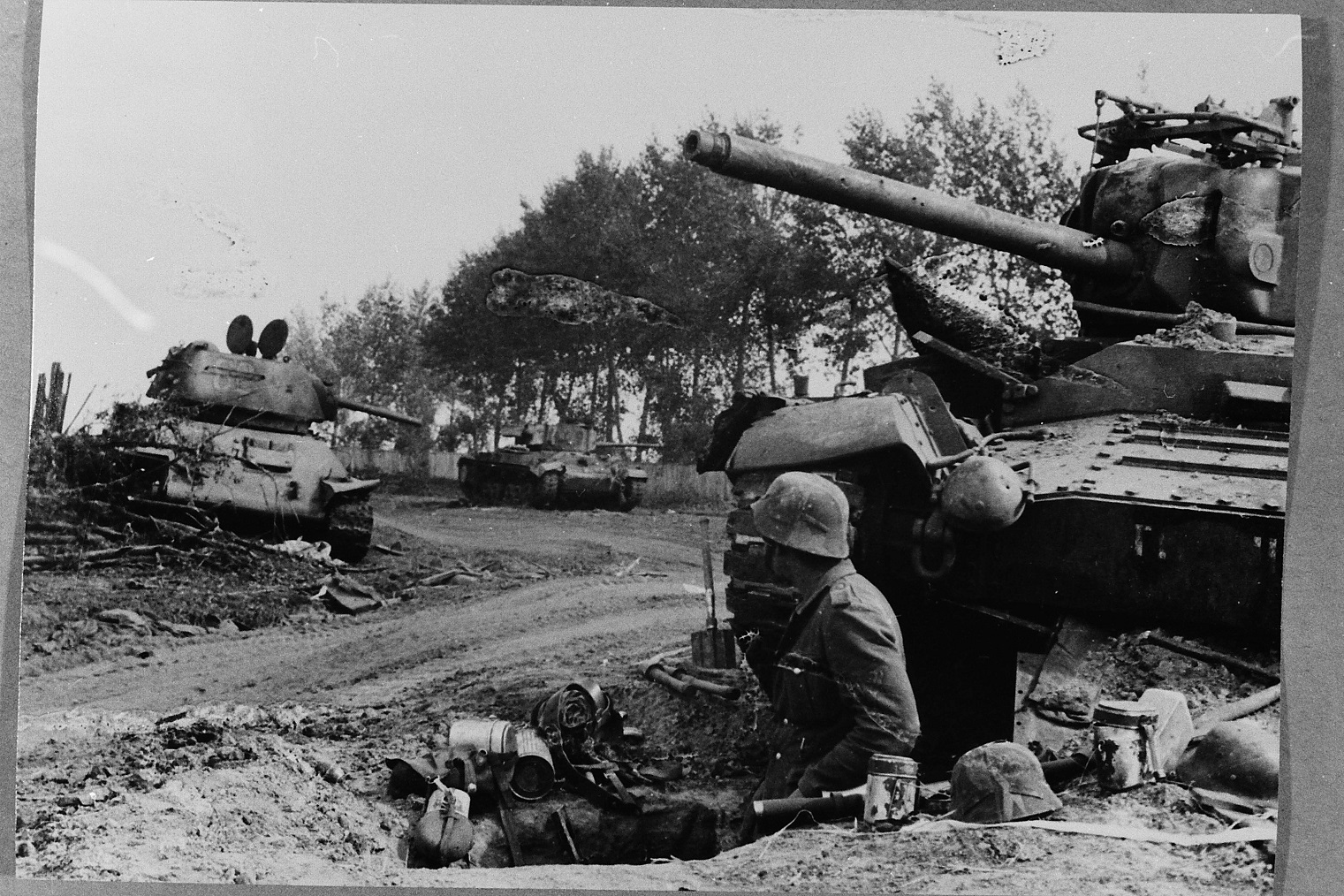 There are different methods against such tactics. Against counterattacks by tanks, the same methods are used as against other enemy tank attacks. It is preferable to go around enemy tanks which are protecting flanks or covering wide intervals in the front, and to place mobile anti-tank weapons off to their flanks. There is no rule to cover all cases. The situation itself will indicate what is to be done. In some cases it is advantageous to attack the enemy tank division on a wide front. It is enough to slip through its combat formations and cut it off from the rear and its transport to reduce enemy materiel to simply dead weight.