The Chieftain's Hatch: Tigers and Panterras

Sticking with the Soviet observations relayed by the US, I have a couple of documents referring to specific German heavy tanks.

First, a document sent from Moscow dated Sept. 7, 1943, on the "German Heavy Tank Mark V." It starts with a description pretty close to reality. 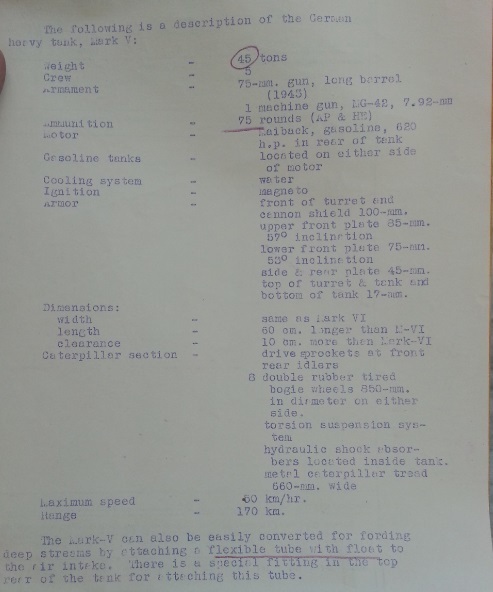 The Mark V can also be easily converted for fording deep streams, by attaching a flexible tube with float to the air intake. There is a special fitting in the top rear of the tank for attaching this tube.

The overall appearance of this tank closely resembles the Soviet T-34. The inclined armor plate, cone-shaped turret and Christie-type suspension wheels are very similar to the [T-34].

The Mark V, while having smaller armor and armament than the Mark VI, has the same motor, thus giving it a much higher speed and maneuverability.

This tank also has a light armor plate, 4-6mm thick, along the side, just above the suspension wheels and the inclined side armor plate.

Mark V tanks are organized into separate tank battalions similar to the Mark VI tanks. Many have been used by the Germans during the July and August battles.

The Soviets state that this tank, though more maneuverable, is much easier to knock out than the Mark VI. Fire from all types of rifles and machine guns will blind or jam peep holes, periscopes and the base of the turret and gun shield. High explosives and armor-piercing shells of 54mm caliber or higher at 800m or less are effective against the turret. Large-caliber artillery and self-propelled cannons can put the Mark V out of action at ordinary distances for effective fire. The inclined and vertical plates can be pierced by armor-piercing shells of 45mm or higher. Incendiary armor-piercing shells are especially effective against the gasoline tanks and the ammunition, located just in rear of the driver.

The additional 4-6mm armor plate above the suspension wheels is provided to reduce the effectiveness of hollow charge shells [Actually anti-tank rifles, but the Allies weren't asking the German designers that sort of question at that time --Chieftain], but the Soviets state that it is not effective. Anti-tank grenades, anti-tank mines and "Molotov cocktails" are effective against the weak bottom and top plates, and the cooling and vent openings on the top of the tank, just above the motor.

This tank comes in the standard quantity, though the rate of production is unknown. 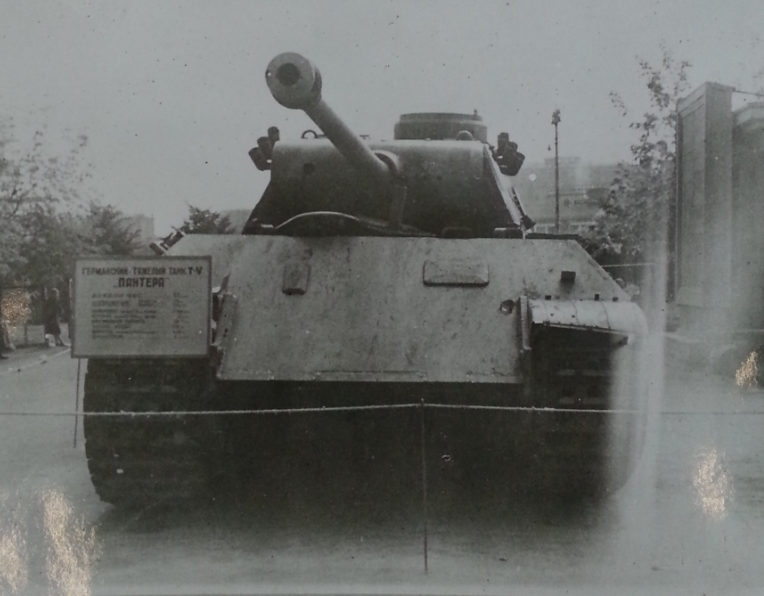 One of the photographs attached with the report. The letterbox hull MG and twin gunner's optic ports are common to both the Ausf D and early Ausf As, but the high TC's cupola marks this as a D model.

This document was sent by Lt. McCabe, a cavalry officer and assistant military attaché. If you're curious, the lead attaché was Brigadier General Joseph A. Michela. It is worth noting that this was not the first message sent from Moscow to the US about this new German tank, but it is far more detailed than earlier notifications.

The other article, again from the Red Star, is dated July 24, 1943, and refers to dealing with "Tigers" and "Panterras." It is worth noting that this paper was published pretty much immediately after the Battle of Kursk, which was the Soviets' first introduction to both the Panther and Ferdinand. It seems quite likely that by the time the article was written, the Soviets had not yet correctly matched the names of vehicles with the vehicles themselves.

The backbone of the German tank units this year consists of the heavy Mark VI tank and the self-propelled gun "Panterra." The Mark VI, or "Tiger," is a 60-ton tank with heavy front armor and heavy armament. In the German plans, it was to play the role of a battering ram, clearing the way for lighter forces and itself invulnerable to Soviet artillery. The 70-ton "Panterra," with even heavier armor, was to have much the same role as the "Tiger." During the first Soviet engagements with the "Panterra," it was mistaken as a tank, whereas it really serves a dual purpose as tank and self-propelled gun (tank destroyer). However, the "Panterra" is unwieldy and slow, and its cannon can fire only to the front (having very little traverse or elevation). Combat experience on the Orel-Kursk front in July has shown that both the "Tiger" and "Panterra" are easily set on fire; the latter with hits on the side armor where the fuel tanks are located. Even though the armor is seldom pierced, the fuel is usually set on fire.

The methods for fighting both the Mark VI and "Panterra" are the same. The following examples are illustrative. 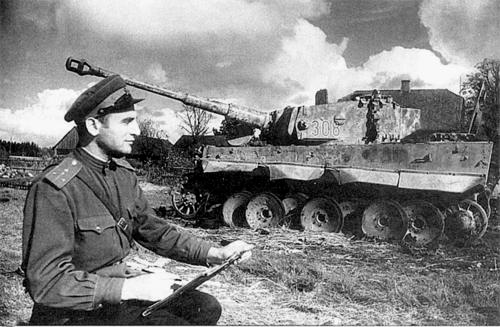 1. Mark VI. During one engagement, the Germans attacked Soviet positions with 300 tanks, 50 of which were "Tigers" or "Ferdinands." The Soviets had 12 self-propelled guns (caliber not stated, but it is known they posess 45mm and 105mm, and very probably possess 76.2mm self-propelled armored anti-tank guns) located in depth and well camouflaged. As long as the fight continued in the forward areas, the Soviet self-propelled cannons remained under fire and silent. When four "Panterras," twelve Mark VIs and several medium tanks broke into the Soviet rear area, the Soviet self-propelled cannons moved out of their earthen fortifications. (It has become common practice not only to dig in artillery pieces, but also tanks and self-propelled guns in rear or defensive areas).

Fire was opened at 500 meters and concentrated on the "Tigers" and "Panterras." This distance decreased to 250-300 yards during the course of the battle. At 500 yards, the Soviet shells penetrated the turret and sides of the "Tigers." At 300 yards, penetrations were made in the front armor plate of the "Tigers" and direct hits sometimes blew the turrets off. Hits on the sides at 300 yards opened large holes (probably due to brittleness of the armor plate). Heavy shells struck the tracks at 300 yards, completely disabling the tractor section.

2. The "Panterra" was more difficult to handle due to double the thickness of armor plate carred by the "Tiger." However, the caterpillar section is equally vulnerable, and the sides can be pierced, or hits may ignite the fuel. The majority of "Panterras" were set on fire when hits were made on the sides where the gasoline tanks are located, even when the armor was not pierced. 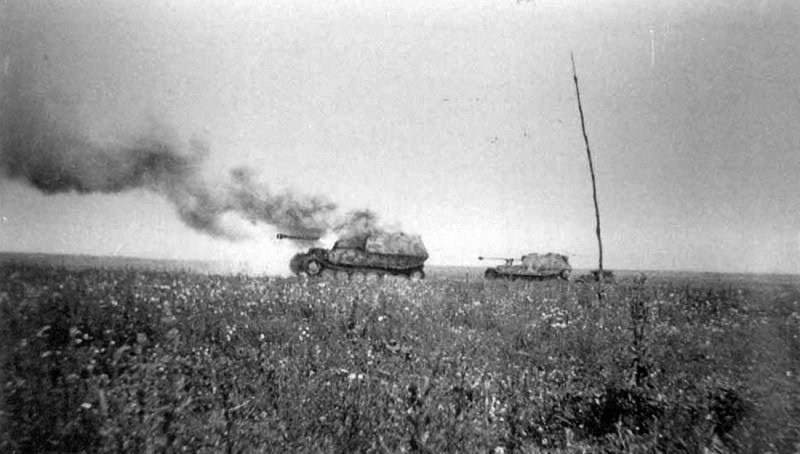 The above examples, and many others, indicate that the most effective method of fighting heavy tanks and other thickly-armored vehicles is with large-caliber self-propelled artillery. However, the artillery must be skillfully handled. If fire is opened at too great a distance, it is not only ineffective, but discloses the guns' positions, and consequently draws the fire of German artillery, aviation and mortars.

Each battery's self-propelled guns should be located in a triangular formation at considerable distances from each other. Armor-piercing, hollow-charge or high-explosive shells can all be used. Fire from all three positions is especially effective against the "Panterra," since it can only fire to the front. While it is trying to silence one gun, the other two can continue firing at its vulnerable side or rear and the gun being attacked can remain silent and under cover.

This method of fighting heavy tanks has been successfully and widely used by batteries of various calibers, but requires close coordination between batteries as well as between guns in a battery. After a coordinated plan is made the triangular method always works if the firing is accurate and precisde.

Another method of combating heavy German tanks is the use of a tank ambush. Sudden short-range fire from any type of tank is capable of disabling a heavy tank if accurately delivered. There have been cases where the Soviet light tank, armed with a 45mm gun, has disabled "Tigers" firing at short ranges at the tracks, sides and their sight instruments. [US reports indicated that such successes by M3 light tanks weren't unheard of in North Africa. --Chieftan]

Infantry tank destroyers with "Molotov cocktails" have set fire to the "Tiger." In addition, anti-tank grenades, mines and a number of ordinary hand grenades tied together have been effective in disabling the track sections.

It appears from this article that the "Panterra" is used as a tank, and actually accompanies the tank units into combat as a super-heavy tank. Both the Soviets and Germans appear to be using heavy-caliber, self-propelled armored guns both on offense and defense. Little is known of the Soviet guns, except brief glimpses of them around Moscow and some reports of them on the front. The two most common types of Soviet self-propelled guns are a 105mm howitzer on the T-34 chassis, and a 45mm gun on a light tank chassis (the type of tank is unknown, but is believed to have been heavier than the T-40; possibly 15 tons). Since the Soviet 76.2mm gun has been adopted by the Germans as a standard gun on self-propelled mounts, it is very possible that the Soviets also use it.

Again, one is struck by how Red Star is publishing objective tactical and technical thought, as opposed to the 'feel-good' stuff one might expect to find. (Not saying that there wasn't some feel-good propoganda in Red Star, but a somewhat balanced assessment is worth remarking upon). One is also surprised by the apparent unfamiliarity with Soviet equipment displayed by the US Attaché. Were the Soviets keeping their own information close to their chest, and not even telling the Americans?
Although it is obvious that one would not put "Ohmergodz, WunderKruppstahlwaffen Panzers come to doom us!" type of article in the army's own publication, the overall tone is pretty much what one would expect of an objective assessment of the time. "These new tanks are dangerous, and worthy of respect, but we have shown that they are beatable", as evidenced by the fact that, well, the Soviets beat them.