For Part 2 of the Pershing development overview, I’m going to hand the keyboard over to some poor un-named sod in the Ordnance Branch in about 1946 whose job it was to type out Ordnance’s after-action report for the war. One part of this AAR was “Ordnance’s interactions with other agencies”, and for the section on ‘dealing with Army Ground Forces’, they chose to use the T26 development process as an example. I thus copy below, again without comment (I’ll save the analysis for a future part), with the caveat that the below is purely from Ordnance’s perspective. Over to you, aforementioned poor, un-named sod: 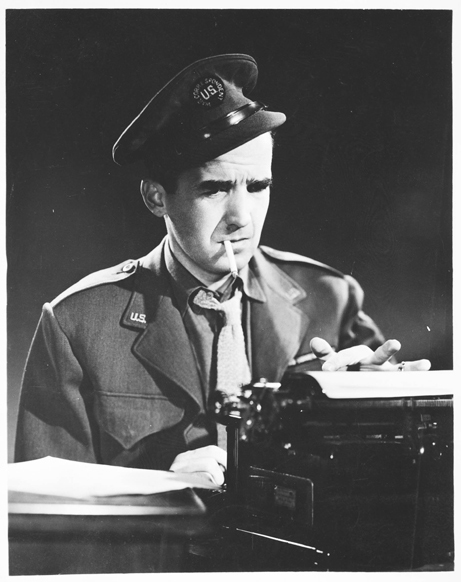 The chasm separating the AGF position and the Ordnance position regarding the development role of the Ordnance Department is most evident in the controversy relative to heavy tanks. This dispute was increased in intensity by another difference of opinion as to the value of heavy tanks. Lt. Gen. Lesley J. McNair, Commanding General, AGF, was one of the founders of the school of thought which held that the best defense against armor was armament, that tank-versus-tank battles were neither necessary nor desirable. This school of thought, therefore, did not believe it imperative that the United States remain at least abreast of Germany as regards the size of tanks.

One type of heavy tank, the M6, weighing about 60 tons and mounting a three-inch gun, had been standardized in February 1942, before the creation of Army Ground Forces. This tank was not put to any appreciable use, however, because Ordnance attempts to create a requirement for the M6 were rebuffed by AGF and production of only 40 of these tanks was authorized. 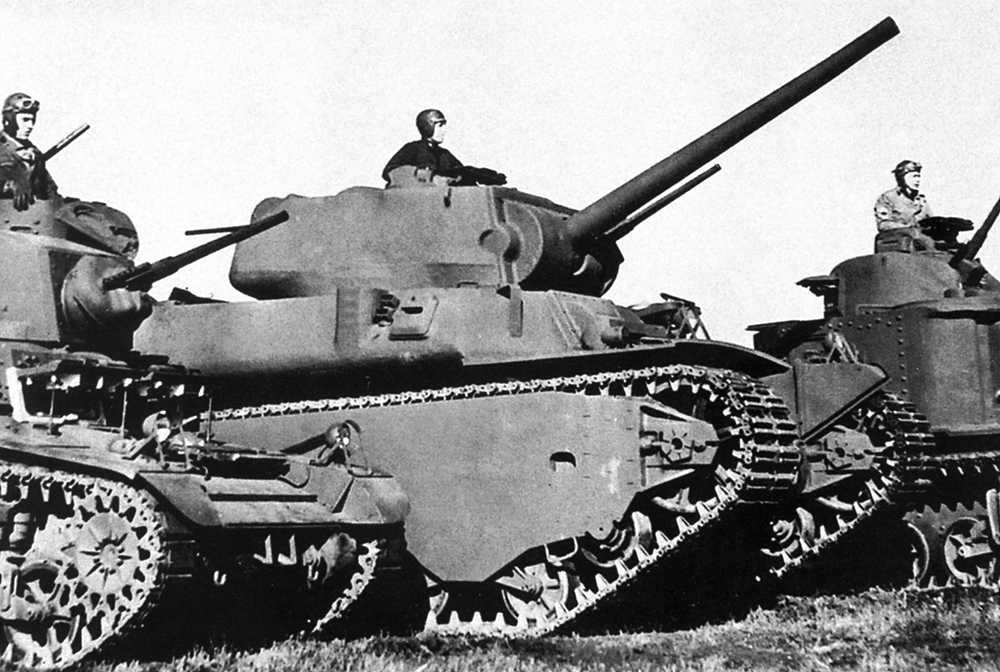 While the Heavy Tank M6 was being written off as a usable combat vehicle, the Ordnance Department, with the approval of Services of Supply, had begun the development of a new medium tank, the T20, which wall expected to take the place of the Medium Tank M4. As the T20 developed, it grew heavier until it reached in the T25 and T26 models, the proportions of a heavy tank. From whence came the impetus for the construction of these heavy tanks (the T25 was to be a medium tank mounting a 90-mm gun and the T26 was to mount the 90-mm gun and armor equivalent to that of the German Mark VI) is subject to debate between AGF and the Ordnance Department. AGF was of the opinion that "the using arms desired development of this type of vehicle with heavier armor and a 90-mm gun.” In writing the Ordnance Committee Minute suggesting development of the heavier tanks, however, Ordnance reported that "the Ordnance Department requested that at least 50 tanks be equipped with 90-mm guns which was agreed to by General Devers (Armored Force) and General Moore (AGF)." Representatives or the armored Force and the Tank Destroyer Command signed this proposal on behalf of the using arms. 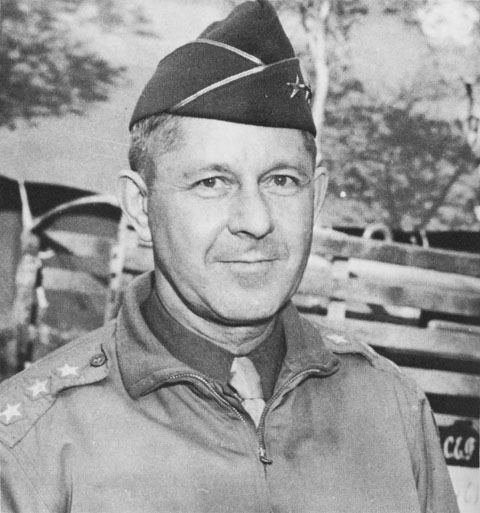 The T26 tank received some potent backing in November 1943 when General Devers, erstwhile commander of the Armored Force and at that time commander of the European Theater of Operations, requested that 250 be produced. Production of only ten of these tanks had been previously authorized. As the developer and enthusiastic believer in the value of the T26, Ordnance was entirely willing to accede to the request of General Devers. When asked to comment on the ETO request, AGF made two replies, both unfavorable. In these memoranda, one prepared personally by General McNair, AGF contended that the M4 series of tanks was adequate for the defeat of Germany and that these tanks, plus a suitable tank destroyer, were the logical answer to the heavier German tanks. It was recommended that the T26 continue to be considered only a developmental type.

Despite the objections of AGF, General Devers, in December 1943, repeated his request that 250 heavy tanks of the T26 type be produced. Personnel of the Requirements Section, AGF, recommended that General McNair repeat the AGF objections, claiming that no heavy tank had yet been found satisfactory. That torsion bar suspension had never been used before on tanks even half as heavy as the T26, and that the adequacy of the power plant proposed for the new heavy tank was questionable. General McNair, however, refused to continue this aspect or the controversy and raised no further objection to the procurement of a total of 260 T26 tanks. Although General Barnes was reasonably certain on 11 December 1943 (the day after General Devers' second cablegram) that Ordnance would be allowed to build the additional 250 heavy tanks, official notification of the change in the program was not received by the Ordnance Department until 10 January 1944.

Despite the fact that Ordnance had been allowed to proceed with the limited procurement of 250 additional units of the T26 this number was not sufficient to assure creation of the production capacity which would be necessary should the War Department decide to go into mass production of the heavy tank. Ordnance, therefore, was anxious to receive authority for limited procurement of a still larger quantity. Ten days after receipt of permission to procure the additional 250 vehicles, General Barnes met with General Moore of AGF and expressed the hope that AGF would "go along with the program on the T26 (the size of the proposed procurement program was not indicated)," but General Moore did not hold the proposal in favorable regard.

More evidence of disagreement between the Ordnance Department and AGF concerning the value of the T26 tank is given in a February 1944 conversation between General Barnes and Colonel M. K. Barroll, an Ordnance officer serving with the General staff. Colonel Barroll reported that he had "heard they (presumably AGF) want to put a lot of armor on the last of the M4A3s off the line and was afraid the main idea is to buck the heavy (T26) job. General Barnes asked Colonel Barroll to "watch" the situation.

Apparently no action was being taken by higher authority to increase the number of heavy tanks under procurement because by 28 February 1944 General Barnes was discussing the preparation of a letter to Headquarters Army Service Forces, for the signature of General Campbell, asking whether or not the War Department desired heavily armored tanks and, if so, at what rate of production. It was General Barnes’ opinion that further production of M4 tanks was a waste of government funds. No such letter was ever sent, although General Banes continued upset over the situation, two days later telling General William A. Borden, another Ordnance officer on duty with the General Starr, that he was in favor of informing higher authority that the Ordnance Department would assume no further responsibility for the probable lack of properly armored and properly gunned tanks for operations of late 1944 and early 1945.

In the following month, however, AGF opposition to larger production of the T26 was overridden and production of 6,000 heavy tanks (including 45 both T25 and T26 models) was informally authorized. A break in the deadlock between Ordnance and AGF was foreshadowed 5 April 1944 when Robert E. Patterson, Undersecretary of War, telephoned General Barnes to tell him that Lt Gen William S. Knudsen, War Department production director, had been talking about the new tanks. Mr. Patterson expressed interest in the vehicle and said he would like to see the new tanks produced in 1944 and inquired as to what should be done to bring about that end. General Barnes suggested that Mr. Patterson talk to General Somervell about getting a production order released. The need for production of the larger number of heavy tanks was made known to the Ordnance Department within a week. General Barnes told his Executive Officer, Colonel S. B. Ritchie, that the large order had come as a result of a reversalof AGF position with respect to heavy tanks. Army Ground Forces, however, said that the production authorization had been increased by the War Department over AGF objections. 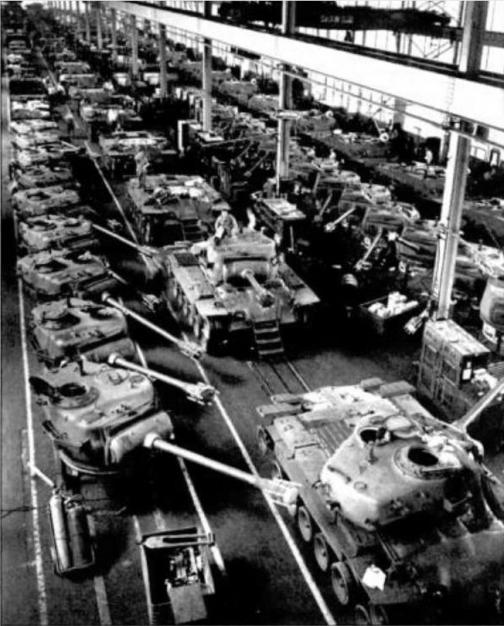 Even though it had been overruled with respect to the extent of limited production of heavy tanks, AGF continued dissatisfied with these vehicles and asked that 75mm and 76mm guns replace the 90mm guns included in the basic design of both the T25 and T26. AGF had been pondering such a request in April 1944, but delayed making it until July. Army Service Forces agreed to a study of the possibilities of the lighter guns on these tanks and passed the letter to Ordnance. The Ordnance Department was merely lukewarm to this proposal, suggesting that it be given low priority, since Ordnance already had formal authorization for completion of the development 'of the tank mounting the 90mm gun and all available personnel were at work on that project. It was also pointed out that the 75-mm gun was currently available on the new M24 Light Tank, the 76-mm gun on the M4 Medium Tank. Army Ground Forces did not belabor the issue, merely asking that study of the lighter guns be undertaken when current projects were completed. In the beginning of this discussion of the size of the gun to be mounted on the T26, General Campbell told General Barnes he would be inclined to include the 90-mm turret on the vehicles coming off the production lines, pending the outcome of the controversy. All T26 tanks produced mounted the 90-mm gun.

"The policy of the Armored Force was that the M-4 medium tank was already in large production and was the one tank that could be delivered in quantity for the operations in 1944. Therefore they felt that the first priority on development should be the elimination of the bugs from the M-4 tank to make this vehicle as effective as possible on the battlefield. Following this development they proposed to modify the M-4 tank to provide it with the 90-mm gun in order to get this weapon on the battlefield by 1944. It was the feeling of the Armored Force Board that General Barnes and Colonel Colby of the Ordnance Department, by dropping the development of the M-4 type tank and proceeding with an entirely different and new design as exemplified in the T20 series of tanks which was finally standardized as the M-26, would not be able to get the service tested tank in the theaters in quantity in time to be of any real value. They felt that the M-4 modified to incorporate the 90mm gun would enable them to get tanks with high powered guns in the theater in time to be used in 1944. I am told that it was General McNair himself who ruled against the installationof the 90mm gun the M-4 tanks. In making this decision I understand he acted on the advice of his G-3, General Lentz, rather than the Development Section of his Requirements Division.'

That's it for now. Next time we return to this topic, we shall likely have a look at just how the Zebra mission got off the ground.

I bring back Bob from his/her vacation, for the forum thread.

For those of you who don't know, I've a Facebook page here , and once in a blue moon, I stream at http://www.twitch.tv/the_chieftain