It’s about time that we started to have the long-awaited look at the fielding of Pershing. There will be a couple of articles on this matter, not necessarily consecutive Hatches. There are, of course, varying schools of thought as to just why the M26 entered into the war so late that barely a score saw combat service, with theories that perhaps they could have been commonplace by Christmas 1944, or even D-Day. I hate to bring up Cooper, again, but I’m afraid it’s one of the most common refrains to dispel. McNair gets a lot of attention as well.

There is little doubt that the tank probably could have entered service earlier. Just how much, or maybe, little, acceleration would have been provided, though, is a more difficult question to answer.

In a lecture before the Army Industrial College in January 1940, the Chief of Ordnance, Major General C.M. Wesson, estimated that development of a major item of material required a minimum of three years. Wartime pressures, of course, would prove to lower this minimum but, even at that, most Ordnance projects took over a year to go from conception to implementation.

I work primarily with Ordnance records, and one must always be cautious of bias in some of Ordnances’ opinions or conclusions, especially where Army Ground Forces are concerned. The dates of decisions and stages of development, however, are not really open for discussion, so we may as well start by focusing on those in this Hatch. 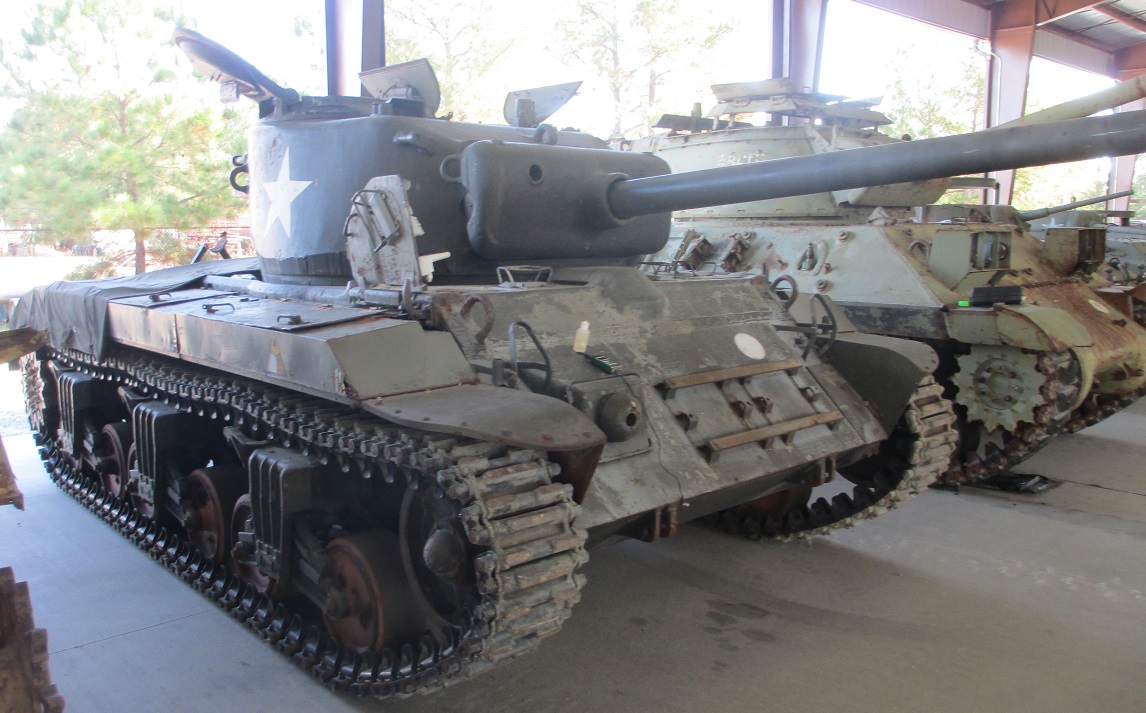 We’ll join the story of M26 on 15 April 1943, with the T23 program proceeding nicely with an order just having been placed to procure 250 of the things for service test, and to try torsion bars as well on one or two of them. General Campbell was of the opinion that it might not be a bad idea to put 90mm guns on the tanks, but General Devers of the Armored Force was not so enamoured of the idea. As something of a compromise, General Barnes suggested dividing the 250 T23s into several groups. 200 of them with a 76mm gun, 40 with a 90mm gun, and an additional 10 with 90mm guns and heavier armour. This ‘limited procurement’ plan was approved by the Ordnance Committee on 6 May 1943, and the two 90mm vehicles eventually became designated T25 and T26.

As development seemed to be progressing well enough on these two vehicles, by Sept 1943 Ordnance recommended that the production numbers for the two 90mm tanks be increased to 500 of each type, the idea being to set up for mass production. Army Service Force did not approve of this, but a smaller request in December 1943 saw ASF on 8 January 1944 accede to the production of 250 T26s, with the decision that there was an operational need for the vehicles after all, and perhaps production should be expedited. Prototypes for T25E1 and T26E1 started to be delivered in February 1944.

Army Ground Forces, who also weren’t incredibly enthused by the entirely new tank decided by April 1944 that they wanted 1,000 T26s. But for whatever reason, they requested that the T26s be armed with 75mm and 76mm guns. (There was also brief investigation into the 17pr, incidentally). This desire was subsequently refined into a general desire to mount the smaller guns, without reference to numbers.

By August 1944, Ordnance branch attempted to have T26E1 standardized, but Army Ground Forces disagreed, pointing out that the tanks had not yet been thoroughly tested. That didn’t stop the procurement wheels turning, however, for by the 1 October 1944 issue of the Army Supply Program, 3,265 T26s had been approved. (Not that the tank was approved for production, but that the Army could buy them if they wanted)

Although Ordnance pushed for the T26 to be given battlefield testing, AGF refused to countenance it until Armored Board, part of AGF, had completed their testing and declared the vehicles battle-worthy. They may have had a point: Testing of T25E1 at Aberdeen, Phoenix and Milford Proving Grounds all indicated a large number of failings. Armored Board subsequently declared that the vehicles be considered not battle-worthy. Testing of T26E1 at Aberdeen, Milford and Ft Knox indicated the same general deficiencies in the heavier tank as the lighter, but since T26 wasn't any -worse-, and still had more armour, it was recommended to abandon T25E1 and continue with T26E1.

Armored Force considered T26E1 to be not battle-worthy, principally because of the following major defects:

So significant were the changes required, that it also resulted in a new nomenclature to E3. These changes, amongst others, saw:

Elimination of the turret platform, and rearrangement of the turret stowage. Addition of a muzzle brake. Elimination of water protected ammunition racks and an increase in the number of 90mm rounds from 48 to 70. Redesign of the differential to provide longer brake like. Redesign of the cooling system to provide increase cooling for differential, transmisison and engine. Strengthening of suspension parts and redesign of the track for improved grouser action. Increased ventillation for the crew compartment of the vehicle from 400cu ft to 1,000 cu ft per minute. Numerous changes in the electrical system and oil piping to give more reliable performance. The steering ratio was changed to increase brake life.

Although the General Staff later overruled the AGF and authorized the dispatch of the 20 Pershings to Europe for testing on the two-way firing range, before they got there the Armored Board completed its testing. Armored Board did conclude on 20 January 1945, before the tanks reached theater, however, that the T26E3s were significantly improved and should be considered battleworthy. They did point out that it was still not perfect, with insufficient traction, weak suspension, ballistically weak engine compartment grills and insufficient cruising range, but they would be happy enough to have those modifications made in the course of production. In the meantime, send the tank. Even before the testing was completed, though, testing was so promising that 2,500 additional tanks were ordered as lmited procurement type in early January 1945.

It was thus 22 March of 1945 by the time Ordnance had implemented the recommended changes requested by the Armored Board and recommended also that the vehicle be standardized as M26. Though it would not be until May that ASF formally approved this recommendation, they did provide informal approval in March and processes worked on from that.

So those are most of the significant dates in question.

Bob the Dutiful will take you to the forum thread. For those of you who don't know, I've a Facebook page here , and when I get back from my trip, I promise I'm going to try streaming more, at http://www.twitch.tv/the_chieftain, probably late afternoon Pacific time.