The Chieftain's Hatch: Panther/M10 and the Laws of War

The Panther/M10 is back in the Shop, and it's fun tank to play. However, there are a few misconceptions going around about the nature of the vehicle. Probably the major misconception is the colloquial description of the vehicle as "the Warcrimes Panther." This is understandable, given the tank is very obviously equipped with the insignia of the Allied forces (the white star).

Its background also includes Operation Grief ("Griffon"), which was to sow confusion amongst the Americans, using Germans in US uniforms and equipment to do so. The Germans captured as part of this operation were executed by firing squad as spies. Unfortunately, like many claims as to what the Laws of War allow, the aforementioned misconception is not necessarily the case, and it can be argued that First Army were incorrect in executing the prisoners.

The operable point most folks will look to is the Hague convention of 1907 -- specifically, Article 23, which states that "In addition to the prohibitions provided by special Conventions, it is especially forbidden [...] to make improper use of a flag of truce, of the national flag or of the military insignia and uniform of the enemy, as well as the distinctive badges of the Geneva Convention." Well, there you go. The Germans used the military insignia of the enemy in warfare. Case closed.

This misses a few fine details, though. First, the fact that it's under a section entitled "Means of injuring the enemy, sieges, and bombardments." Second, the use of the word "improper" in the prohibition, suggesting there are proper uses. (A basic rule of interpreting law is that words are not needlessly added.)

So what is an improper use of the enemy flag or insignia? Where is the line crossed between a ruse de guerre (ruse of war) and treachery and perfidy?

The idea of "cheating" in a war is long and storied, going back at least to the Trojan Horse. Of course, if you want to get philosophical, why is "cheating" even considered bad? There is no "fair play" award to the loser, for example, and when your own existence is on the line, there is an argument for doing whatever it takes. History has shown that as folks get desperate, they will disregard "honorable combat" to one extent or another. However, the rules exist, and as long as you intend to follow them, the trick becomes figuring out which side of the line an action falls.

Perhaps you're familiar with those old pirate movies where a ship is floating along,the crew waves at a friendly ship approaching over the horizon, only to, at the last minute, react with horror and dread as the approaching ship lowers the ensign she had been flying, and replace it with the Jolly Roger. Avast! But, hey, they're pirates. Such evil trickery is to be expected, and that's why they're hung, right? 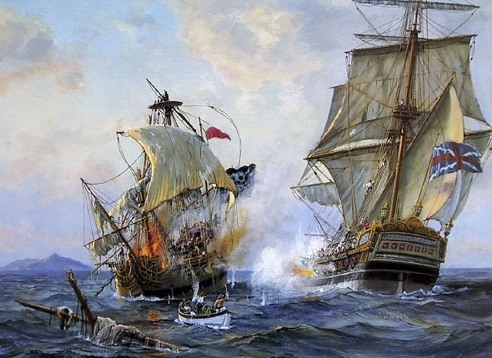 Well, no, not really. Such activities were considered perfectly legitimate for naval warfare. Sailing under the enemy's flag was never a problem, but shooting at them was. Now, you can certainly argue that there is little practical difference when you have only however long it takes to run down one flag and run up another in order to prepare yourself, and I'm not sure why this didn't simply result everybody sailing around under everybody else's flag by default. What makes the critical difference under the laws of war is that as long as you're not shooting at anyone, you're not using the enemy flag as "a means to injure the enemy" -- at least, not physically. In the movie "The Eagle has Landed," the Germans are discovered because they were wearing their own uniforms under the British ones in order to not be unlawful, and it's actually an accurate depiction of the laws of war, not just a movie thing. So if you can do that for ships, why should the principle be any different on land? It isn't.

During the postwar trial of Skorzeny, Allied personnel testified that they wore German uniforms as well (similar to the US Navy testifying at Doenitz's trial on submarine warfare). Peter Caddick-Adam's book "Snow and Steel" makes reference to Americans in Aachen leading with German vehicles, though I've not found independent verification. As long as the Germans did not engage the Allied forces whilst displaying the Allied uniforms and insignia, and I have seen no evidence that they attempted to do so, they committed no crimes. Now, quite how they planned on removing the white stars on the Panthers before engaging, I've no clue, but as the Skorzeny trial indicated, there was no indication that Skorzeny ever ordered or intended for the German forces to fire upon allied forces. Remember, it was an operation to sow confusion, not kill people.

What about those German troops executed for being spies? Again a common perception... "If you are wearing foreign uniform, you are a spy, exempt from the protections of the laws of war, and can be shot." What the tribunals seem to have omitted, however, is that one of the requirements for being categorized as a spy is that you are attempting to transmit information.

Take the current US Manual for Courts Martial. For one to be convicted of being a spy, it has to be shown:

There was no indication that there was an attempt to convey information to the German lines, only to muddle Allied information. Thus, again, the folks conducting Operation Grief were theoretically safe. Of course, there's no accounting for miscarriages of justice, especially when your side has just hammered the side doing the judging.

So that's the legality; what did they actually do? 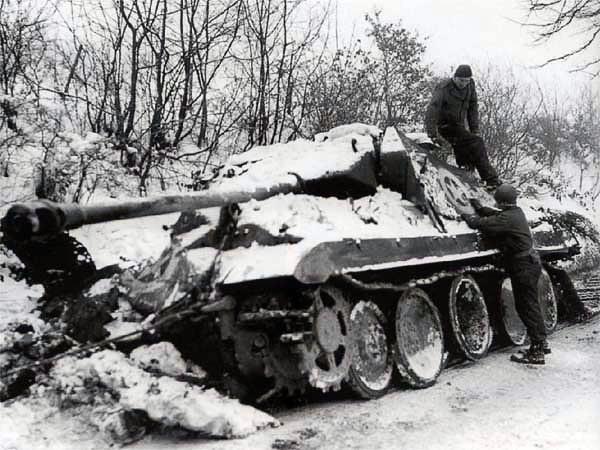 First, they decided to make their Panthers look like M10s. That in itself is an interesting choice, because the vehicle the Americans were most worried would be mistaken for a Panther and thus fired upon was, in fact, the M18. The Americans focused on the large roadwheels and muzzle brake of the M18 as key, defining characteristics. M10s, of course, had bogies, and no muzzle brake. Although the Panther/M10 in World of Tanks has no muzzle brake, the photographs of the captured real-world vehicles indicate that the Germans decided to keep theirs on.

In any case, M10 it was. Probably because of the large upper front slope, and the straight turret edges. The vismod (visual modification) panels were a little open at the rear, so that the loader's hatch remained accessible. 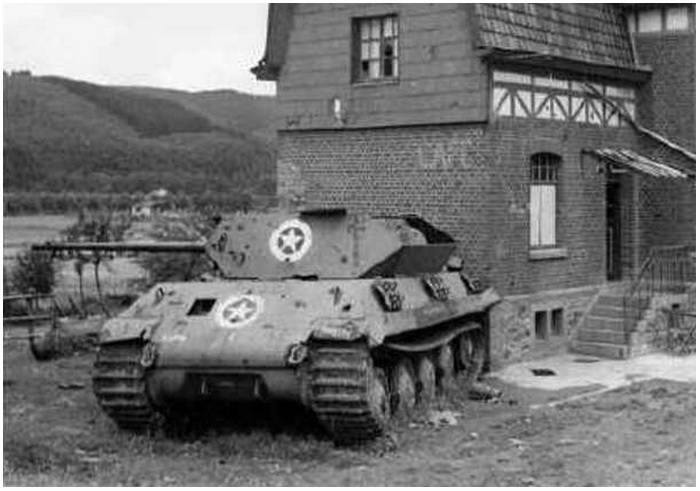 Up front, the bow machinegun mount was removed, and replaced with a simple removable panel. I haven't seen, but it would not be unreasonable to suspect that the MG mount was taken from an early Panther, which had the letterbox port before the MG ball mount was developed.

Finally, the cupola, which obviously no open-topped vehicle would have, was also removed, and replaced by a simple split-door hatch. 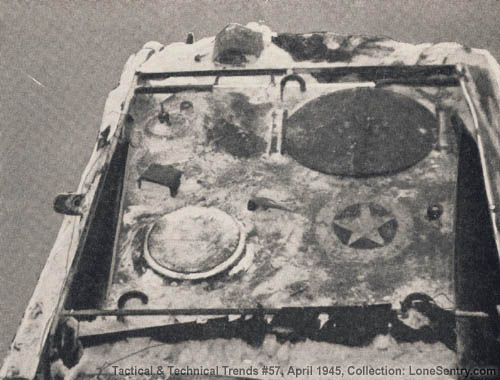 That's the tank! Go forth and have fun!