The Chieftain's Hatch: Defense of Ortona

It's perhaps easy to forget, but the Canadians did actually pull their weight in WWII, overshadowed as they are by the Americans and British. Given as it's coming up on Canada Day and all, I thought we'd have a look at the scene of what was probably the most vicious fighting that the Canadians undertook, the battle of Ortona.

The battle was so significant that I came across a copy of the "lessons learned" document in USA's Armored Force archives, so I'll go through it here.

Ortona, an Italian town of 10,000 people, sits on a ledge above the Adriatic, and astride the coast road from Termoli to Pescara. It is a port, a vital communication centre, and was of consequent importance to the Germans. The buildings are of stone or brick, several stories in height and built close together. The streets, though narrow are straighter than in most Italian towns and divide the buildings into recognizable, but irregular blocks. None of the side streets are wide enough to permit the passage of tanks. Several large squares, surrounded by the more prominent buildings form the center of the town, and the Citadel, a solid old relic of feudal days, occupies the promontory overlooking the harbor.

There is only one approach to Otrona, along a narrow ridge from the SW, for one flank is guarded by a deep ravine, the other by the sea.

One of the joys of modern technology is Google Maps, which allows a god's-eye view of the town today. The population is over twice what it was in WWII, and some imagination is required as you go around Street View, since Ortona was utterly demolished in the attempt to capture it. That said, the castle seems to have survived relatively unscathed.

Here's photos of the place, then and now:

Next is the description of the German tactics. The defending units were from the 1st Fallschirmjager Division; paratroopers. Fresh, fairly well-trained, and heavily equipped with light automatic weapons as befitted their role. This made them particularly suited for the close-quarters fighting to follow.

The enemy's plan for the defense of the town followed normal German tactical lines. The fact that the town could only be attacked from one side was of great assistance to him, and he planned his defense accordingly. The outlying houses of the town, facing our attack, presented a strong line of FDLs which could withdraw, if necessary, according to the plan of the German command. The "line of least resistance" would lead to the selected "killing ground," the central town square and the main street.

No previously constructed pillboxes were encountered, but the sturdy Italian houses afforded natural strong-points. Buildings were methodically blown across streets to form barriers or provide covered approaches to exposed positions. Any buildings which overlooked the main position, or which might offer cover for the attacker, were destroyed. In the buildings opposite his position the front walls were demolished, thus exposing their interiors to fire from across the street.

It has to be said that this is the first time I've seen reference to deliberately blowing the near-side walls of opposing buildings in order to deny the enemy cover, which usually results in two sides equally trading shots through windows -- a situation we're familiar with thanks to modern training and video games. I would be curious if infantrymen are still taught this technique today. It makes a hell of a lot of sense, but we've become attuned to not destroying things in training. Maybe I'm just a CDAT out of his element. 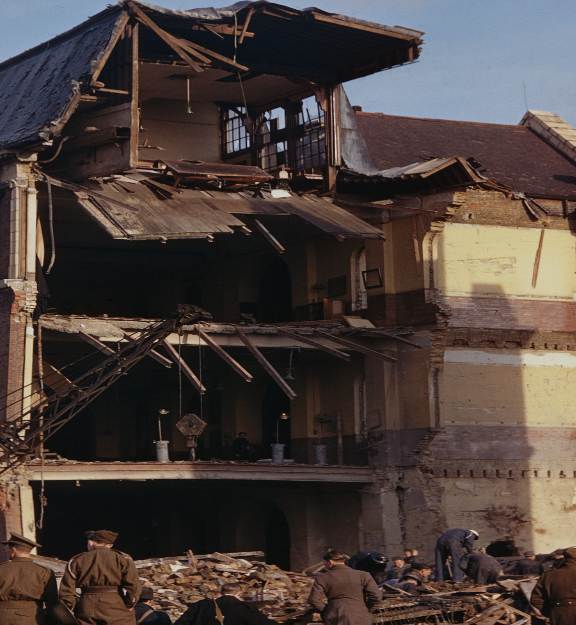 This photo of a building destroyed by an aerial bomb was taken in London, but displays the advantage of the defender, who has taken position in an intact building facing this one by destroying the near wall. Attacking forces would gain no cover from the building.

No two houses were defended alike, but the general arrangements seemed to have been Schmeisers, rifles and grenades on the main floor; shcmeisers MG42s and grenades on the second; and an assortment of grenades and automatic weapons on the top floor. The occasional rifleman was encountered on roofs and upper stories, but on the whole they were not used as fire positions. This was probably due to the continuous shower of shells and mortar bombs. 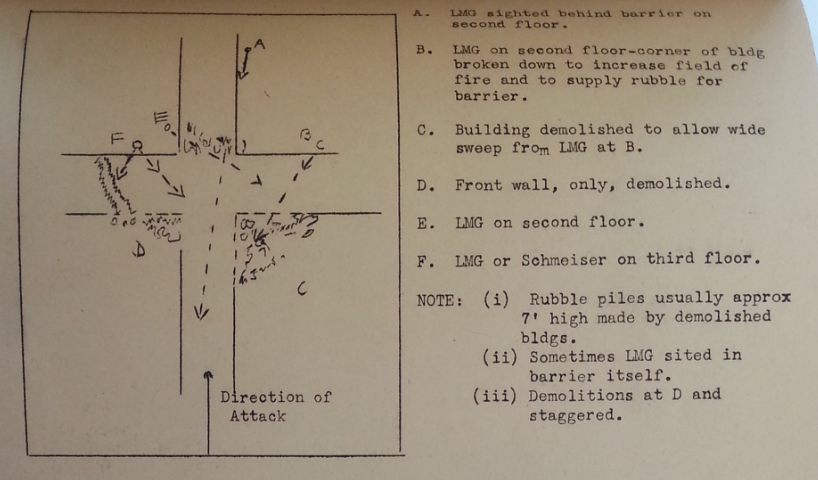 A typical corner setup at Ortona

All roads, except those leading into the pre-selected 'killing grounds,' were blocked by demolished houses which formed admirable barricades. These piles of rubble were in such a position that they could be covered from above and from the rear, as well as from the front. In some cases MG positions were found in the barricade itself, but this was not common. The rubble would normally be liberally sown with mines and booby traps which were very easy to conceal amongst the litter of dust and bricks. 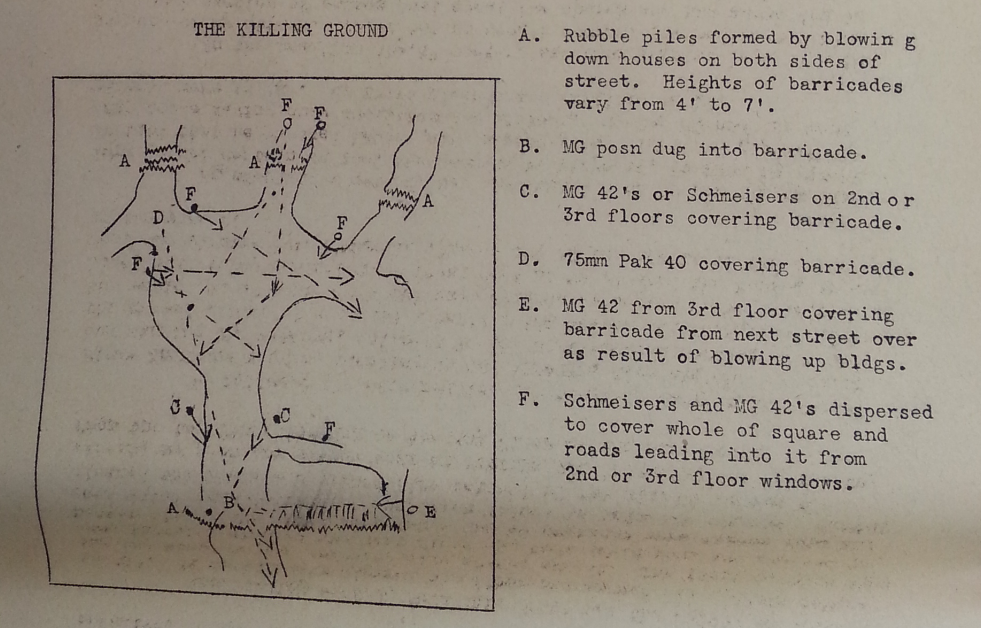 Houses, which were not occupied, were booby trapped or had delayed charges placed in them with timed fuzes. In one instance a complete platoon was blown up in a house shortly after occupying it. Retribution was swift, a house was prepared and a small withdrawal carried out. The resulting explosion accounted for some twenty odd paratroops. Both sides had learned their lesson. [This incident is noted on some other websites, with figures of about 50 Germans killed. This number seems high for one house --Chieftain]. Both sides had learned their lesson.

Another simple, but unnerving trick, was the employment of stick grenades as booby traps. Easily set up, they were most effective in imposing caution, if not casualties upon our troops and were a continual source of annoyance. Time detonators were also used on prepared charges and explosions continued several days after our occupation was completed.

The main tank approaches, naturally limited to streets, were covered by anti-tank guns sited to fire at short range. Some were placed close up to the barricades to catch the tank's exposed underside as it lumbered over the rubble. Other guns were kept mobile and were rapidly shifted from street to street as a counter to our armored threat. A favourite trick was to catch a tank in enfilade as it passed one of the openings to the innumerable narrow alleys which criss-crossed the main streets.

For the most part the guns used were 75mm PaK -- believed to be drawn from the anti-tank regiment of the 90thLight Division to reinforce the paratroops. One 28/20mm Gerlick anti-tank gun, a proper airborne weapon, was captured, as was an obsolete 3.7cm PaK. This latter gun fires a stick bomb propelled by a nitro-cellulose cartridge and was considered quite effective at short ranges. Other anti-tank weapons encountered were the hollow charge magnetic grenade (Hoft Hohllandung), the Blendkorper, a glass, chemical filled grenade, and the Panzerwurfmine. 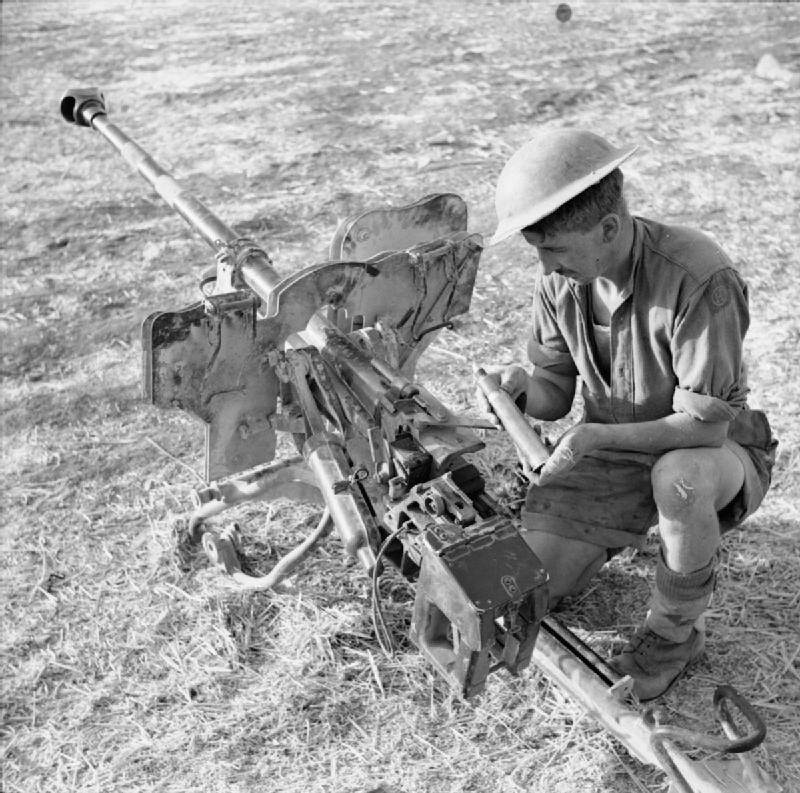 A 28/20 squeeze-bore gun. In this case the /20 indicates the muzzle diameter, not the barrel length.

Another of the most annoying characteristics was his repeated and certain infiltration into weak spots. Numerous times on being driven from strong points he succeeded in re-occupying them owing to our lack of promptness in placing garrisons there. These tactics caused us a great deal of irritation and necessitated our employing a larger number of troops than was necessary for the actual operation. Every building had to be occupied as soon as it was captured and held until the whole immediate area had been cleared.

No proper enemy counter-attack was launched in the town though he infiltrated continuously and twice necessitated our re-clearing a vital part of the town. This failure to counter-attack was typical of 1 Para Division, who, due to their airborne experience and tactical teaching, conserved their reserves carefully. During the latter part of the battle, however, a counter-attack was put in against 1 Cdn Inf Bde, who were doing a flanking movement to the west around the town and it is believed that this comprised the entire divisional reserve. The paratroops fought tenaciously and did not withdraw from a position until all hope of holding it had been lost.

So that's the setup. As a small tactical exercise for yourself, have a think about how you might attempt to overcome such obstacles. We'll come back to this next time to see how the Canadians went about it -- in the meantime, feel free to share your answers on the forum thread.