We in the West have been without a good movie for tankers for quite a long time. As I look at my list of ‘required-watching movies for tankers’, which covers a fair range to include Monty Python and The Holy Grail, when it comes to actual tanks it’s a matter of decades, not years: The Beast, Kelly’s Heroes. The Pentagon Wars.  And the last two aren’t even serious. The scene in A Bridge Too Far where Michael Caine’s Irish Guards punch through the German defensive line is probably one of the best pieces of tank-and-artillery awesomeness  on celluloid, but mainly because we’ve not had much else to begin with. So, like presumably all other tankers, I’ve been keeping an eye on the development of Fury since it was first announced. As a result, when I was invited to swing by the production studio (I guess they heard I like tanks and know a few things about them), it did not take much persuading for me to detour to the UK on the way home from Russia. Since, at E3, we made it public knowledge that we at Wargaming have been having a chat with the Fury lads, now's as good a time as any to let you know what I saw.

The first stop was the storied Pinewood Studios.  It was a hive of activity. I’m told that there were seven films in production right now (and buggered if I can identify the weird vehicle I saw being prepared over in the James Bond stage). I was immediately ushered into the office of Fury’s writer/director David Ayer, and the first thing I see is a terrain model of a field. The second thing I see is another terrain model of a town. Model M4s, halftracks, Panzers and other equipment were scattered throughout the office. There were probably other people in there too but I didn’t really notice beyond the tanks. Truth be told, I was too overwhelmed/enthusiastic to remember to take pictures, or notes. But pictures there were aplenty.  Half the walls were plastered by photographs and reference materials of tanks. The next room over had –all- the walls plastered by photographs and other references of tanks, guns, infantry, and buildings.

It was immediately apparent that Mr Ayer is personally vested in this film as we discuss the project’s background. We start delving into smaller details and he’s keeping up where most normal people I talk to about tanks start to have their eyes glaze over. During a discussion on the differences of the production models of Tiger tanks, he quickly pulls down a copy of Spielberger’s Tiger book and unerringly goes straight to the appropriate page. He’s obviously been doing the research himself. (I also saw Zaloga, Jentz and Fletcher during my quick scan of the bookshelf).

He’s not the only one. One of his senior staff, an Irishman by the name of Owen, was beaming with joy as he opened a new shipment of uniforms and then showed it off to Mr Ayer and myself. Copied directly from the originals, down to the manufacturers’ stamps on the inside linings, apparently the best detailed uniforms ever provided to a war movie. I have to take his word for it, but his enthusiasm seemed genuine enough. In any case, I was certainly not the first tanker to go over the script: There were some details which really only a tanker would know or understand.

After a while, I took my leave of Mr Ayer to let him get back to work, and we went to visit the rest of the staff. Plans and photos for tanks were everywhere. Not just plans, I saw a printout of a LIDAR scan of an M4 turret interior for recreating. (They had to make a fake turret and hull with removable access panels in order to get the camera in, but by Jove, they’re going to get the interior right).

I basically got the VIP tour. Over to one of the prop areas, where I saw a huge collection of crates, jerrycans, tyres.. Just like a real war, really, far more support assets than weapons. I saw a Kubelwagen being prepared, and a German field kitchen being built from the raw wood. I am astonished by the level of effort being undertaken at that stage and yet to be done considering that filming was starting the following month. But that was just the start.

The next stop, after lunch in the fascinating Pinewood mess, was the –other- production studio, over at Longcross. Building a field kitchen is nothing. 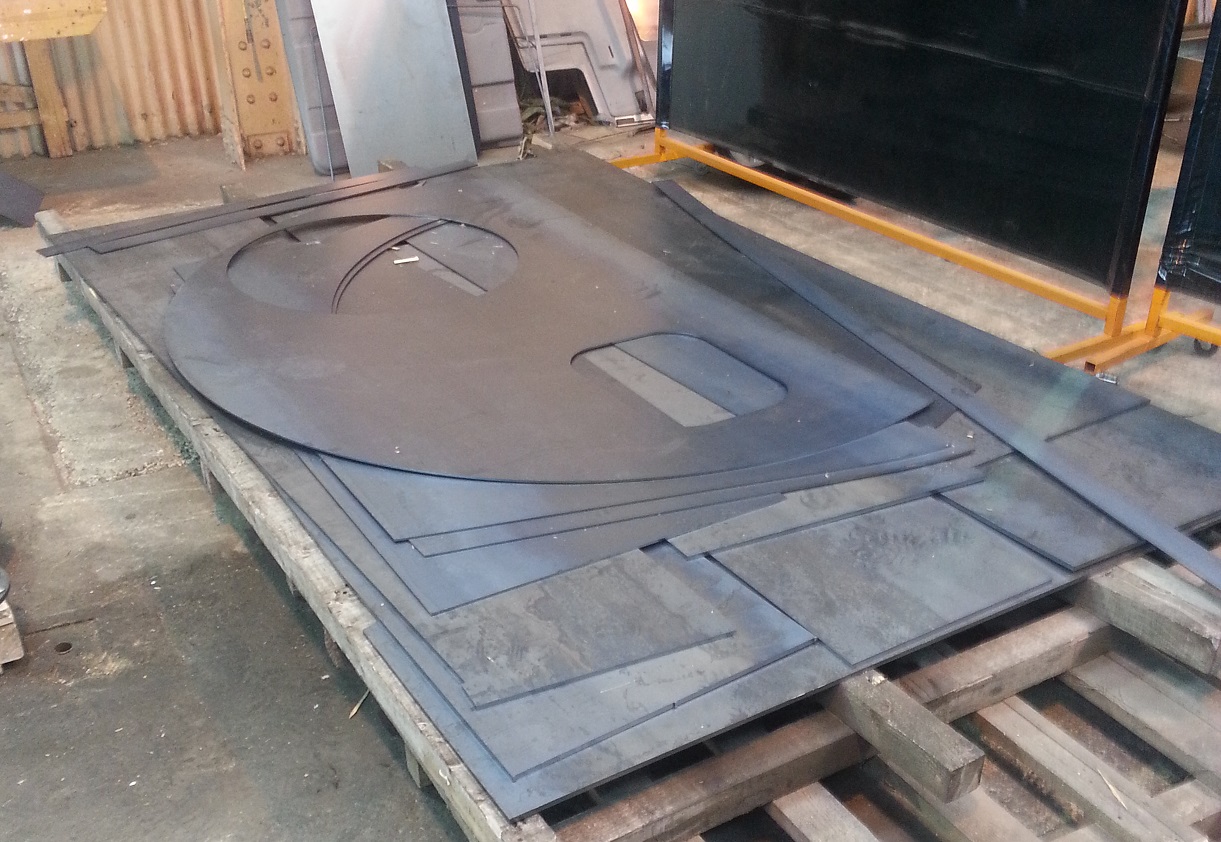 Amongst the tanks used in making the film, they used Tiger 131, but for some reason, Bovington won’t let them blow it up. So they made one. Or, actually, since this chap’s working on a second turret, apparently more than one. 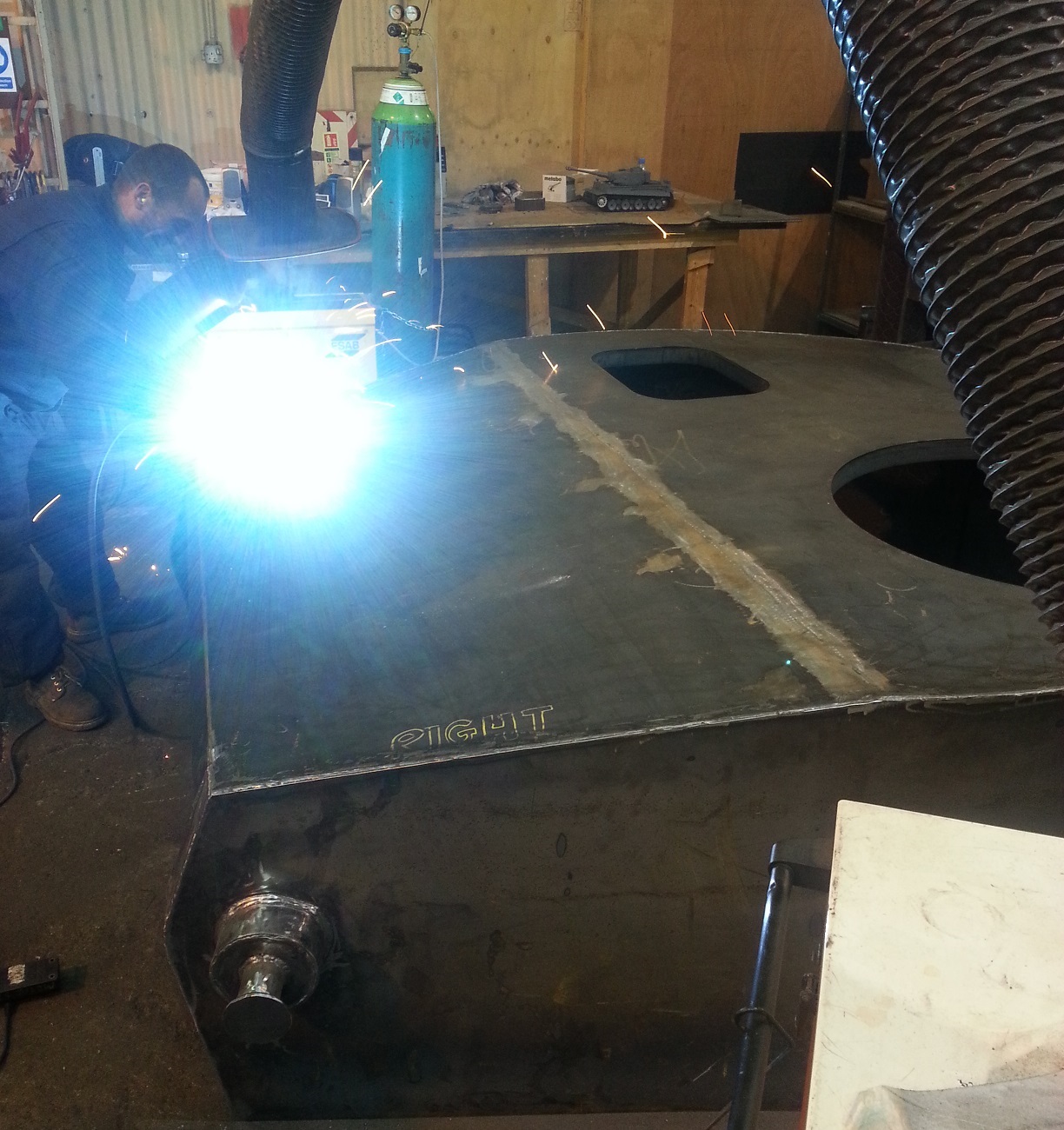 Now, here’s the really cool bit. Longcross used to be the local version of the US’s Aberdeen Proving Ground. The suspension test track and gradient tracks are still on the movie studio’s grounds. A large, round glass building marks where Chieftain tank turrets were tested. And these “Tigers” will not be the first ones there. 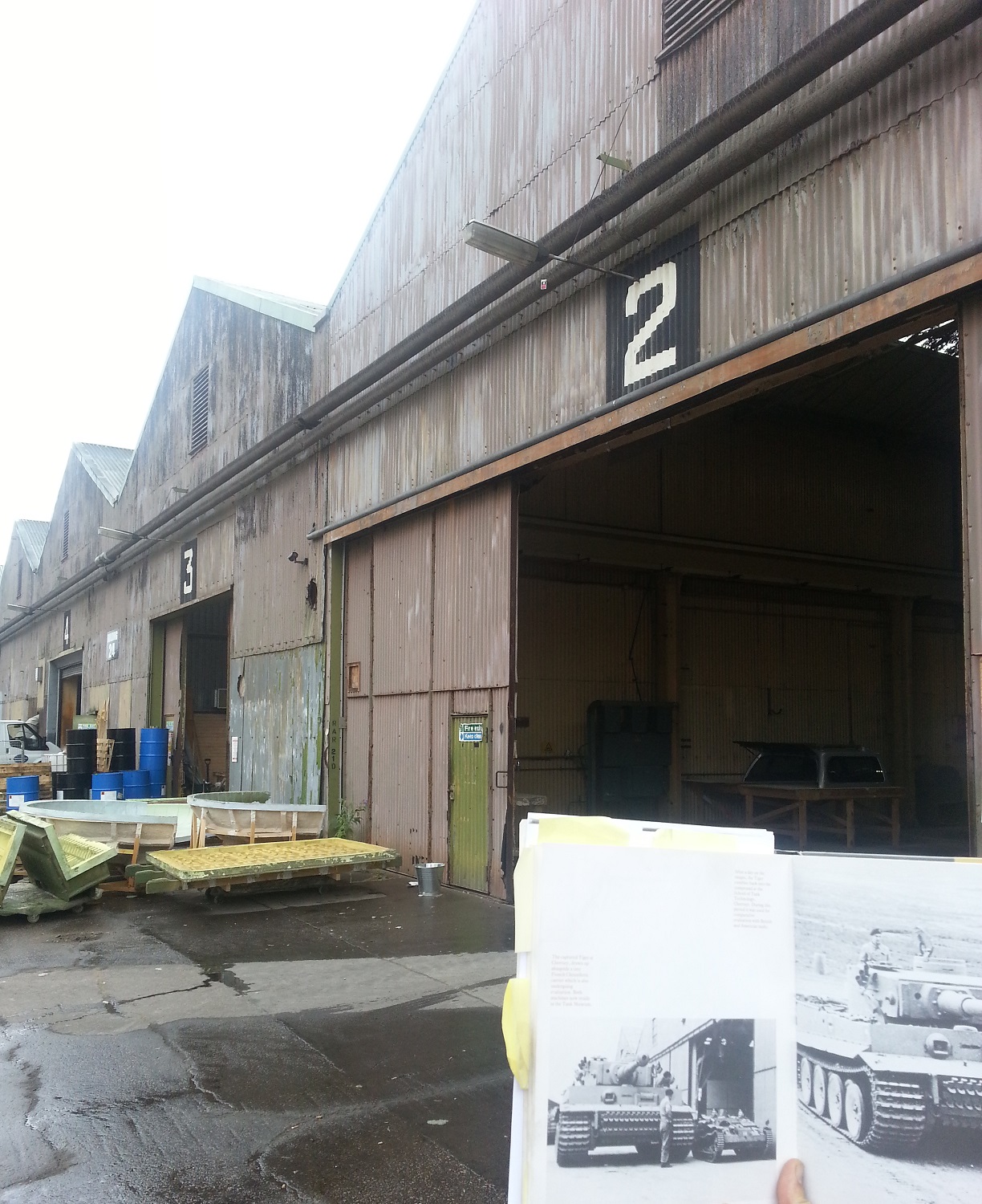 That’s Tiger 131 in the photograph in the book (The exploitation report of Tiger from WWII). Note the similarity of the building in the background of the book and the actual building. Yep, they built the Tigers in the exact same building in which Tiger 131 was evaluated almost exactly 70 years ago. How awesome is that? Gets two thumbs up from Owen and myself. 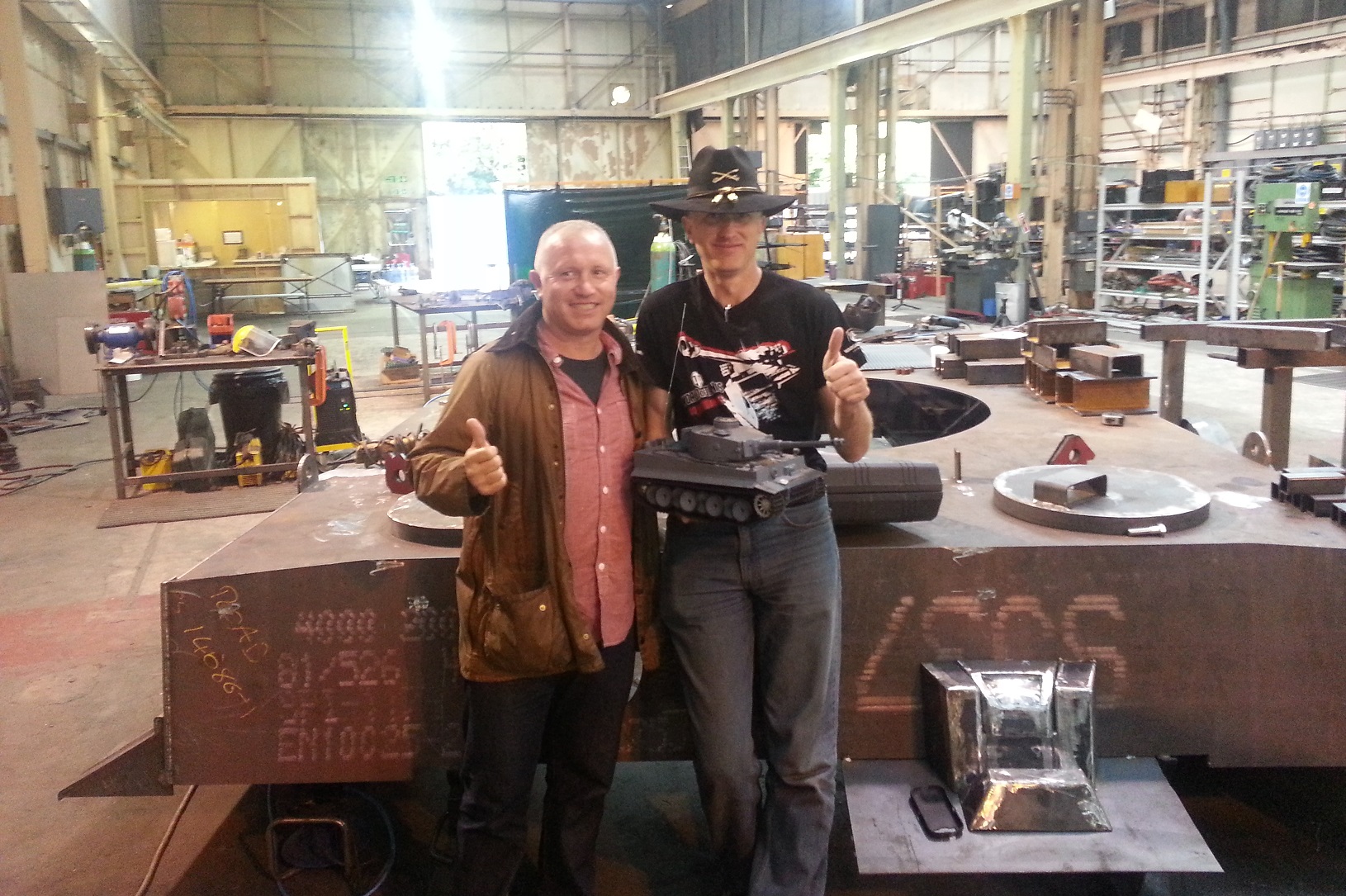 Sadly, my photo of the chap they have in charge of this endeavor didn’t come out, but this isn’t his first crack at tank-building for the movies.

But wait, there’s more. I suspect at least one M4 in the movie is going to meet an unfortunate end. 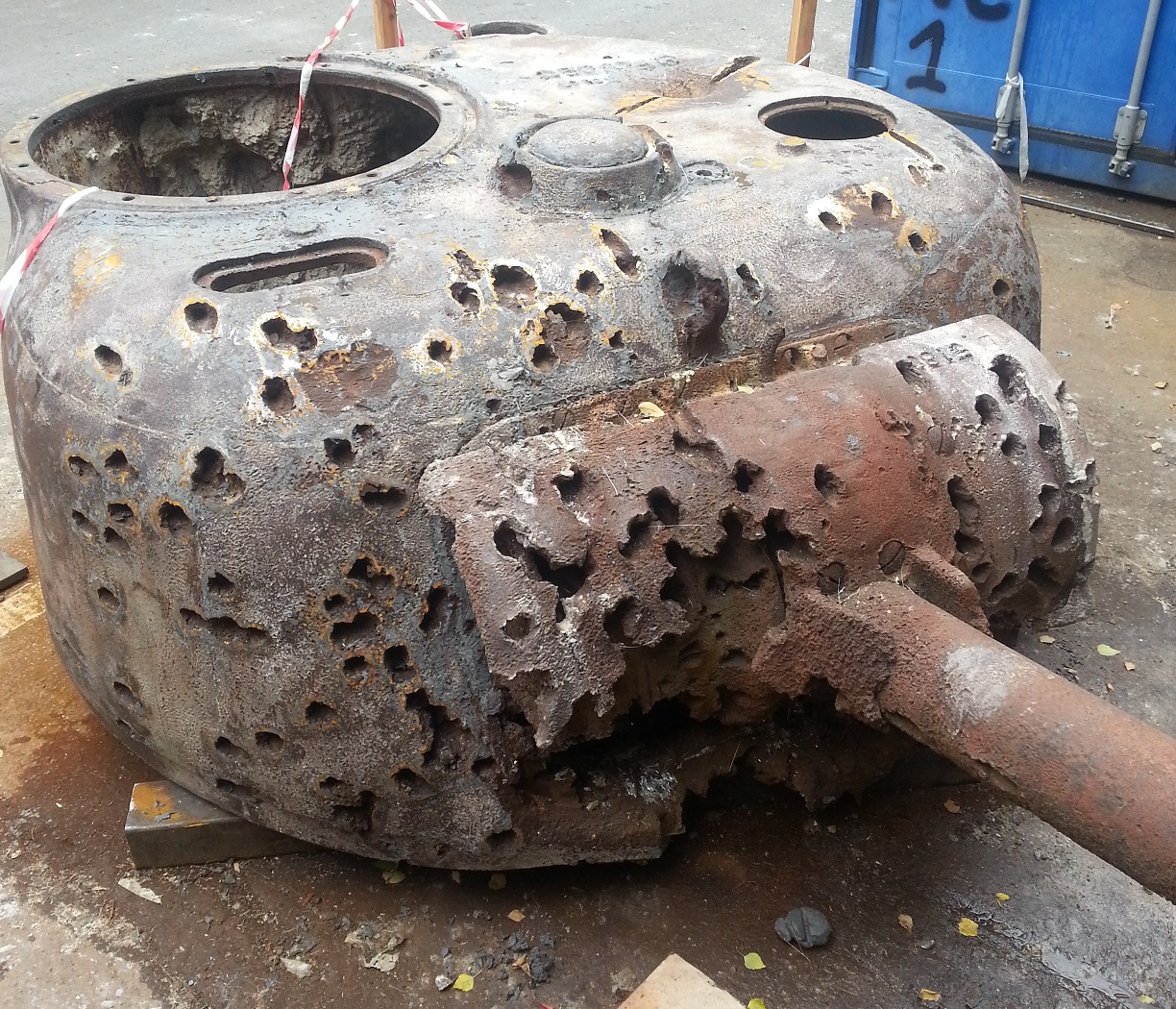 Ignore the dummies on this one. The photo is taken behind armoured glass in an observation deck in one of the buildings. 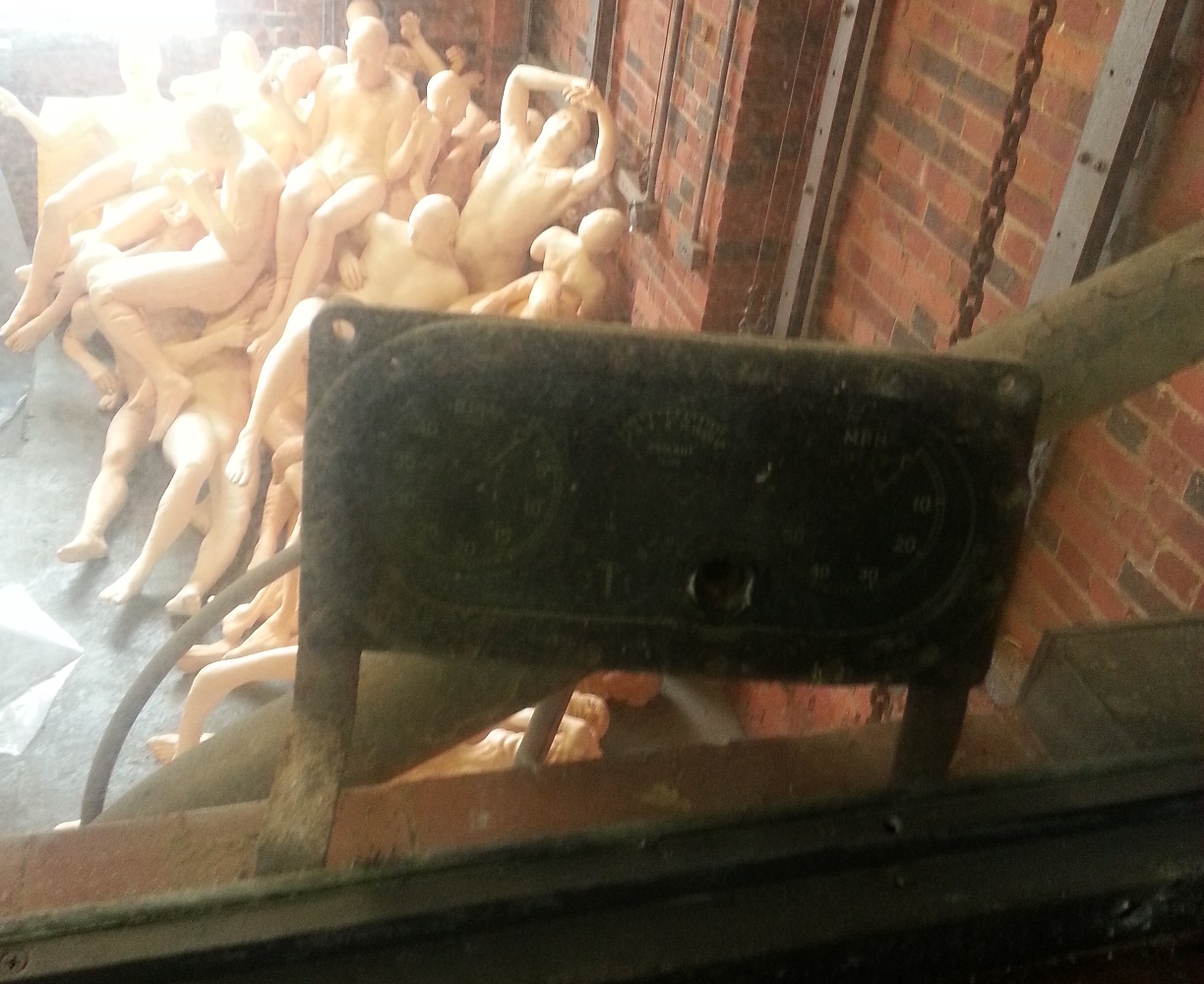 The instrument panel indicates that this was part of an engine testing facility. The armoured glass was because these engines could be tested to destruction, and the MoD apparently didn’t want its engineers killed by pieces of exploding engine flying around. Awfully considerate of them. Incidentally, nearby road signs indicate that Chobham is almost the next town over, another important place in the annals of tank development. The serendipity of this location for filming is just too great.

I’ll just finish on this one. Mr Ayer claimed his favourite movie to be Apocalypse Now, so he was most willing to end this article with his channeling LTC Kilgore by posing wearing The Awesome Hat of Awesomeness. 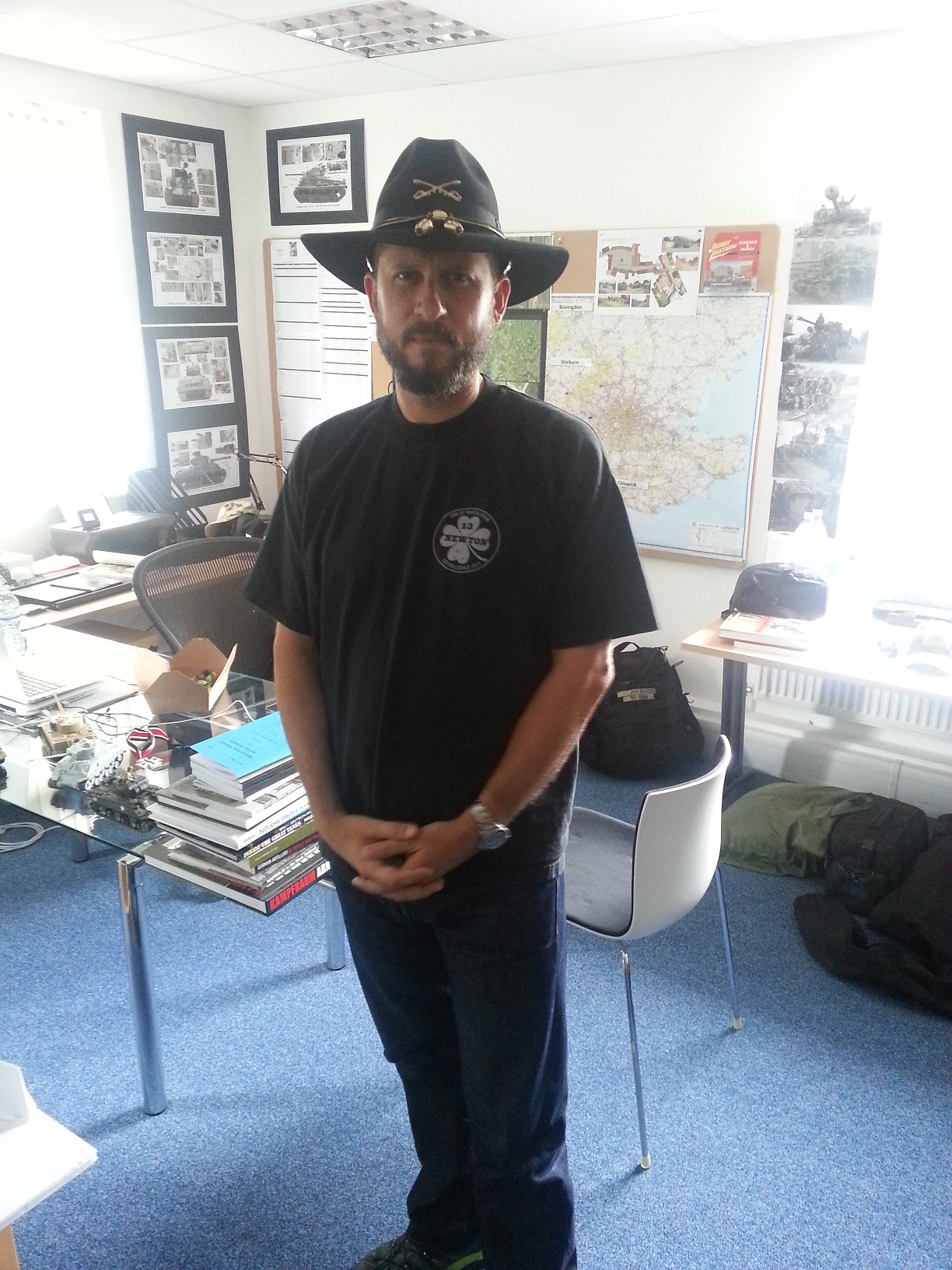 I have to say, I’ve been very impressed by the scope of effort and passion I saw evident in this production amongst the entire staff (Of course, it’s not as if I have any other movie background to compare against!) and I am definitely looking forward to seeing how this progresses and what the final product will look like.

My extreme gratitude particularly to Messers Alex Ott (Co-Producer) and Owen Thornton (Associate Producer) for taking the time out of their day to show me around, and to Mr Ayer and the rest of the Fury staff for making me as welcome as they did. It was a fascinating visit.