The Chieftain's Hatch: US Firefly Pt. 1

There are various stories going around about how the US Army was foolish for not either buying 17pr guns from the British to implement into their M4s, or if British and Canadian production wasn’t up to it, simply building the guns themselves. However, almost all the documentation on the matter is either speculative or unscientific. It seems to be rather difficult to find an honest, objective assessment of the various options of tank armament to replace the 75mm. The commonly referred to tests conducted in Europe in the Summer of 1944 (See US Guns German Armor Part 1) were generally not very scientific “Let’s lob a few rounds at these Panthers we found and see what happens” type tests, and almost entirely focused on penetration characteristics which generally resulted in “17 pr may be somewhat better, but there is no practical achievement from that better” (i.e couldn’t reliably kill a Panther from the front any more than anything else)

Of course, there is far more to a proper, thorough test of a weapon system  than field tests, and those tests are conducted at proving grounds. A review of such a more comprehensive series of tests may at least provide some understanding of US Army thinking on the matter, and if the US Army’s testing was valid, may allow one to consider the commonly heard refrain that Firefly Sherman was Best Sherman during the war.

A Firefly turret was made available to the United States Ordnance Department during the winter of 1943-44 and was tested at the Aberdeen Proving Ground against the 90mm Gun, M3, which at that time was emerging at the armament for Gun Motor Carriage M36, and was later to be mounted on Heavy Tank, T26E1 (the predecessor of Medium Tank, M26). As a result of these trials, the 17-pounder gun was considered by the Ordnance Department to be generally inferior to the 90mm gun.

Of course, that’s not entirely a fair test. The 90mm gun was being put into use as a tank destroyer, and in the next generation tank. But Firefly was being made to put the gun into the current generation tank.  As a result, more testing would be required to find out just how good a solution it would be for Sherman compared to the route chosen by US Army Ordnance. It was also only a test by the Ordnance folks, not the end users. Shortly after the war ended Army Ground Forces instructed that such a test take place, although supply issues (not least the delivery of several hundred rounds of British ammunition) resulted in the testing in Fort Knox by Armored Force and Tank Destroyer Board not being complete and written up until August of 1946. By this stage, of course, there was no longer any question of if the Firefly should be considered as a useful variant of M4 for acquisition; these were to be tests more focused on design features and its utility as an overall system to determine future tank design philosophy. 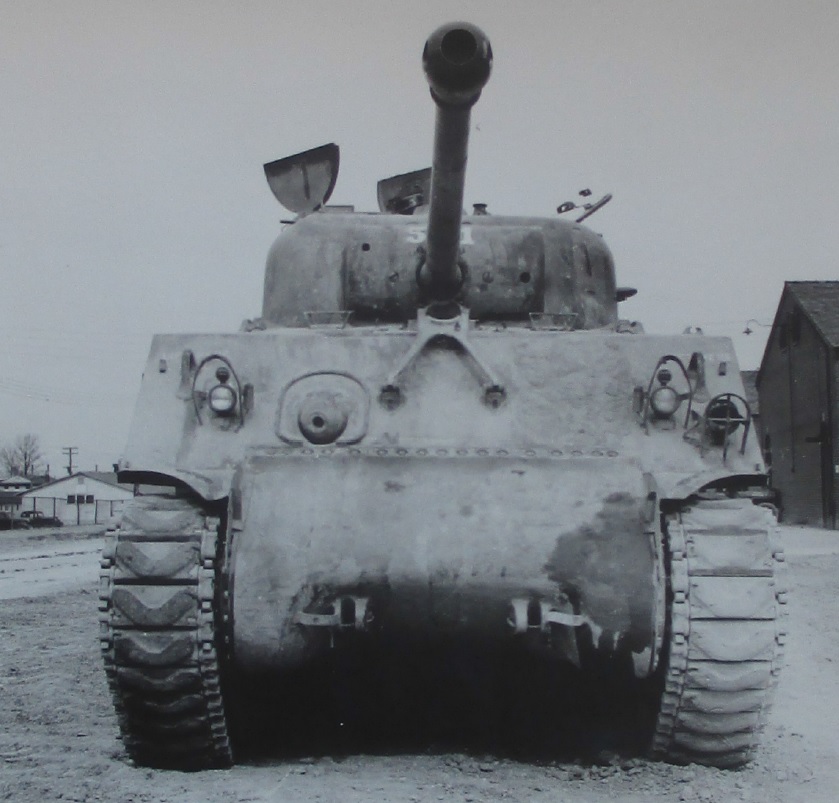 The vehicle as tested was the installation of the imported M4 17pr MkVII turret onto a standard M4A3 VVSS hull, so not a true Firefly conversion, but issues such as hull stowage were not really part of the tests and the merits of keeping the fifth crewman and bow gun were not debated. Three tank configurations were compared: The Firefly turret was compared with the M4(76) and M26.

The installations were comparatively rated on 21 characteristics. (If you are surprised by this number, ask yourself why. You think there isn’t something more to a tank gun than simply how accurate it is, how fast it shoots, and how much damage it does on the other end?) The report is quite long, so we’ll cover some of them in this article, and the rest over the next couple of weeks.

Without further ado, let’s go through the tests in the sequence as they appear. 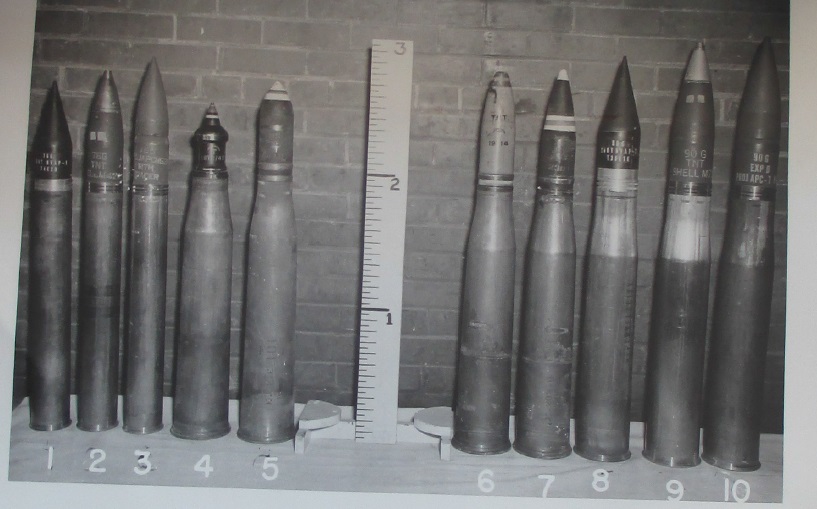 The problem of course is that handling the round isn’t the only issue. As the report stated:

“Loading must be considered from the standpoint not only of weight and length of the round, but also loader’s working space. This space in the 17-pounder gun turret is particularly restricted, inasmuch as the loader must guide the projectile into the cutaway portion of the breech ring by movement in a horizontal plane in order for the base of the round to clear the rear of the recoil guard. In medium tank M26, the loader not being restricted by the recoil guard, is able to approach the breech with more latitude.[…] The advantage in weight and length of round of 17-pounder ammunition about equals the advantage of better working space in the 90mm gun turret, it is therefore concluded that ease of loading is substantially the same for both. In Medium Tank M4A3 with 76mm Gun M1A2, the advantage in weight and length of round, together with ample working space for the loader make ease of loading superior to the other two tanks” 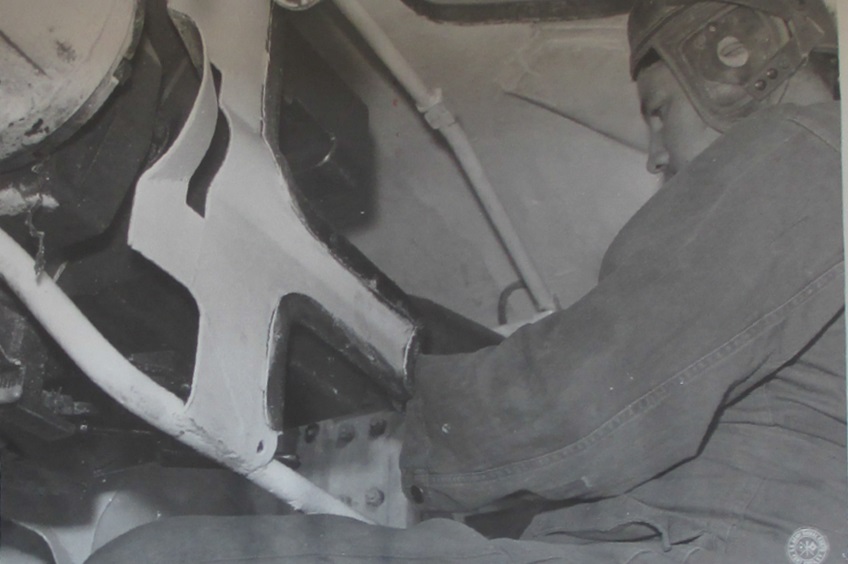 After trying a few loaders out, with times varying from 1.1 seconds (standing, round in hand) to 3.2 seconds (standing, round on floor) to get an average and to find the best loader, they tried for a ‘mad minute’. The crew were able to fire 8 rounds in 44 seconds.  The report notes, however, that “The 17-pounder gun rate of ten rounds per minute, computed from the actual firing of 8 rounds in 44 seconds, should be qualified by the understanding that this was done by a man of exceptional skill and that for the average man the rate will be nearer to 8 rounds per minute”. It also points out that as the Sherman VC ready rack only holds five rounds, such a rate is also unlikely. Further, it was also considered to be faster than the TC and gunner could sense and correct rounds at ranges under 2,000 yards. The 90mm was rated at 8rpm, (with ten ready rounds), and the M4(76) at 20rpm, although with only 6 ready rounds. 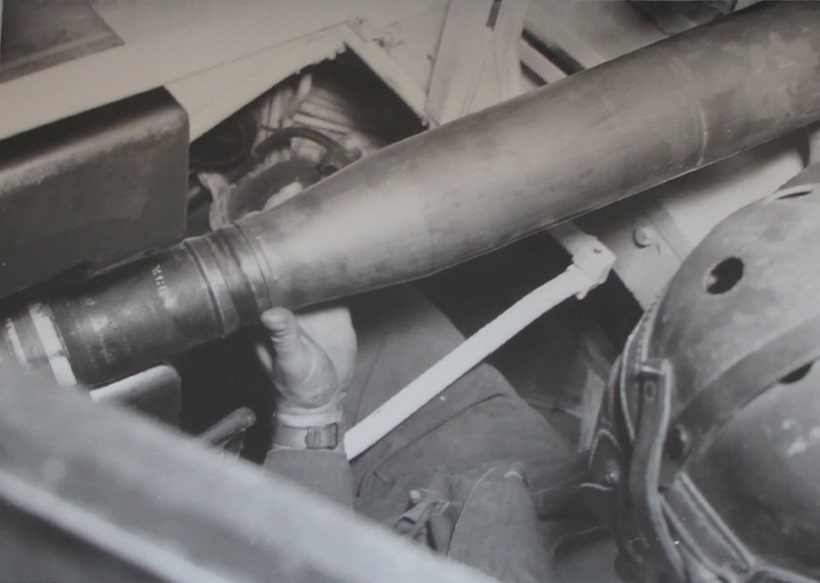 Certainly a tight fit between the recoil guard, turret ring and back wall.

The purpose of this test was “to test the dispersion of various types of 17-pounder ammunition at ranges from 500 to 2,000 yards, and to compare the result with similar data computed from 76mm and 90mm ammunition"

This was done by setting up 6’x6’ canvas panels at 500 yard intervals, and firing ten-round groups at them. 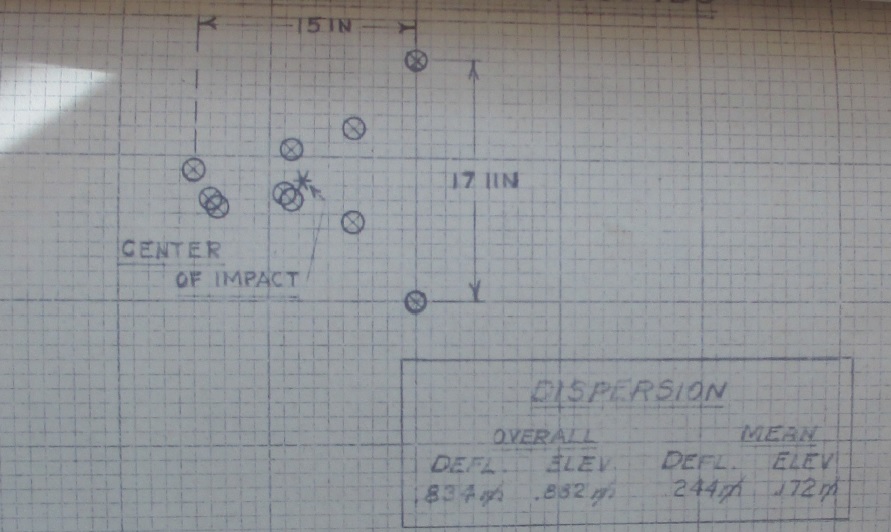 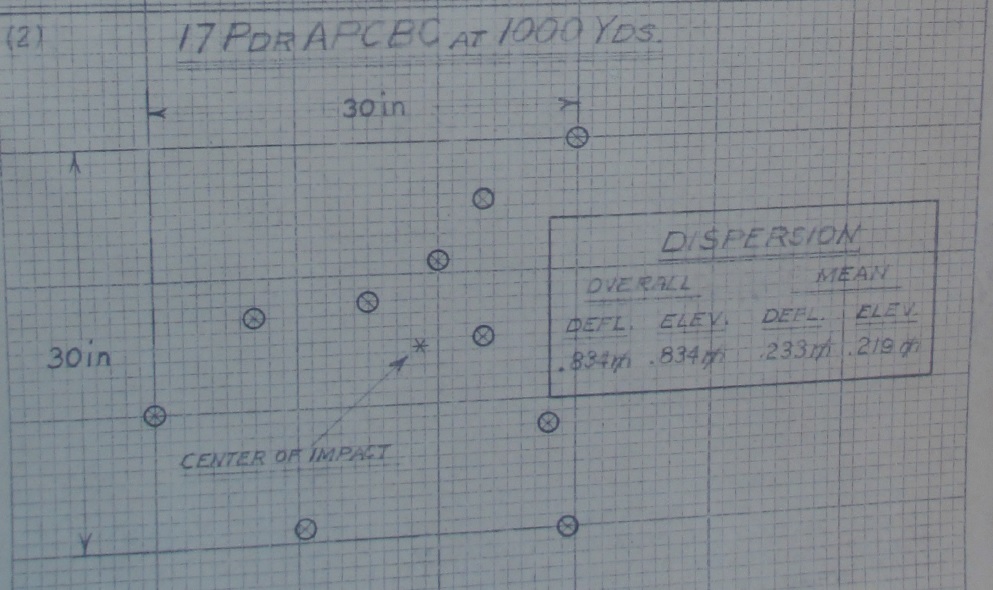 This successfully completed, they went back to the 500 yard target and fired SVDS.

Results were rated "poor", with 8 rounds on target, and two sensed as being about 36” below the panel, but for the purposes of calculation they were presumed to have the same average deflection as the 8 rounds that were on target. Overall deflection was 2.35mil, 4.34mil elevation, with means of 0.5mil and 0.92mil respectively.

Then they tried at 1,000 yards. After firing 18 rounds trying to register, (Successive rounds with the same sight picture were observed as over, left, short)  they decided to abandon further testing of the round except for armour penetration.

After firing the 28 rounds SVDS, they decided to go back to APCBC. However, the SVDS rounds had left duralumin fouling in the gun tube, and so before resuming the dispersion testing at range, they fired ten rounds of HE and then ten rounds of APCBC through the tube for the obscuration tests to clean it out. Given the observed results of the grouping (see “Phase B, below), they went back and fired another ten rounds of HE and APCBC. After the 40 rounds had been fired (Phase D), it was considered that the tube had returned to normal, (albeit at apparently a new zero) and the accuracy testing continued at 1,500 yards after an adjustment on the sights on a clean zero panel. 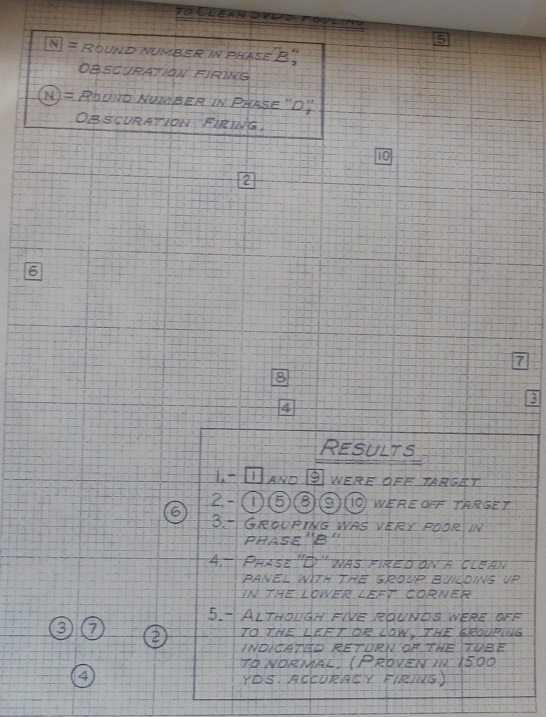 Figures for 1,500 yards and 2,000 yards were as follows. It is interesting to note that the size of the shot group was, in real terms, about the same as that at 1,000 yards, with a substantial increase at 2,000 yards. No explanation for this is offered in the report (It just reports test reports, not theories!), but the obvious thought from my unitiated mind is an oscillating trajectory caused by an unstable round which happens to have a wavelength which 'zeros' at about 1,500 yards. Of course, this is speculation on my part. 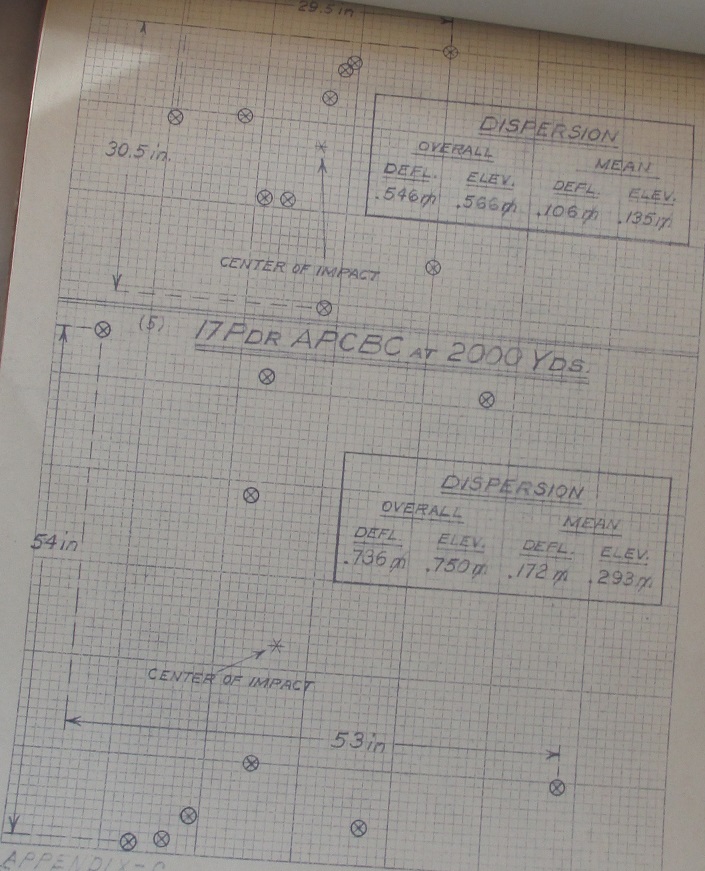 So, the average at all ranges was calculated to be 7.38mil/7.58mil overall, and means of .189mil and .205mil. The testing complete, they then dug into the records to find the test results of 90mm and 76mm guns. 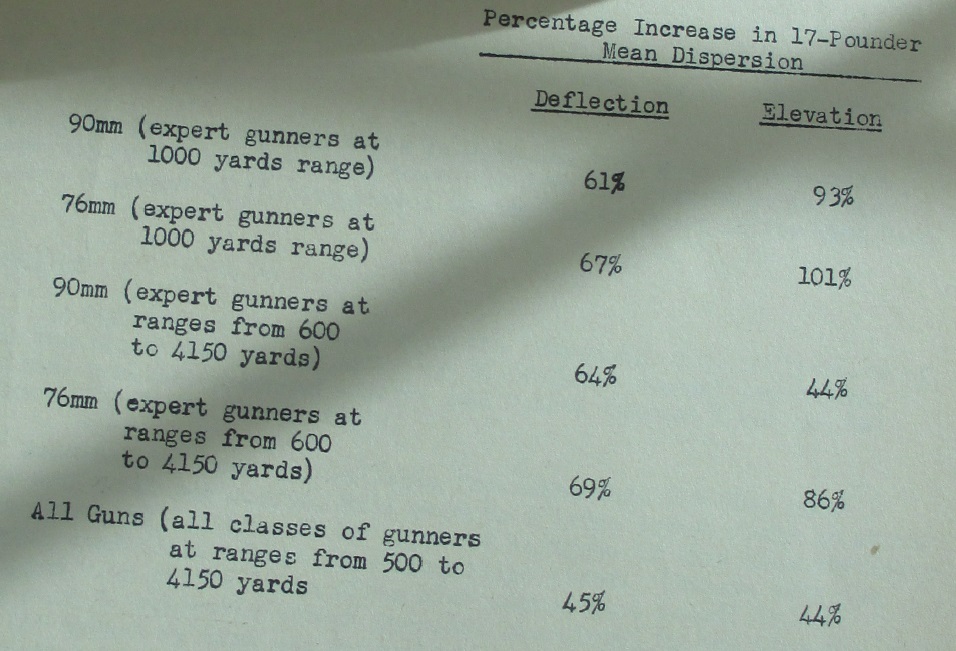 That's plenty for part 1, so we'll return to these tests at a future point.