Some time ago, I put out Army Ground Force’s philosophy behind how it decided what equipment it needed to be built, procured, and sent overseas. That was a more general view.

I’m now going to delve down a little bit, with a series of articles about the AGF’s position and influence on tanks in particular.

So, I go back to AGF’s historian, as he focuses on the heavy tank program. (At the time AGF was founded, remember, Sherman was already in production, so any further developments related to Pershing and bigger). Again, this is the truth as far as AGF saw it.

When Army Ground Forces was established, many of the basic decisions for the tank program had already been made by other agencies of the War Department and the Ordnance Department. At this time, the Armored Force was a semi-autonomous command which played an important part in developing its equipment. Although it came nominally under the control of Army Ground Forces, it continued to exercise many of its powers by direct contact with the Tank Automotive Center in Detroit.

The M3 medium tank was in current use, the M4 medium tank was in production but had yet to see a battlefield. Development of the Medium Tank M7 was also well under way. This had been conceived in 1941 as a 16-ton vehicle, mounting a 37mm gun, and was classified as a light tank. Successive changes requested by the Armored Force had resulted in a tank of 25 tons, mounting a 75mm gun, which thus approached the weight class of the M4 (33 tons) and was reclassified as a medium tank. During 1942 Armored Force enthusiasm for the M7 tank was quite pronounced.

All of these tanks had been developed primarily for the purpose of exploiting break-throughs and conducting operations in the traditional cavalry manner. First of all, their sponsors wanted speed and mobility, with mechanical reliability a necessary corollary. Sufficient fire power was only needed to subdue enemy infantry and minor strong points, and armor was required only to withstand enemy small arms. These tanks had narrow, high-speed treads. Unit ground pressure was not a serious factor because it was contemplated that slashing tank tactics then advocated would not be possible through soft, marshy terrain. [Chieftain’s Note: As you will recall, Armored Force, not AGF, are the folks who created tank doctrine and tank manuals, we’ve gone over in the past the position of Devers and AF on the matter of what they expected medium tanks to do against tanks. That AGF had this interpretation need not be an accurate reflection of what AF thought]

The ascendancy of this concept of tank employment had been supported by the phenomenal success of German armor in Poland, Belgium and France, where it ran rampant through the enemy lines of communication, and operated over dry, favorable terrain with little fear of encountering enemy armor or dangerous anti-tank guns.

Although these principles had guided the tank development program, they were not accorded universal support. There were those, for example, who favored tanks designed primarily to support the infantry advance directly by providing additional shock and firepower. This was a doctrine in the tradition of World War I. It called for tanks with lower ground pressure, heavier armor and fire power sufficient to overcome enemy pillboxes and fortifications. Some speed and maneuverability could be sacrificed to achieve these characteristics.

Although emphasis had been placed on the development of medium tanks M3, M4 and M7, Ordnance at the same time had produced a heavy tank weighing about 60 tons and mounting a 3-inch gun. Several variations of this tank were developed. One employed an radial air-cooled engine and a torque converter fluid drive, with mechanical transmission added. Armor was from 3-3 ½ inches thick, and included armored skirts to protect the suspension. This was standardized as the Heavy Tank M6 in February 1942. Another version, the T1E1, incorporated a new electric drive by which each track was independently operated through an electric traction motor. The tracks could be reversed independently so that the tank was able to turn in its own length.

Initial tests of these vehicles during 1942 indicated that they were mechanically unreliable and that the fire power of the 3-inch gun and armor protection afforded did not justify a vehicle of such tremendous weight. At the time, tank warfare was restricted to North Africa and Russia, and it was believed that the speed and mobility of the medium tanks were greater assets than the heavier armor of the M6. By the end of the year, the War Department decided to provide for only one heavy tank company and authorized production of only forty of these tanks.

Tests of both the M6 heavy tank and the T1E1 heavy tank were continued by the Armored Board and the initial conclusion of Army Ground Forces was entirely supported by evidence from these tests. The M6 proved to be entirely unsatisfactory. The T1E1 was dropped from consideration, even before being thoroughly tested, because of its excessive maintenance requirements [Chieftain’s note: The parallel with the contemporary German program, the VK 45.01 (P) (Porsche Tiger) is noteworthy]. Indeed, the Board was unable to keep it in operation long enough to provide a suitable test. Furthermore, except for the electric drive, it was identical with the M6 which had been found unsatisfactory on a number of other counts.

The British, unlike US tank officers, desired heavier armor in medium tanks, and Aberdeen Proving Ground started design studies on an improved medium tank in the fall of 1941. They proposed a tank carrying four inches of armor, and using a 24-inch track (Would would give a unit ground pressure of 10lbs with a 45-ton weight). The armament was to be the 75mm gun used in the M4 tank. This tank (denoted the T14 assault tank) was intended only for possible use by the British.

In the fall of 1942, the Ordnance Department started development of the T20, which would conform more closely to American tactical doctrine. This tank was to weigh approximately 30 tons, would carry 4-inch armor, and operate at 35 miles an hour. It was contemplated using a new horizontal volute suspension in this tank and a box-type hull which would provide a lower silhouette than the sponson type hull used in the M4. Six pilots were to be made, two with the new 76mm gun, two with an automatic 75mm cannon, and two with the standard 3-inch gun. The transmission would be similar to that used in the M6 tank. Power was to be supplied by the new 500-horsepower Ford V8 engine, used also in the M4A3 medium and T14 assault tanks. Shortly thereafter the program was expanded to include the same types of tanks provided with mechanical transmissions (T22) and electric drive (T23).

At the request of Armored Force it was decided to provide one model of the T20 series with torsion bar suspension, which had been developed by the Ordnance Department at the insistence of the Armored Force, and appeared to give greater promise than the conventional volute suspension. This tank was designated T20E3. None of these tanks except the T23 series was destined to be given any real consideration by Army Ground Forces. 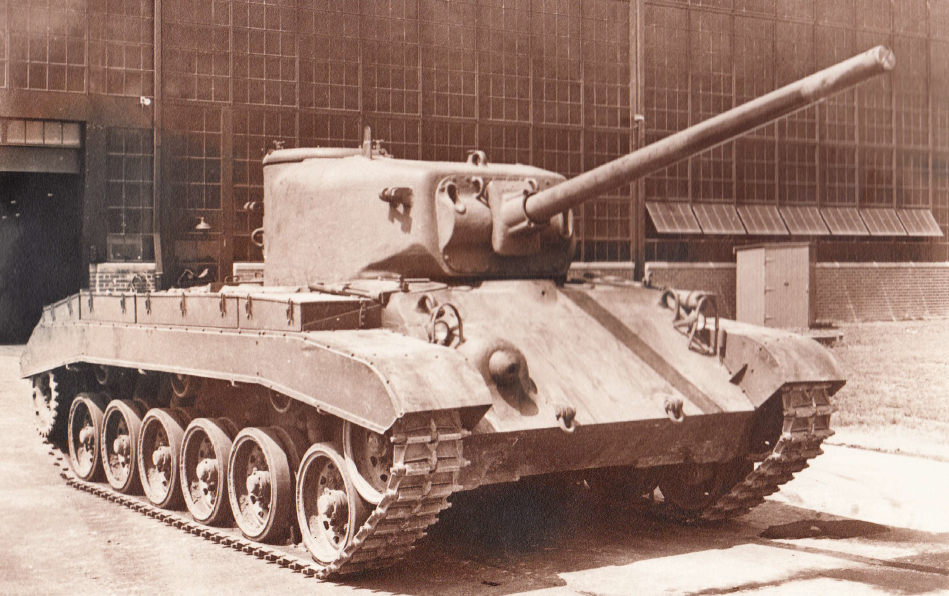 The T23 incorporated an electric drive. The gasoline motor was connected to an electric generator which provided current to operate traction motors connected to the final drive sprockets. Unlike the M3 and M4 all of the T20 series were rear-drive tanks. A system of hand controls enabled the driver to operate each track independently through infinite speed variations. Independent operation of the tracks gave the vehicle a great deal of flexibility. The electric drive installation, however, added approximately 3,800 pounds to the weight of the tank.

The first hand-made pilot model of the T23 was exhibited to high-ranking officers, including Generals Marshall, McNair, Somervell and Devers (then commanding Armored Force) in April of 1943. The exhibition was not in the nature of a service test, but strictly a demonstration. The observers were very much impressed with the flexibility of this tank.

The Ordnance Department was enthusiastic in its praise and intimated that the tank was ready for quantity production. This in spite of the fact that the tank had not been service tested and that the hand-made model would not be completely representative of mass production. It was informally agreed at that time (without test) to procure 250 of these vehicles. A second piloit model was to be made and sent to the Armored Board for test.

One necessary change was agreed by Ordnance. The first model, instead of carrying a horizontal volute suspension as originally planned, had been supplied with the vertical volute suspension of the M4 tank. The horizontal volute springs were not yet in production, and Ordnance had believed it desireable to complete the pilot model of the T23 without incorporation of the preferred suspension. It was agreed that a development model should be made with torision bar suspension (to be designated the T23E3). 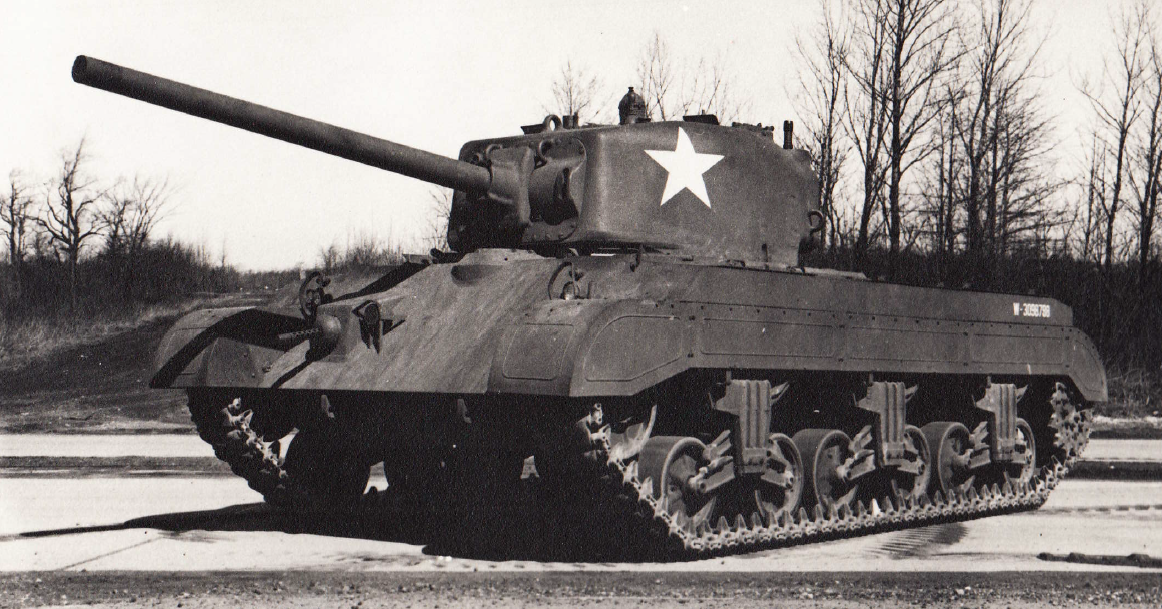 Initial enthusiasm for the T23 could have been due, in part, to the failure of the M7 medium tank during tests in 1943. It was found that the power train of the M7 was incapable of providing the requisite cross-country mobility, and although improvements were incorporated, the tank was never approved for combat use. It was made limited standard in July 1943 and declared obsolete in December.

At the same time, the using arms desired development of this type of vehicle to continue with heavier armor and a 90mm gun. Two types were contemplated. One with slightly heavier armor than the T23 would weigh 36 tons and carry a 90mm gun. This was the T25 tank, forty were authorized. The T26 tank, weighing 40 tons and carrying a 90mm gun, was to carry armor equivalent to that of the new German Panther and Tiger tanks which had appeared on the battlefield the previous fall. Ten T26s were to be made. All of these tanks would use torsion bar suspension, the T25 with 19-inch tracks and the T26 with 24-inch tracks.

The initial report of the Armored Board on the T23 tank was extremely disappointing. Numerous defects were uncovered, the principal ones being an inadequate cooling system, excessive maintenance required by the electric drive, high unit ground pressure caused by the additional weight of the electric drive mechanism, poor stowage arrangements, and a host of minor deficiencies, all of which prevented the tank from being battleworthy.

The failure of the electric drive in the T23 tank and the already high ground pressure in the T25 and T26 indicated to Army Ground Forces the desireability of using a torquematic transmission in the latter tanks. This transmission system utilized a fluid torque converter and a planetary transmission with manual gear selection. These tanks were informally redesignated the T25E1 and T26E1.

I’m going to break here for a bit, before coming back more in detail for the events of late ‘43/early ’44, particularly with reference to Pershing.

Bob's on vacation, so click on the following link.

As ever, my Facebook page remains here, my Youtube channel here, and Twitch stream (Every Tuesday, and (very) occasional evenings) is here.