On 15 August of 1945, a survey was sent from the European Theater of just how well various pieces of equipment were received, what their problems were, and so on. Now, I’m not going to go into it in particular depth. For example, apparently a common problem on the M8 armored car was that the base of the oil filter tended to work loose due to vibration, and this was noted in Ordnance Technical Bulletin #118 of 7 Dec 1944. Or M4/M4A1 tanks came with an oil tank bayonet gauge improperly graduated for the oil tank capacity (See Ordnance Technical Bulletin of 31 May 1943 for the procedure for correcting the graduation). Of critical importance, the telescope, M76F for the M36 GMC was 0.047” too wide to fit into its stowage box.

I mean, I guess it’s nice to know the information is there, but instead, I’m going to give you the high points. Some of the more noteworthy or remarkable observations have been extracted as 'Chieftain's Picks'. I can’t figure out if there was a method to the sequencing, but here we go, in order. Chieftain provided for scale.

Yes, they were all lumped together in one report.

General: The half track vehicle, comprising personnel carriers, ambulances and gun carriages, performed very well throughout the theater. Few complaints were received on items other than poor maneuverability, and failure of track and suspension.

Track, Rubber: Track replacement was excessively high, due to rubber being worn off and the cable stretching of breaking. It is recommended that a new type track utilizing replaceable blocks be developed, so that block replacement can be accomplished without it being necessary to replace the entire track assembly.

Oil Seal, Bogie Roller: The bearings in the bogie rollers failed when operated for short periods in mud. Investigation revealed that sediment had worked in past the oil seals. It is recommended that a plate be installed on both ends of the hub to prevent foreign matter coming in actual contact with the oil seal, insforar as possible.

Roller, Bogie: Bogie roller replacement was very high, averaging one wheel per vehicle per month. The tire would separate from the rim, usually from the heat generated on road marches. It is recommended that the track and suspension system be redesigned for satisfactory performance over hard surfaced roads in poor state of repair at high vehicle speeds. [Chieftain: One wheel a month is ‘very high’?]

Steering Assembly: Hard steering was a general complaint from all operators. The vehicle was particularly hard to maneuver in small spaces such as narrow streets or wooded areas. [Chieftain: Power steering? What’s that?] 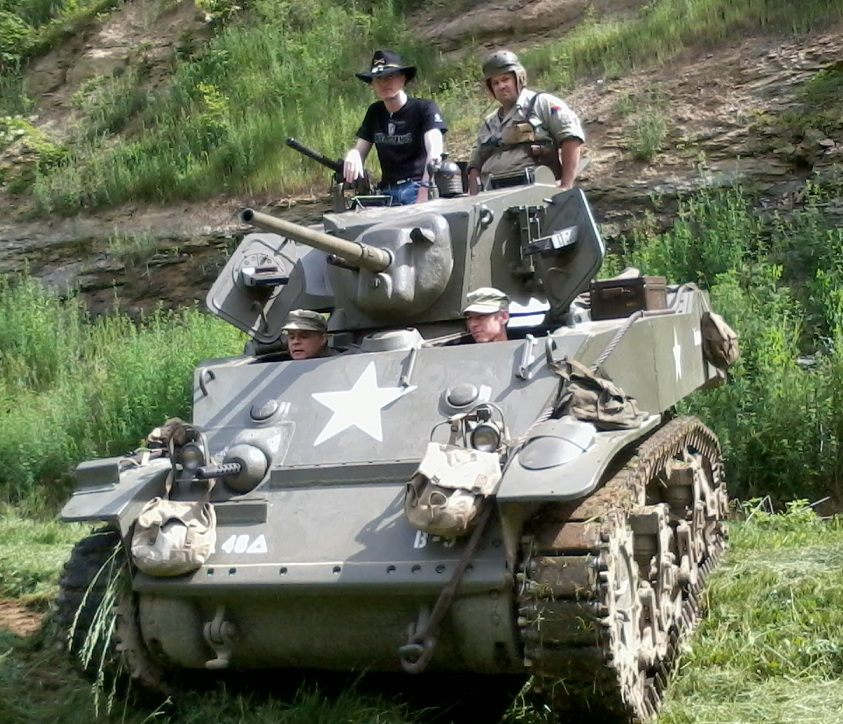 Fuel System. Many tanks received in this theater contained heavy gummy deposits in the fuel system, intake manifold and on valve stems. It was necessary to disassemble and mechanically clean the fuel lines, fuel filters, fuel pumps, carburetors, intake manifolds and valves before the vehicle could be put into service. It is recommended that necessary action be taken by ports of embarkation to run out engines prior to preparation for overseas shipment on treated gasoline of low gum content. [Chieftain: So it wasn’t just the British that had to deal with tanks delivered off the ships. On a related note, some vehicles suffered with transmission overheating: Turned out that they contained preservative oil instead of engine oil. Ooops.]

Hull floor. A high percentage of light tanks were disabled by mines. In all cases it was observed that the hull base plate was strong enough to withstand penetration. However, the weld seam between the front stationary axle and the front of the tank at the junction of the base plate and side plate appeared to be pushed inwards, permitting the blast wave to enter the driver’s and assistant driver’s compartment. This condition resulted in serious and very often fatal wounds. A letter dated 8 March 1945, subject “Hull, Base Plate Modification, Tank, Light, M5 and M5A1” was sent to the Chief of Ordnance recommendation that a field-expedient modification be developed. 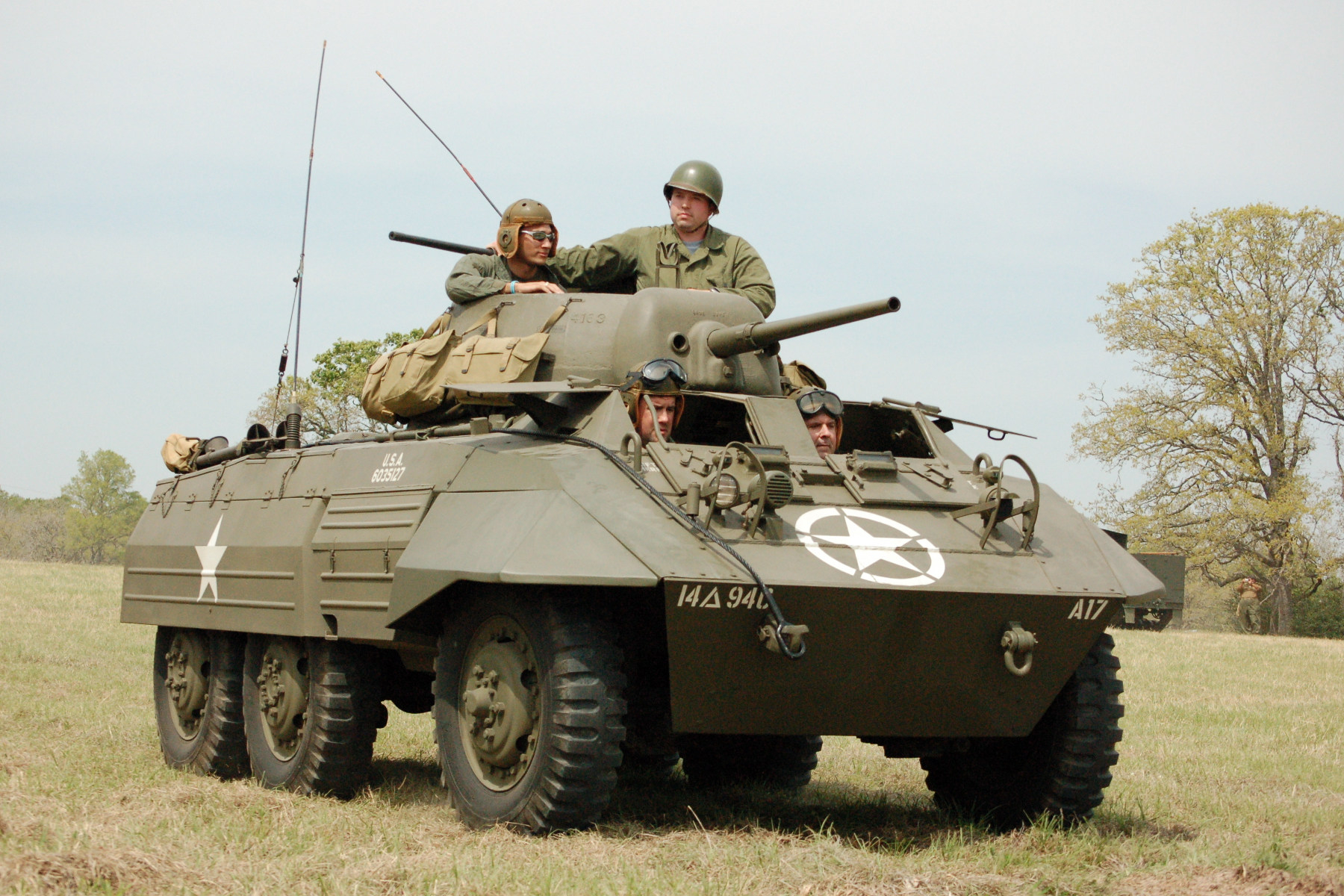 General: The Armored Cars, M8 and M20, had varied acceptance in this theater. However, on the whole, using organisations were not satisfied with the performance of these vehicles as they felt they were underpowered, lacked maneuverability, sufficient flotation for cross-country operation, and sufficient armored protection. These vehicles were not reliable, resulting in excessive quantities deadlined in maintenance shops for repair.

Engine Assembly: Considerable overheating of the engine was encountered due to the following reasons: 1) Stowage of personal equipment on rear deck, cutting off supply of air through engine hatches. 2) Debris being drawn into the engine compartment. 3) Vehicle under-powered, requiring continual high engine output. Oil entering the cooling system.

Fuel Tank Assembly: The bullet proof linings of the fuel tank swelled to such an extent that the capacity of the tank was only 75% of normal. Pieces of disintegrated lines and cells would clog the fuel lines. It is recommended that the lining of the fuel cell be improved.

Cylinder, Wheel brake: Excessive corrosion of the wheel brake cylinder causing the brakes to stick was a continual complaint. Investigation showed no signs of moisture, and the conclusion was that the fluid being used was at fault.

Floor Plate in Driver’s Compartment: The floor plate offered no protection from mines for the driver or assistant driver. Many casualties were reported because of this deficiency. Ordnance Technical Bulletin #35, 28 April 44, authorized and described the procedure for the installation of ¼” hard-faced armor plate in the floor of this compartment.

37mm Ammunition Stowage: It was found desirable to use radio combinations other than those provided as standard equipment. The installation of the SCR-506 radio eliminated the ammunition rack in one sponson, which materially reduced the number of rounds of 37mm ammunition carried. Ordnance Technical Bulletin #44, 8 May 44, provided for additional racks to be installed with the SCR-506 radio. 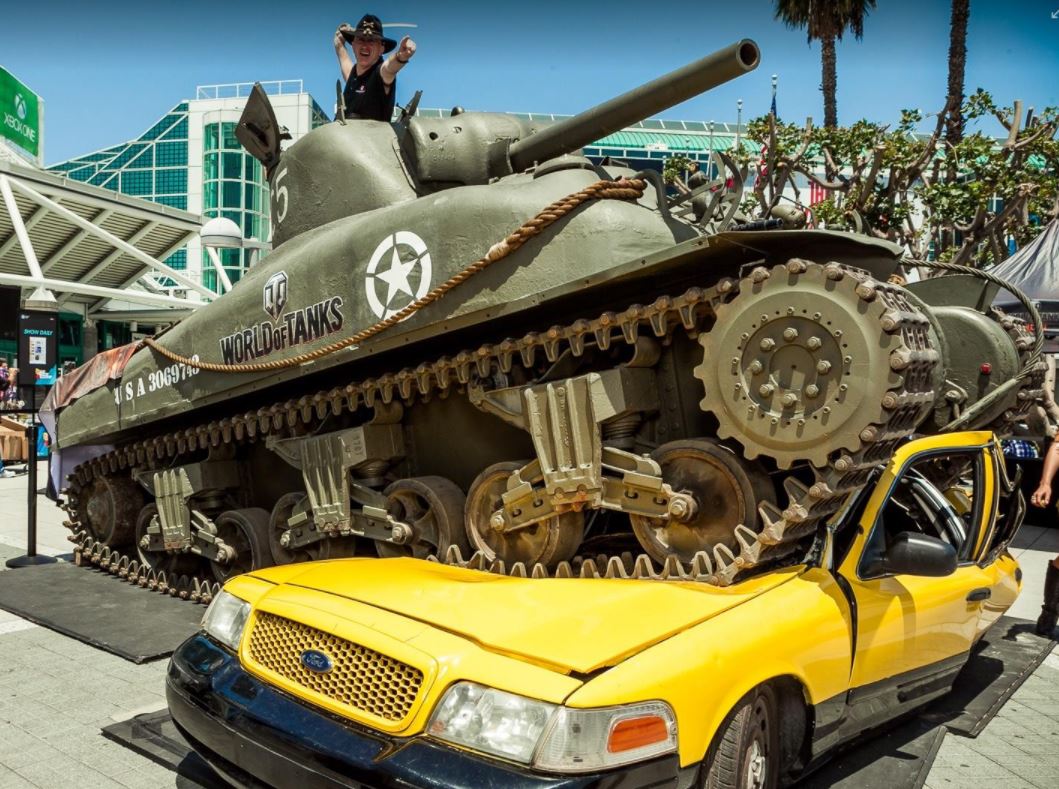 General: The medium tank M4 series and related gun motor carriages proved mechanically reliable in the European campaign. In many cases the troops fighting these vehicles were dissatisfied with the performance of the vehicles primarily from the standpoint of basic armor, lack of fire power, and lack of floatation under various conditions. The M4A3E8 tank was the most desired tank of the M4 medium tank series, because of its increased firepower and floatation. Organisations added armor plate to these tanks to give them increased protection. Other organisations completely sand-bagged the outside of the hull and turret for protection against bazooka fire. With this added weight, certain suspension difficulties were experienced, but not to the degree anticipated.

Head, Engine Cylinder, with camshafts: Tanks powered with Ford GAA tank engines arrived in this theater with cylinder head studs only finger tight. It is recommended that stricter supervision be initiated on the final inspection of these engines during manufacture.

Battery, Assembly: Vehicles were received with dry charged and moist non-charged batteries in this theater. The batteries were improperly serviced at the port, and thereby failed to hold the charge. Batteries had only 30% or 40% of their rated normal capacity when put in service. It is recommended that wherever possible, combat vehicles be shipped to Theaters of Operation with wet charged batteries. Further, it is recommended that Ordnance personnel responsible for the servicing of combat vehicles when off-loaded in the Theater of Operation be thoroughly instructed in the proper servicing of dry-charged and moist non-charged storage batteries. [Chieftain: This seems like a rather passive-aggressive way of saying “what the hell are those guys doing?!]

Shaft, Propeller, with Joints, Assembly: Propeller shaft breakage was common in all tanks. However, propeller shaft failures were more prevelant with the Carriage, Motor, 105mm Howitzer M7 and Tank Recovery Vehicle M32, M32B1 and M32B3 than in the other vehicles. The lateral strain applied when using the winch in the tank recovery vehicles caused excessive propeller shaft failure. Coasting down hill with the clutch disengaged and then suddenly engaging the clutch caused breakage in other cases. Many other propeller shafts were broken when jerking vehicles loose from frozen ground after standing for an appreciable length of time. Strict driver supervision and continual instruction were instituted to minimize propeller shaft failures due to overspeeding. Instructions were issued to using units that all vehicles frozen to the ground would be pulled loose by another vehicle. [Chieftian: Another common result of trying unstick from frozen ground was the shearing off of drive sprockets from the wheel] 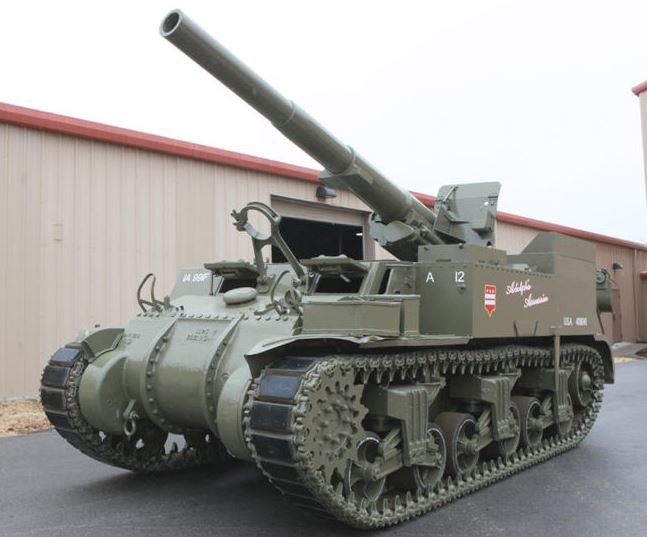 The mechanical performance of these vehicles was reliable, and the using organizations were satisfied with the mobility but expressed a desire for increased floatation. The difficulties reported for the M4 series tank chassis and related GMCs, and the Continental R975 engines were prevalent with these vehicles. Requests for design changes included an increase to at least 500 mils of traverse to each side, will require outriggers and removal of parts of the sides of the vehicle, increase the width of the spade, lengthen the cannoneer’s platform, hinge the gunshield so that it can be laid from the front. 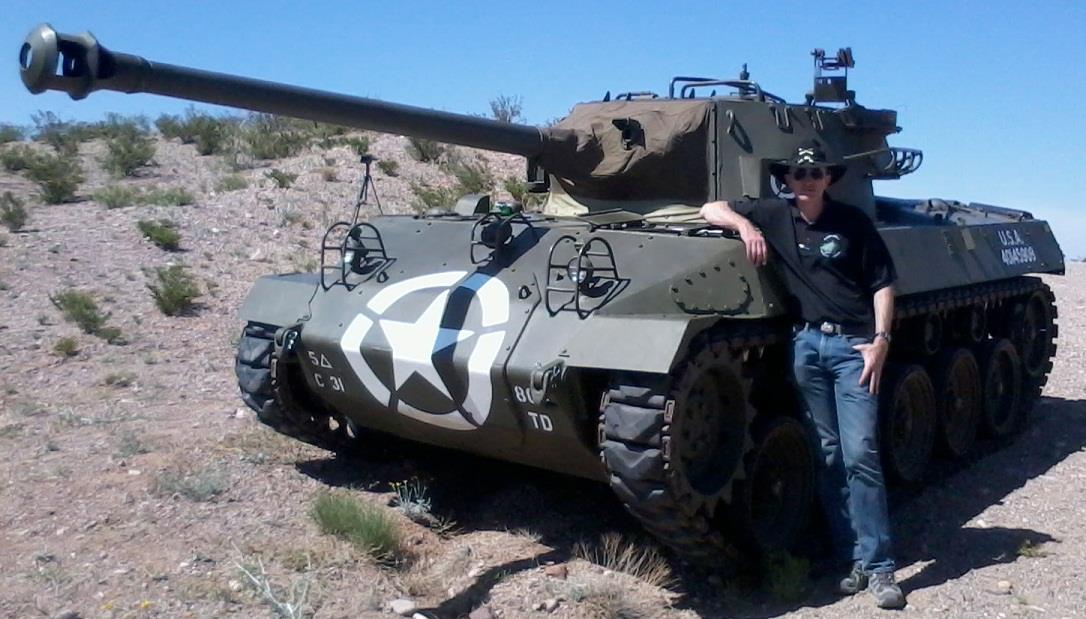 Number in hands of troops: 689

General: This vehicle was well received by tank destroyer units. The high mobility of the vehicle was a definite advantage, though the using troops felt that the very light armor should be corrected. The M18 GMC was often employed in missions beyond the scope of its design, such as direct firing at pill boxes. It was necessary to deploy these vehicles in these roles because of the lack of fire power of the medium tank.

Hull: Hulls were found warped after long usage, which resulted in the entire suspension system being thrown out of alignment. The suspension systems were aligned by shimming under the axle shaft support housing, final drive support, and comp-idler spindle. It is recommended that the hull side plate be increased to sufficient thickness to support these components without warping when operating over rough terrain and severe operating conditions.

Miscellaneous: Using organisations have requested a protection for the open top, to prevent mortar, hand grenades, and small arms fire directed down, from injuring personnel in the turrets when the vehicle is operating under combat conditions. This protection can be a folding top set into the top of the turret which, when thrown open, will not interfere with more than one-third the present opening in the top of the turret.

There will be a Part 2 next week.

The ever-reliable, trouble-free Bob will take you to the forum thread.