Armour is measured with respect to two main factors: The raw thickness of the armour plate, and also the slope of the armour. (Another is the hardness factor, but this is not modelled). This latter is important for two reasons: Firstly, it increases the chance of a ricochet, and more importantly, it effectively makes the armour thicker. 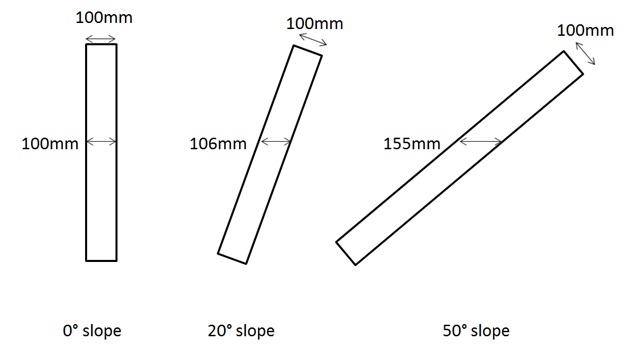 (Note that different countries measure slope differently. In this example, the measurement is from the vertical. Some statistics measure from the horizontal, so instead of ‘0’ read ’90.’ When comparing sources, be sure to verify their reference plane)

The actual effect is a little more complicated, due to the tendency of AP shells to turn into the plate upon impact (“Normalisation”), but you can see the gist of it. The more a plate is sloped compared to the trajectory of the shell, the harder it is for the shell to penetrate, and this effect increases exponentially the more it is sloped.

The mathematical equation for this is as follows: Thickness of the plate divided by the co-sin of the angle from impact trajectory. So, the example for the case of a 100mm piece of plate at a 20° slope from vertical with the shell trajectory being parallel to the ground: 100\cos(20) = 106.4

Now that you know the effect of slope on armour, you can use this information both offensively, and defensively.

In the defense, use inclines found on the terrain to artificially induce slope. For example, if you can position yourself on a 20° ramp or hillside, your vertical, unsloped armour suddenly has a 20° angle to enemies which are at the same elevation to you. If you already had armour sloped at 30°, that 20° just dramatically increased the effective slope to 50°, with the accompanying exponential increase in effective armour thickness.

Here’s an example by the numbers.

Let’s say we have a tank whose glacis (Upper front slope) is 45mm, steeply sloped at 60 degrees. Our formula gives an effective armour equivalence of 90mm. The tank driver finds a hill which has a slope of 10 degrees. Relative to the enemy vehicle, this armour plate is now sloped at 70 degrees. Plugging into the calculator, that gives us an effective thickness of 131mm.  The benefit of the mere ten degree slope in this situation should be obvious.

What if you find yourself on a piece of flat terrain where you cannot find a ramp to increase your vertical slope? All is not lost. You may not be able to affect the vertical angle of incidence, but you can affect the horizontal angle of incidence. Or, in plain English, if you can’t point your tank up or down, point it sideways. 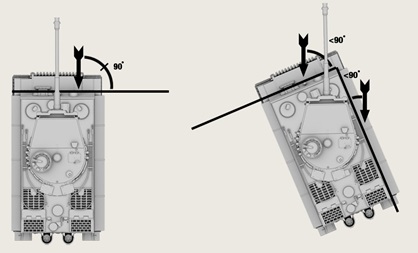 There’s usually not much you can do about your turret: You will obviously be forced to point your cannon at your target, so the target will similarly have a good perpendicular angle on the front of your turret. (If you have a long reload time, consider traversing a little until reload is nearly complete)

However, if your hull is visible to the target, rotate it a small bit. Not too much, as you don’t want to make vulnerable your weak side hull armour, maybe 15-20 degrees or so at the most for a typical engagement, unless you are firing around cover and the hull is protected. This will increase the effective armour thickness in the exact same armour as slope from the vertical does as described above. Remember that although your effective front hull armour thickness will increase exponentially the more you rotate the hull, your effective side armour thickness will decrease exponentially, plus it becomes an easier target.

If you have far too much time on your hands, it is possible to estimate the theoretical ‘sweet angle’ for your tank. Taking the example of a Pzkpfw IV which has 80mm of front hull armour and 30mm to the side, most of which has no vertical slope to speak of, if you rotated the hull 10 degrees, you would have an effective armour thickness of the front hull of 81mm and the side hull, in the unlikely event of a hit, of 172mm. Rotate to 30 degrees, though, and the front hull armour has gone to 92mm equivalence and the side hull has dropped to 60mm, due to the decreased angle. 20 degrees of rotation, however works out as the ‘sweet angle’, with about 86mm of armour equivalence regardless of if the front or side is hit.

The exact angle for any tank will depend on the ratio of front to side hull armour. Pzkpfw VI has a much lower ratio, with 100mm of front hull armour, and 80mm of side hull armour, all of which, for purposes of this experiment, are pretty much vertical. As a result, the Tiger can ‘afford’ to make the side armour more vulnerable. The ‘sweet angle’ for this tank is some 39 degrees, providing both front and side effective armour values of about 127mm. Most tanks cannot afford to rotate that far, however, before the sides become unacceptably vulnerable.

It is, of course, possible to combine the effects of inducing both vertical and horizontal slope. Place yourself on a ramp or hillside –and- rotate the hull a bit and gain the cumulative benefits of both angles.

So that’s the defensive aspect. A lot of people seem to forget, however, that the maths work the other way as well. You can artificially reduce the effect of your enemy’s armour by positioning your tank accordingly. Usually this means taking the high ground. 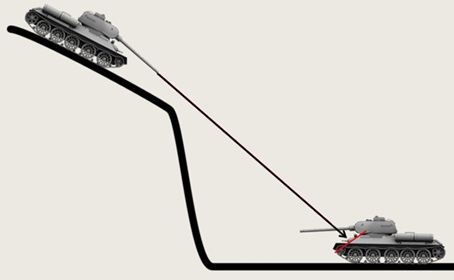 Let’s take a fairly extreme example. This happy-looking Marine is in the driver’s hole of an M1A1 tank, one of the best protected vehicles in the world today. 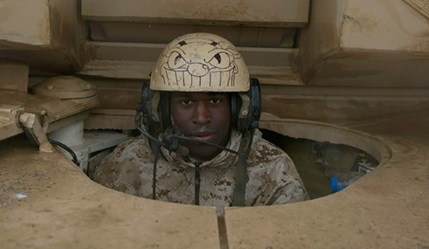 You can eyeball the thickness of the glacis armour for yourself, but it’s somewhere just over 2”, let’s say 60mm. Doesn’t seem like much, until you realize that the armour is sloped at about 82 degrees from the vertical, making it equivalent to some 430mm of armour from a shell impacting from a trajectory parallel to the ground. An enemy tank positioned on the high ground which applies a mere ten degrees of relative angle which fires and hits the Abrams on the glacis will instead encounter effectively only 194mm of armour equivalent, less than half.

Such relatively shallow elevation advantages may not prove particularly useful in engaging an enemy’s roof or engine deck, as they are still going to have high chances of ricochet and high relative thickness values, but they do mean that front armour plate which was nominally impervious to your cannon may suddenly prove vulnerable. That seemingly invulnerable IS-3 with the sloped thick front hull can be penetrated much more easily in that front hull by shooting at it from an angle a little above and to one side than if you were trying to slug it out on an equal basis from the front.

So use the angles! Just don’t whip out your scientific calculator in the middle of a battle, it’s probably not worth it.

Further information with even greater detail on the game mechanics is available on the Wiki.