On 19th May 1942, the Office of the Chief of Ordnance sent a letter to the Commanding General of Aberdeen Proving Grounds. I can only imagine the dread and trepidation with which such letters from OCO would be received and opened. “Great. What do they want to throw at us now?”

“The Armored Tank Corp of Jersey City, New Jersey, is shipping to Aberdeen Proving Ground a combination fuel and ammunition trailer. Upon receipt of this trailer it is requested that it be given a shot test to determine its suitability for application to combat vehicles for towing behind combat vehicles supplied of fuel and ammunition. The test should include approximately 250 miles of operation over various types of terrain and the test should be run in conjunction with other vehicles. No special test program need be set up and the trailer can be towed by any vehicle that is running at Aberdeen Proving Ground on other tests.

Mr Bechhold of the Armored Tank Corp has stated that the British Military Mission and the Armored Force are interested in this trailer, and these people will be notified when the trailer arrives so that they can witness such tests as may be interesting to them. […] “

So far, nothing –too- unusual. But just below, the letter probably didn’t reassure the CG of Aberdeen that this was going to be a great use of his men’s time or resources.

“This office does not feel that this type trailer is suitable as an ammunition and fuel trailer for combat vehicles, and does not satisfactorily meet the military requirements for such a trailer as set up by the Armored Force in their report on Project No. 200 [Chieftain’s note: No, I’m not sure what that was]. This trailer has been produced by the Armored Tank Corp. without any supervision from this office, and the work has been done by the company’s own initiative. The main purpose for sending the vehicle to Aberdeen Proving Ground is to give an opportunity to the British Military Mission and the Armored Force to see the trailer in operation”.

The contraption showed up the next week. 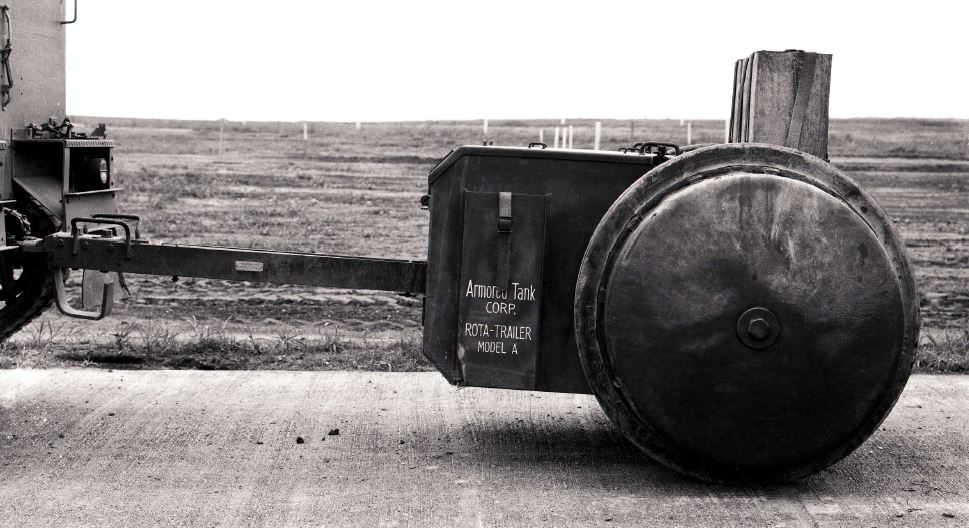 Some of you may be familiar with it. There’s one in Bovington. David Fletcher gives a good description of the thing. Click Bob.

Rotatrailer from the British Perspective

“The trailer is a two-wheeled vehicle of the unsprung type. The wheels are of the hollow drum type, and each is capable of carrying 60 gallons of fuel.  They are equipped with 40”x5” solid rubber tires on a steel rim that is welded to the drum type wheel. The outside of the drum is covered with rubber for self-sealing purposes when punctured by .30 or .50 calibre ammunition. The rubber is covered with a hide cover for protection. A partial inspection of the hub of this wheel revealed that the design is very complicated and is not made according to standard manufacturing practices. It consisted of a considerable number of parts, and they are difficult to assemble.

The cargo body is built in a rectangular box shape and is divided into four compartment. The sides and partitions are made of 1/8” steel and all seams are welded. Each compartment is covered with a door that is hinged on one side and is fastened on the other side by means of two wing nuts. The doors have a flange on each side that fit over the sides on the compartments to partially seal against dust and water. The flanges fit close to the compartment sides, and due to this, the compartment doors are difficult to open. Considerable time is also required to open the compartment doors due to the wing nuts having to be unscrewed a considerable distance before the doors are released.”

The various compartments were: 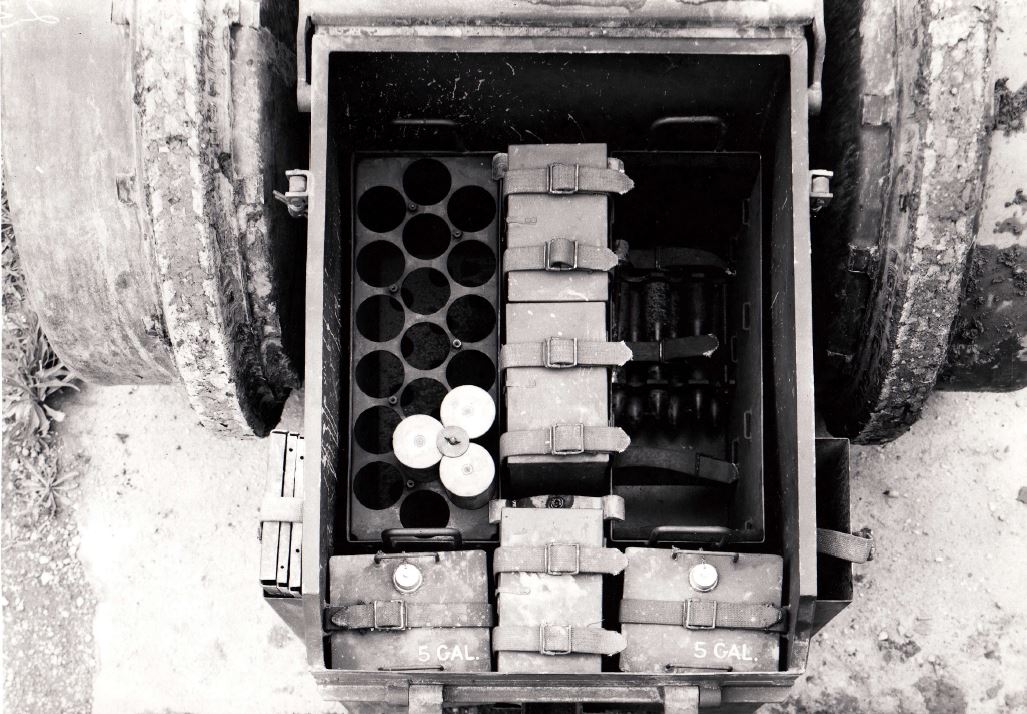 1)      Hand operated fuel pump and sufficient length of hose to pump fuel from the wheels.

In the end, the trailer clocked up 26 miles cross-country, and 250 miles on gravel roads, being towed behind a Medium Tank M4, and two types of half-track.

“The travelling characteristics of the vehicle are excellent when traveling over flat, rough terrain. The vehicle follows the contour of the terrain and bounces very little. However, this results in considerably more strain on the vehicle. The impact when traveling over rough terrain must be absorbed in the vehicle itself, and none is dissipated as a result of the bounce. This fact is clearly demonstrated by the five gallon oil cans mounted on the top of the vehicle during the road test. The cans were filled with water, and during the rough terrain operation, the cans bugled out and flattened from the pounding effect of the water. After 100 miles of operation, all of the cans began to leak, as a result of vibration and pounding action.”

But then there were good points.

“A wheel of the vehicle, when empty, weighs approximately 400lbs, and when filled with 60 gallons of fuel weighs approximately 800lbs. Due to the heavy weight of the wheel when empty or filled with fuel, little difference is noted in the traveling characteristics. The heavy wheels add to the stability of the vehicle, due to the low center of gravity. When operating the vehicle over side slopes ranging up to 50% and running one wheel over humps at high speeds, the vehicle did not show any signs of tipping. […] On rough terrain operation, the vehicle travelled equally as well with the wheels empty as when filled.”

“The vehicle shows a tendency to skid and weave when going around hard surface curves or side slopes of rough terrain. This adds an excessive amount of strain on the vehicle, although the vehicle did not show any effects. The vehicle would skid considerably more as the speed was increased.

The hollow drum type wheels provide ample flotation for the vehicle during muddy terrain operation. In mud, that the prime mover would penetrate as much as 15”, the trailer would sink slightly more than the thickness of the tire, although the mud ridged by the prime mover causes the cargo compartment to drag. In this type of operation, the mud and water works its way into the lower compartments of the cargo body which would cause damage to any cargo carried there. [Mud in lower compartment shown below] 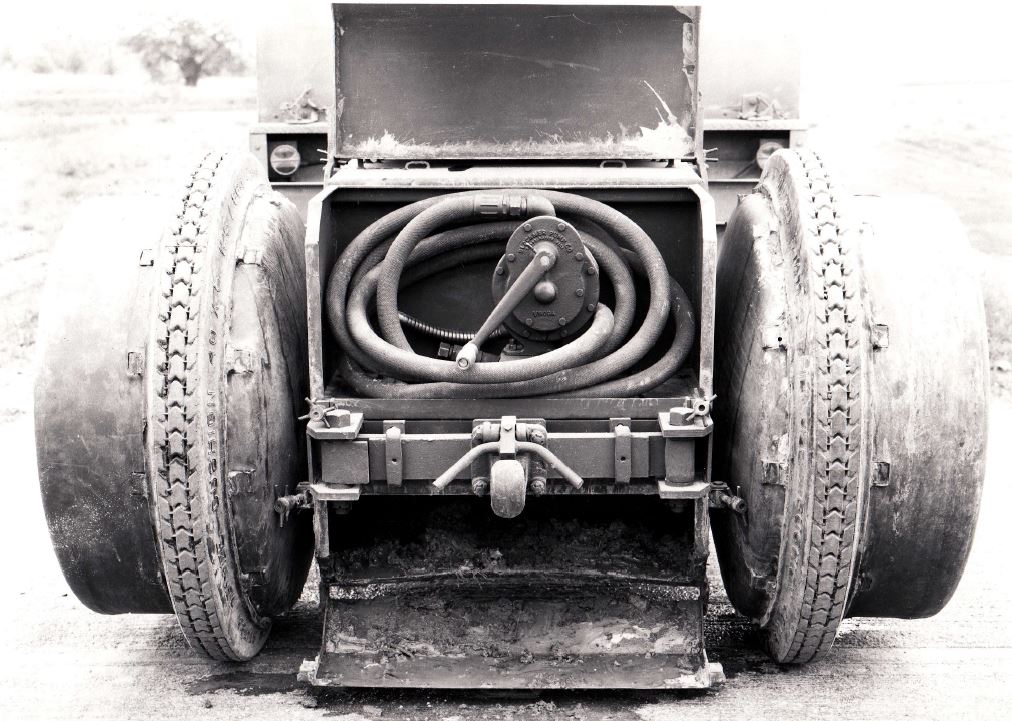 “The trailer was damaged while on road test due to negligence on the part of the prime mover drivers. The trailer was coupled to the Medium Tank, and the tank operators were backing the vehicle without observing the action of the trailer. While backing, the trailer turned crosswise, resulting in the tank twisting and bending the tongue and the track damaging the front portion of the cargo body.

This vehicle is difficult to back when coupled to a tank. The pivot point of a tank is located approximately at its midpoint, therefore, any slight sideway movement on the part of the pintle readily changes the direction of travel of the trailer.  For this reason, considerable care must be exercised when backing this vehicle with any type of prime mover, and moreso when coupled to a tank.”

“This vehicle has superior travelling characteristics to those of a similar design equipped with pneumatic tires. The vehicle bounces and weaves very little when travelling over rough terrain. This is entirely due to the heavy weight of the wheels and the solid rubber tires.

The lunette weight reaction of 325lbs is considered to be excessive. This makes the vehicle difficult to move by hand or couple to a prime mover.

The ground clearance of 8 ¾” is inadequate for safe operation over uneven terrain and obstructions that can be traversed by the prime mover.

The cargo body is composed of various compartments with a separate door on each one. This limits the type of cargo that can be carried in the smaller compartments. The method of fastening the compartment doors requires considerable time when opening and closing them. These characteristics are objectionable in a vehicle of this type.

This vehicle cannot be considered as an armored vehicle. The body is built of 1/8” steel, and this thickness is not effective against any type of projectile fired by a gun.”

This vehicle should not be considered for use by our armed forces.

One wonders what went through the mind of the British Military Mission as they followed these tests, put on specifically for them.

But one question remains unanswered? Why is this entitled “Part 1?” Well, you don’t think the Americans would let the failure of this particular design stop them, do you…?

Bob will now take you to the forum thread. For those of you who don't know, I've a Facebook page here , and one day, when I have time, I'm going to try streaming more, at http://www.twitch.tv/the_chieftain, probably late afternoon Pacific time.