Hidden in the depths of one of the back boxes of Ordnance's archive materials is a small folder entitled "Press Release." Given the contents of that folder, I can only assume that the segments which follow had been extracted from field reports for use in either the media, or Congress, to blow Ordnance's trumpet.

The purpose of the collection, however, and the fact that they are generally all cherry-picked good stuff (the page for 1944 which I may put up later does actually state some negatives), does not, however, mean that the source information was wrong, or that the people making the reports did not honestly mean what they said when they reported them.

So, in order that these words don't languish unseen again by human eyes, I present them below as extract and citation The entiire group below was collated December 11 1942.

Confirmation has been received by reports from the Western Desert, indicating great satisfaction with the M4 Medium Tank (Sherman).

The position of the main gun in the turret has made possible the advantage of maximum cover in “hull down” position in addition to good observation by the tank commander. There is concrete evidence that the enemy tanks, including the special PzKw IV (with the long-barrelled higher velocity 75mm gun) has been destroyed up to ranges of 2,000 yards. All troops are indicating that there should be more Shermans sent out at the earliest opportunity.

At the present moment there is no information regarding the use of the stabilizer, and it is not expected that this will be available early as it is still the policy to fire from stationary ‘hull down’ position whenever the opportunity permits. (Paraphrase of a cable received in Washington Nov 1 1942 from Major General, Middle East, to B.A.S. Washington).

Users are giving unstinted praised to all American equipment, particularly M4, which embodies all desired improvements except ideal gun sights.

Would again stress it is vital we receive earliest large numbers M4 regardless of the availability of tools and spares for which we are prepared to wait. (Extracts from Middle East Cable  Q (AE) 63086)

The Tanks M4 have made a great impression on everyone, and the troops are thrilled with them. The long gun is magnificent, both in accuracy and in penetration, and the sights are evidently a considerable improvement on the Grant. (Extract from letter to BAS Washington from Major General, AFV, Middle East) 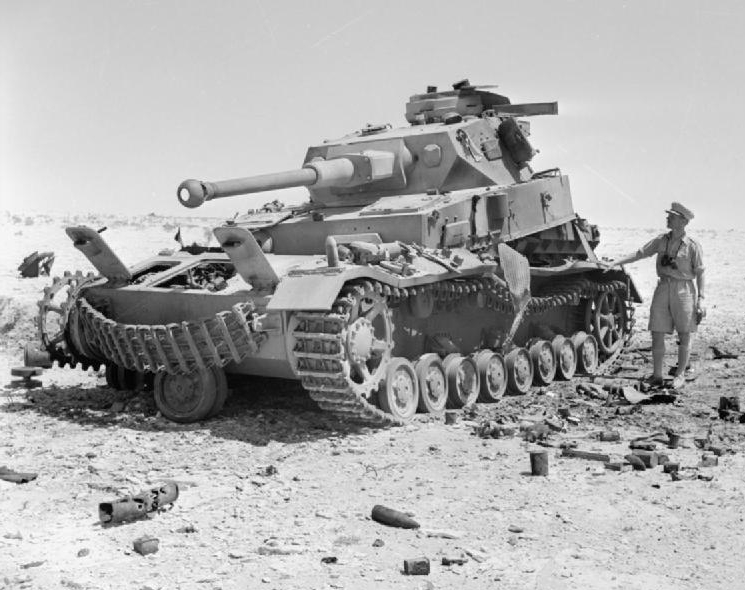 The Special Mk IV enemy tanks are being destroyed with M61 ammunition at ranges up to 2,000 yards.

According to first reports from the Western Desert, the Shermans are excellent. There is maximum concealment in the ‘hull down’ position and the commander has good observation.

The 105mm Gun Motor Carriages and ammunition have proven very satisfactory. Although they have not been used in a very mobile role as yet, great results are expected in use against enemy guns. (Paraphrase of the Prime Minister’s message to the President, October 30 1942)

In continuance of my last cable relating to the Medium Tank M4 (Sherman) further reports confirm satisfaction. Emphasis is placed on the extremely tough nature of the fighting during the period 24th to 28th October. Mines, anti-tank guns and very heavy concentrations of artillery fire restricted tank movements until such time as a combined infantry and tank attack on the night of November 1st-2nd opened up a clear road. However, the period of close fighting wore out the enemy’s armored and anti-tank gun strength, so that our armor had a decisive superiority in the final action between armor on the 4th November.

Many of our tank casualties were due to mines and shelling which affected the tracks and suspensions only. Enemy APHE which penetrated our tanks caused fuel and cordite fires. All evidence shows that gasoline causes an instantaneous fire whilst diesel fuel ignites more slowly and gives crew a better chance of evacuation.

An investigation is in hand as to whether many tanks might be saved if the ammunition bins are more heavily armoured even at the expense of the number of rounds carried.

There are 75 Medium Tanks (M4) and 60 Medium Tanks (M3) which have been recovered and repairable. Exact figures will be sent when the battlefield is cleared.

Information to date shows that little use was made of the stabilizer during the static fighting which is described in paragraph 1. No information is on hand at present regarding its use during the more mobile operations which have taken place since that date. (Paraphrase of a cable from the Major General, AFV Middle East, to the Director of Armored Fighting Vehicles, War Office. Received 12 November 1942) 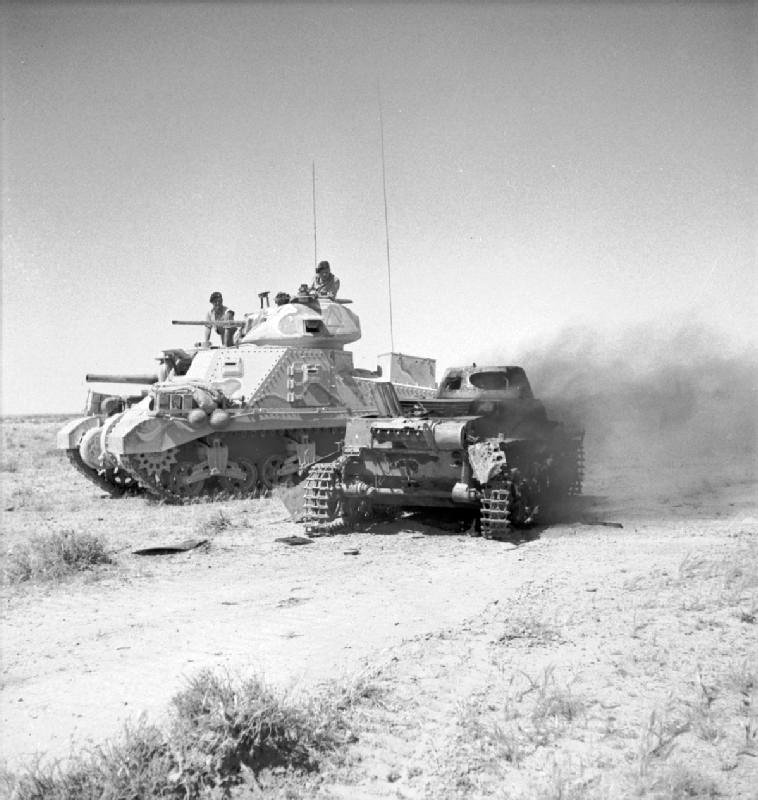 General Grant’s armor is most effective against 50mm fire and this tank can outgun and reduce these smaller A/T guns with ease. Considered at least equal to German Mk IV in all respects (Paraphrase of cable from Cairo to Milid, No 1158, June 21 1942

Captured German diary reads “Tommy is using an American tank (M4 medium) which has incredible armor and very good armament. (Paraphrase of cable from Cairo to Milid, No 1131, June 15 1942)

Crews loud in their praise of American Mediums. I talked with tank commanders who claimed 8 German tanks to their credit, and whose tank had been hit as high as 12 times by 50mm and even 88mm. (Paraphrase of cable from Cairo to Milid no 1090, Part II, June 1 1942.

Unofficial – American medium tank is reported as magnificent. Crews have great confidence in them. So far as reported, mediums have not been penetrated from the front. By maneuver of artillery and 75mm of medium tanks 88mm A/T guns have been silenced. (Paraphrase of cable from Cairo to Milid no 1076, Part II, Mey 30 1942)

Results of the test show the (US M3 Light) tank to be highly satisfactory mechanically for desert warfare (Extract from Tests and Modifications for the US M3 light tank from the Mechanization Experimental Establishment, Middle East) 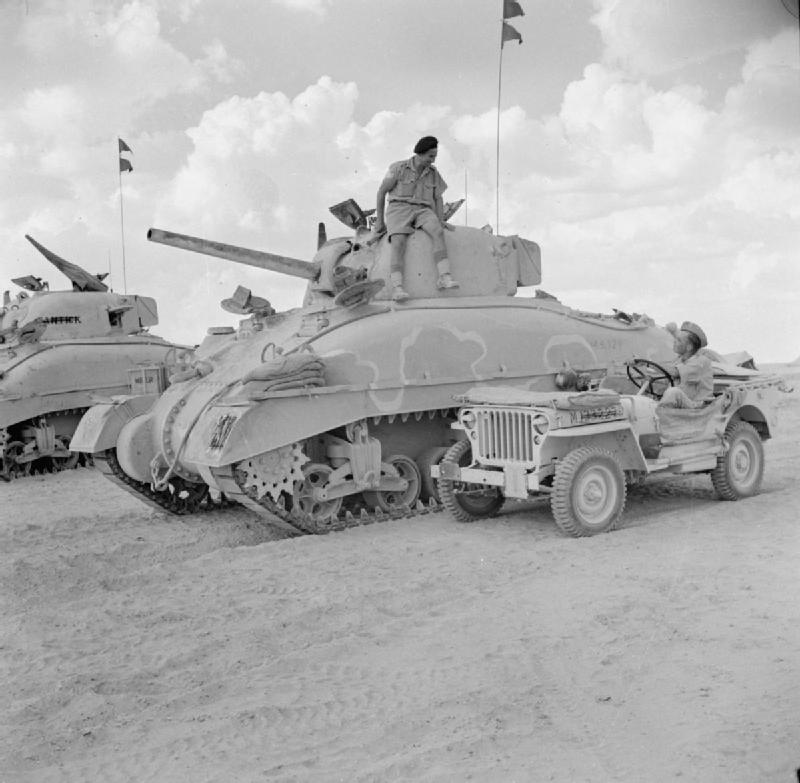 The all round performance of the US M3 Medium Tank, the light tank, the scout car and the Bantam car has been pleasing to all the officers I have seen and talked to. (Paraphrase of cable from Cairo dated March 31 1942, signed Fellers)

The American tank has done wonderfully well mechanically. They (The British in the Middle East) have have very little trouble with it. (Extract from Middle East Letter dated December 14 1941)

The battle performance of American M3 light tanks has proven superior to that of the British cruiser tanks in the present Libyan campaign. Official confirmation of this is given in the records of the British 7th Armored Division. This superior performance of the American M3 light tanks over the British cruiser tanks may have been the primary cause of orders being issued for the destruction of the official reports of the 4th Armored Brigade…. Unofficially, I have ascertained from British officers who found in the November-December campaign that they have a preference for the American tanks (Extract from paraphrase of secret message from M.A. Cairo dated February 23 1942 and signed Fellers)

Mechanical failures were responsible for a large proportion of 104 tanks lost by this Brigade (2nd Armored) in its retirement from MSUS, but only 1 American M4 was included in the group that failed mechanically. (Extract from paraphrase of secred message from M.A. Cairo dated March 18 1942 and signed Fellers)

According to Brigadier Gatehouse (commanding 4th Armored Brigade, which operated 166 American M3 lgiht tanks) his American tanks were engaged 23 times with German armored units between November 19th and December 17th 1941. During this period only 12 American tanks were lost due to mechanical failure, and the tank far exceeded fondest expectations of the British. The American tank is the most reliable tank on the Western Desert. (Notes based on conversation of Brig Gatehouse with Lt Ahee on 21 February 1942)

High ranking British tank officer of 4th Armored Brigade reports 32 days of continuous battle operations, during which time for care and maintenance was nil, with only 12 mechanical failures of US M3 light tanks. Said every officer and man in his unit was enthusiastic about the Light Tank M3. He wants American tanks and nothing else…. He is now prepared to accept the tanks as they come from America without further modification. Even though outranged by more powerful weapons, he had nothing but praise for the 37mm gun…. He had 47 disabled tanks repaired and returned to his unit by division maintenance personnel in the first week of the campaign. First time in his career this had happened. British tanks once out are out for the show. (Extract from study written by Maj Joseph Colby, Ord Dept, on observations from Libyan Theatre, December 1941)

All of the British Personnel with whom I have talked are enthusiastic about the Grant tank. (Obs of Colonel Purdue, June 11-June 19 1942). Under no consideration should our tanks be modified to reduce the machine gun fire-power which is frequently essential, is extremely effective and with training can become deadly accurate. (Comment in endorsement to Colby’s report by Col Bonner F Feller, GSC, Military Attache) 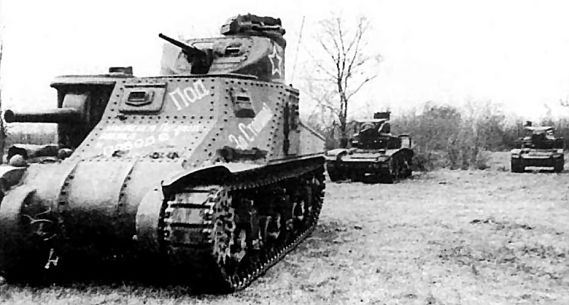 Finally, there was a letter from the Soviets.

I am very sorry for the delay in replying to your letter of Oct. 20th, 1942 in regard to the performance of American made tanks in our country.

Undoubtedly you will understand that since an article by an American correspondent, Leland Stowe, was published in the newspapers, this question has become very serious, and inasmuch as you asked us to give you our official opinion, it was necessary for me to consider this question in detail.

6. Great mobility and good maneuverability of Light Tank M3 which is due to the lightness of the engine.

It is well known that it is inpossible to design a universal vehicle sufficient to meet every condition, and each one of the existing tank models possesses some good features and some disadvantages.

It would not be right to come to a conclusion that American made Tanks are not effective in our country.

I feel confident that the Mediun Tank M4A2 with diesel engine which we are now getting upon arrival in the USSR will prove superior in combat action to the Medium Tank M3 of an old design which we now have in action in our country.

I sincerely trust that the publishing of Leland Stowe’s article will in no way influence your department which is now at work on the designs of combat vehicles.

Thanking you for your co-operation, I am

I would be curious to read Mr Stowe's article, if anyone could track it down.

There was another collection of observations, dated at the end of the war, but I'll come back to those.

In the meantime, Bob will take you to the forum thread. Otherwise, track me down on Facebook and sometimes I even stream on Twitch.