Well, the EBR has shown up on the live server, it might be a good opportunity to have a look at what the US Army thought of it.

The US Army, during the period of WW2, was historically not entirely averse to the concept of the Armored Car, or indeed, wheeled vehicles in general. Indeed, there was some cross-pollination between the branches, with the M8 Armored Car starting out life as a tank destroyer before being rejected for being undergunned, and the Tank Destroyer branch’s T66 being a derivative of the T19 armored car. At the most extreme end, Armored Force considered the Armored Car T13 to be a trackless tank (and it was produced by the Trackless Tank Corp.) 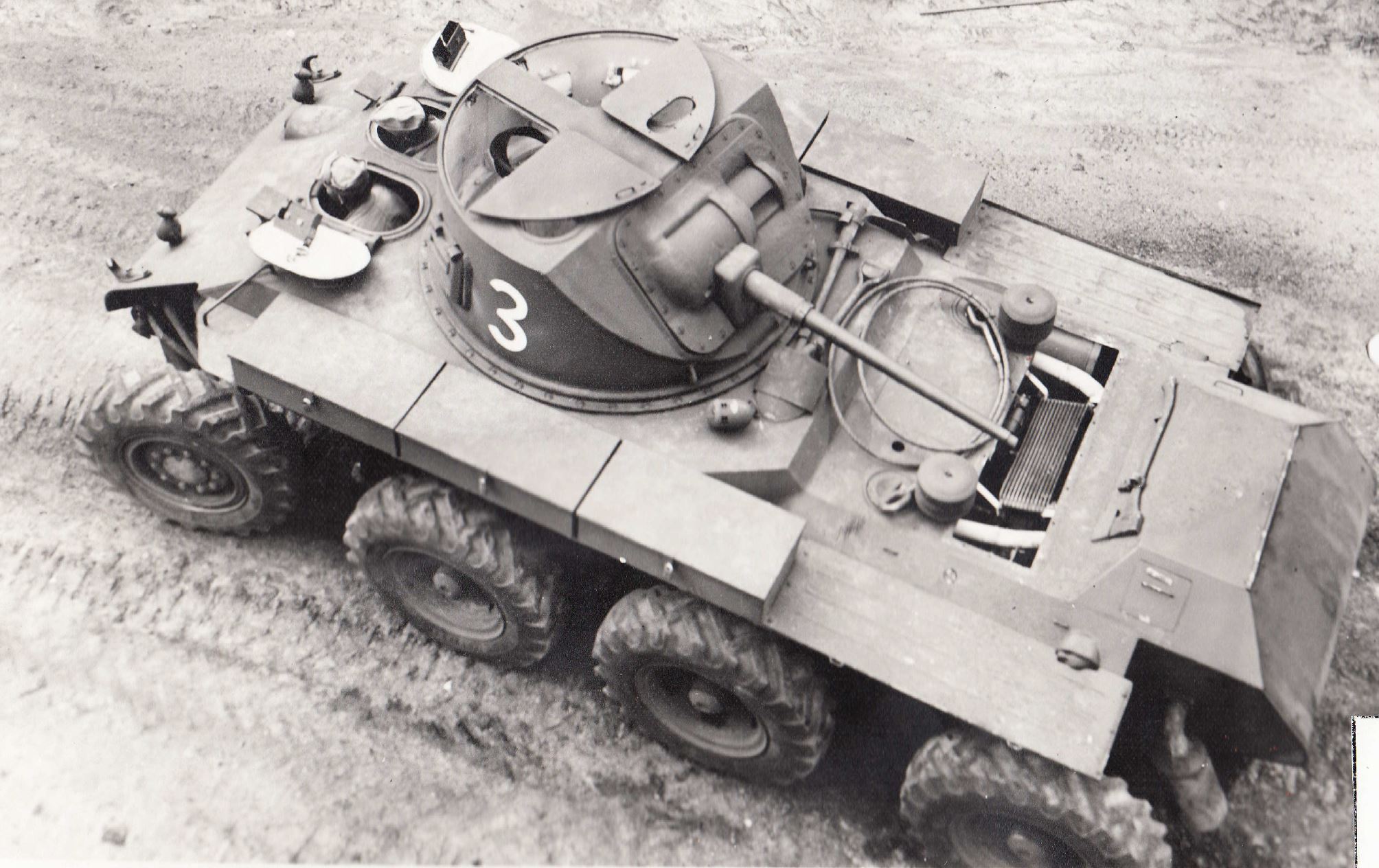 However, by the time the war was over, the US Army had pretty much hitched its wagon to the light tank. And, in fairness, the M24 was a pretty vehicle to hitch to. It wasn’t that there was any specific dislike to the armored car, it just felt that light tanks would do the job better. For example, in January of 1947, AGF directed Armored Board to submit for characteristics for an armored car of 16,000lbs mounting a 75mm gun. Bearing in mind that the utterly unarmoured and virtually useless T27 GMC 4x4 come in at just shy of 10,000lbs empty, and the T66 GMC blew through this at 28,000lbs empty, it would be interesting to know just what was being smoked up at AGF. Indeed, Armored Board reported that it didn’t think a 75mm armored car could be kept to that weight, automatic weapons would be better suited. 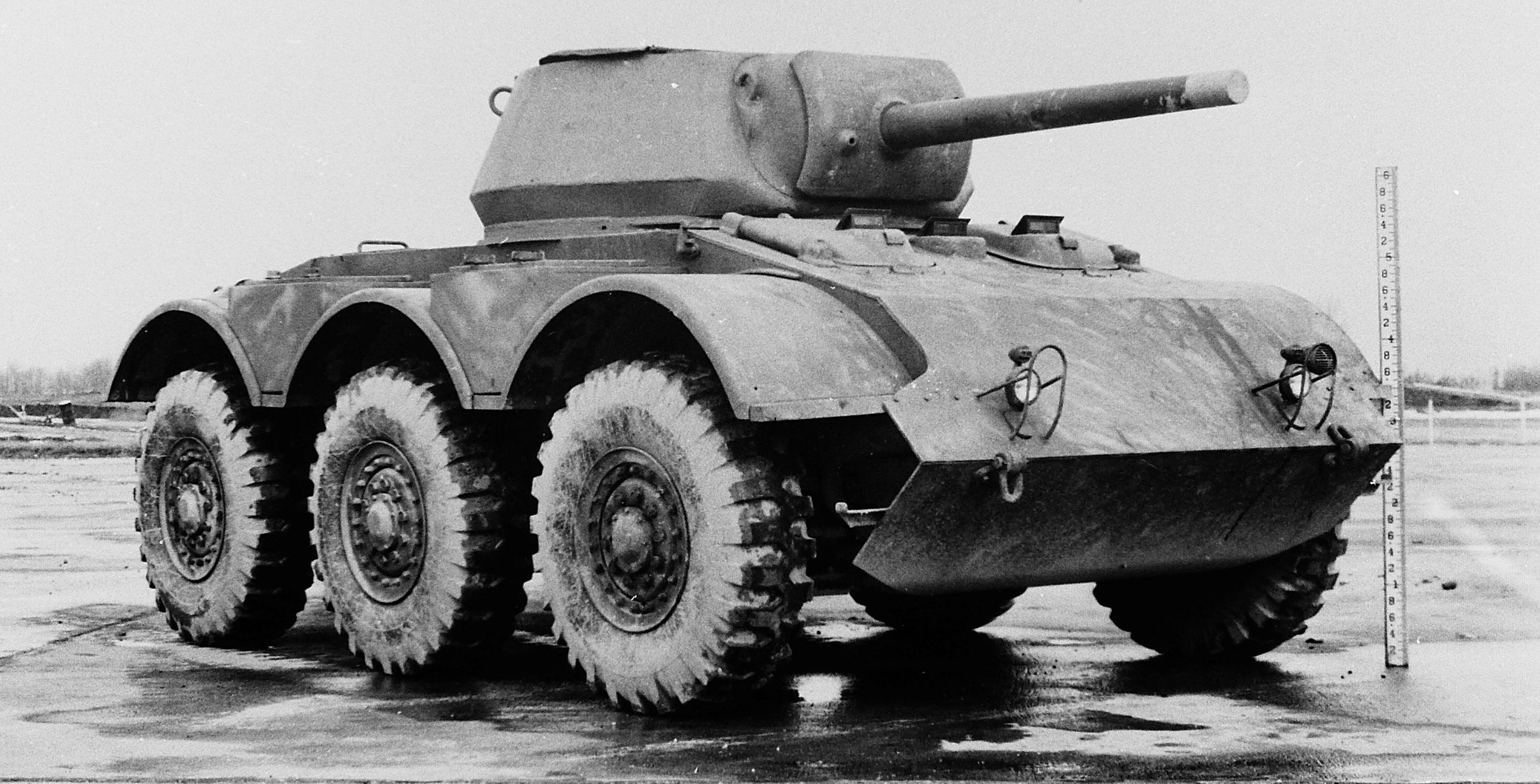 Army Field Forces accepted this position, but was later overruled by the Dept of the Army following an assessment of an Advisory Panel on Armor relating to reconnaissance. They didn’t see the point of an 8-ton armored car with just machineguns, and instead concluded that a 76mm gun would make more sense, and to be fair, they upped the weight limit a whopping 2 tons, to 20,000lbs.

A happy division of labor then seemed possible. At the Combined Conference on Armor in March 1949 between the US, UK and Canada, it was agreed that the US would go ahead with development of the light gun tank as a heavy reconnaissance vehicle, while the UK continued development of the Armored Car for the same purpose. In the end, within a few years these would become the T41 (By way of the T37), and the FV 601 Saladin.

That said, it wasn’t that the Army was specifically prohibited that the US could not produce an armored car meeting the earlier 76mm/20,000lb requirement, and this became Armored Board project 1548. Hooray.

The US was being kept abreast of progress in France in the meantime, with a visit by Col H. Heiberg to France around the New Year. The new French heavy armored car seemed interesting, and perhaps lessons could be learned for application to the US’s own domestic requirement. Still, the French vehicle was coming in at 14 tons, well over the Us’s limit. A request was made, and a little negotiation later, in April of 1951, a prototype of the EBR, Engin Blindé de Reconnaissance, showed up in Fort Knox, together with a detachment of mechanics and operators, but in the US’s documentation, it is merely known as the “Panhard Armored Car”. 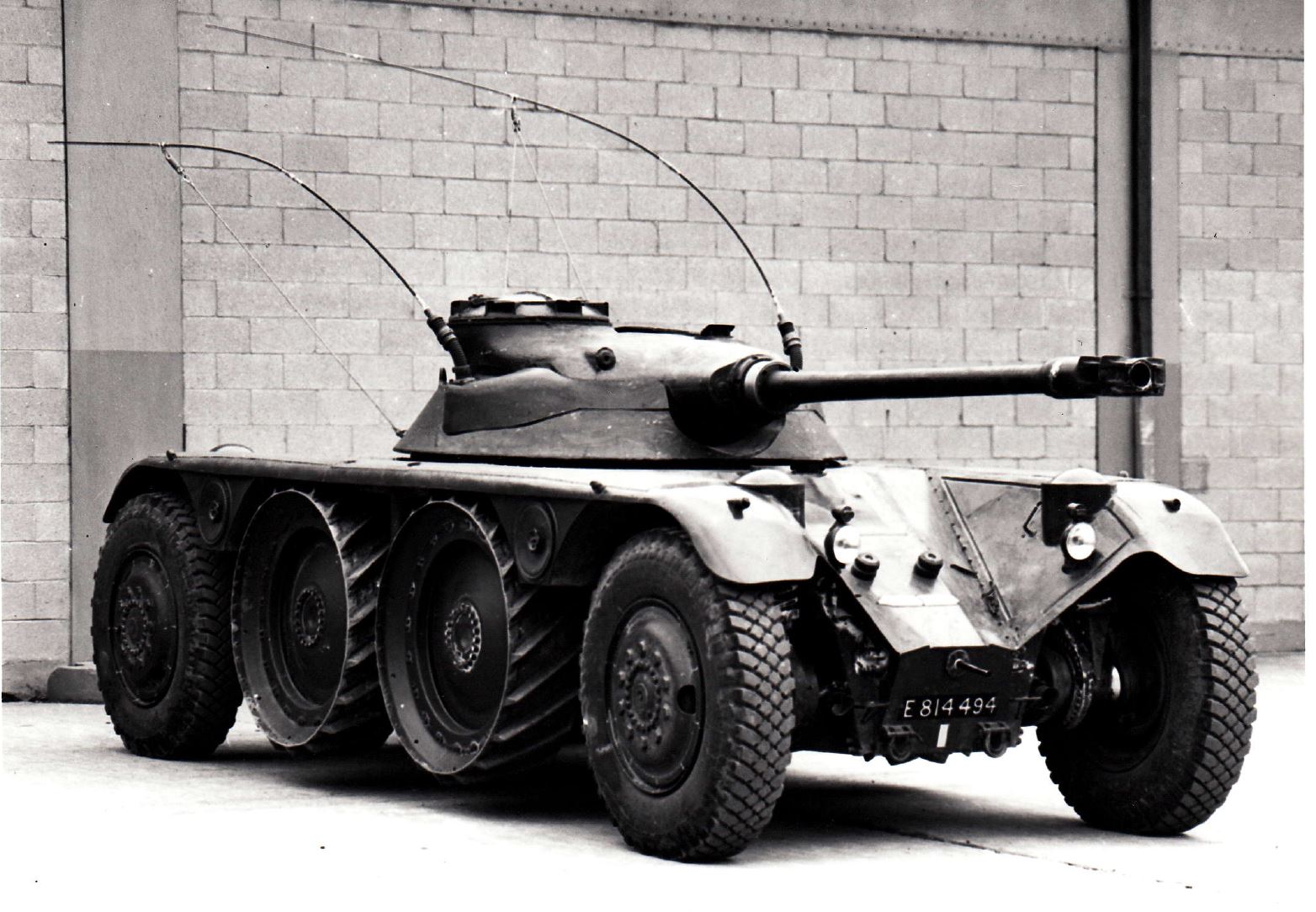 The vehicle was not delivered new. It was made available to the US after the French had done with it, and came with 20,038km on the clock. Testing in Ft Knox added an additional 537.7 miles (864km). In the course of testing, the vehicle was put up against T37, T41 and M24 as benchmarks.

The vehicle underwent a series of 12 comparative tests, and then were assessed under a number of other requirements.

The Panhard didn’t do too badly in the comparative tests at all, beating the light tank in:

It lost out in: 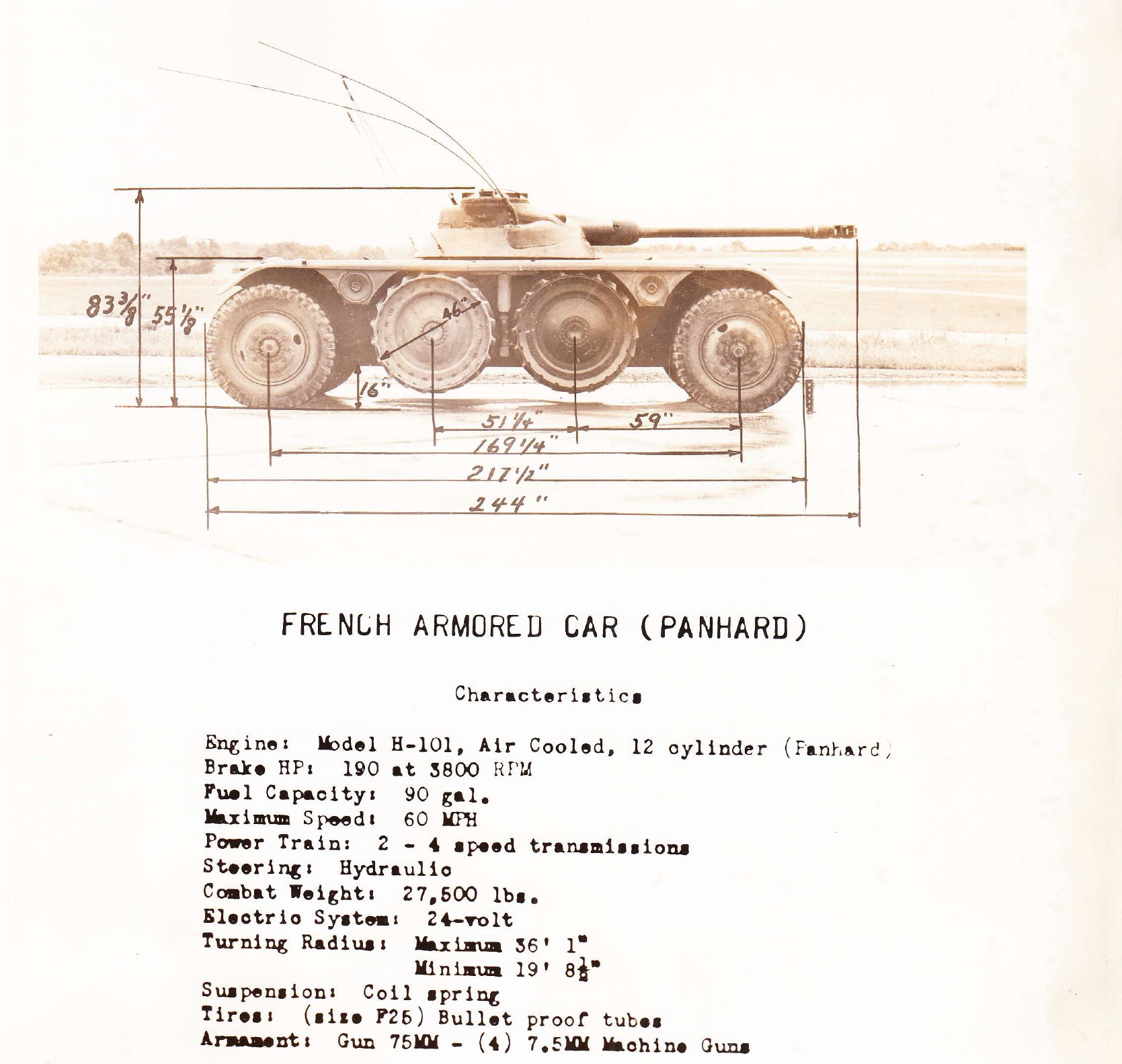 For a little more detail…

To determine speed, two tests were made. Firstly, a 2.5 mile rugged cross-country course, which was run three times, the average being 14.2mph. The Light Tank T37 averaged 15.8. Honestly, not a huge difference, but point for the tank.

They then ran the course continuously as slow as possible, about 2.5mph or less, for an hour, to test for overheating.

Then a 10-mile cross-country highway course was run, four times, with an average of 46.9mph, and a maximum point speed of 62.6mph on the level, which basically demolished the T37 which averaged 38.3mph and topped out at 45.

During the course of the testing, the air-cooled flat 12 cylinder engine came in for some praise. It was more than powerful enough to do anything the vehicle needed to do, and there were no significant cooling or other such maintenance issues, even in the 90 degree temperatures. When the vehicle did fail to negotiate a course, the failure came from the running gear, not the engine. Indeed, the crew were at greater risk of overheating than the engine was, a recommendation the Americans gave to the French was to install a more powerful blower. This would have served two purposes, they found that the turret interior became clogged with fumes after a period of fire. A bore evacuator was also suggested.

Also on the matter of crew comfort, note was made of the unprotected power shafts, and the ability of the vision periscope clamps to cause injury to the crew was specifically mentioned as well. Overall, though, despite the “very little room available for the movement of individual crew members once they are in position”, no serious negative effects were noted.

One point which the crew found objectionable, however, was the noise caused by the 7.5mm coaxial machinegun, which was found to be ‘excessive’. The 75mm gun was not. The proposed solution was to elongate the barrel.

The Panhard Armored Car is not difficult to drive. However, it is believed that it would take more time to train a driver for this vehicle than for US Tanks or the Armored Car M8 because the Panhard has two transmissions and complicated shifting sequences are required for maximum efficiency in cross-country operations. Training would also have to include change-over driving, i.e., rear driver taking over control from the front driver, and vice versa

The lack of escape hatches was noted (Not that there seems to be much room to access one even if it existed), and the driver’s vision was a bit constrained by the large fenders above his eye level. When closed down, the periscope gave him a ‘bare minimum’ of vision.

Under the section entitled “Ease of Maintenance”, the report stated:

Considering the location of the engine underneath the turret basket floor, the engine has unusually good accessibility for may of the periodic maintenance services. Without removal of the engine, the following items can be removed easily: Spark plugs, carburetors, fuel pump, cranking motor, and magnetos. Ignition timing and carburetor adjustments are easily made.

The engine appears to be highly reliable in that the personnel accompanying the vehicle stated that no repairs had been made to the engine in approximately 15,000 miles of operation.

That said, an attempt at a 14-hour endurance run had to be cut short due to a “very unusual” leak in the copper joint of the suspension hydraulic control valve.

Finally, for this article, a note on the steering. When in 4-wheel mode, the rear wheels were left to caster freely until they align with the hull, at which point they locked in place, and steering is with the front wheels only. When in 8-wheel mode, all four end wheels steered. Or moved, at least. Steering was another matter. But more on that next time. 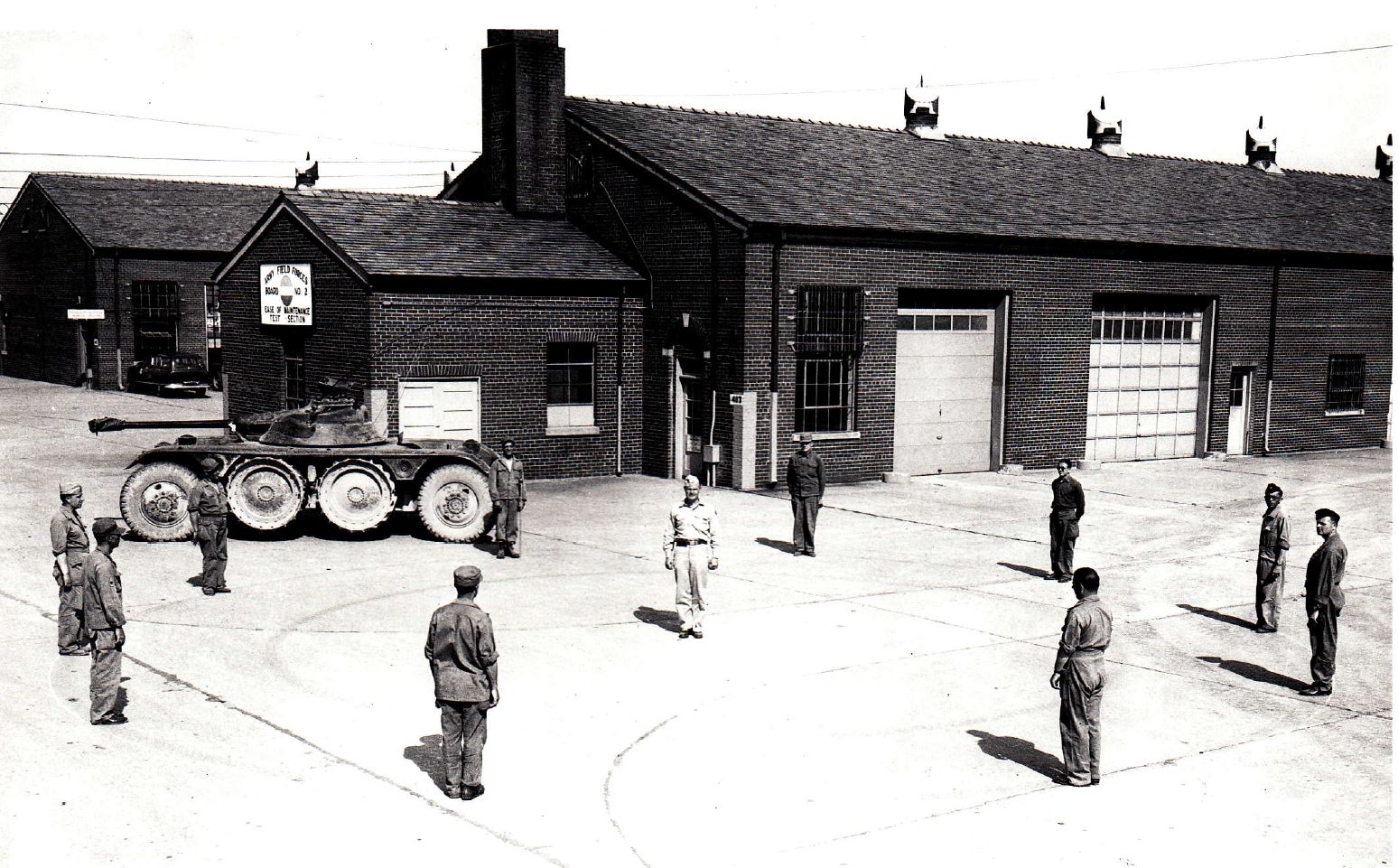 Also next time, we’ll cover what you’re really interested in… An assessment of combat effectiveness.  Clicking on a harmless orange seller, below, will take you to the forum thread.

It is I, LeBob