As I was rooting around in the scans I took from my various trips to the Archives, I’ve come across a few documents relating to America’s development of high-velocity ammunition, either solid-core or sabot. The U.S. played with both.

They are a little bit disjointed and thus this is more a collection of interesting observations than a unified article. So be it, it’s still some interesting information.

The U.S. started playing with sabot rounds in about 1942, mainly assigned by the Army to the University of New Mexico. The early experiments resulted in little practical, but were very useful in determining basic features varying from the substance that sabot petals should be made of through to the requirements of the firing gun. 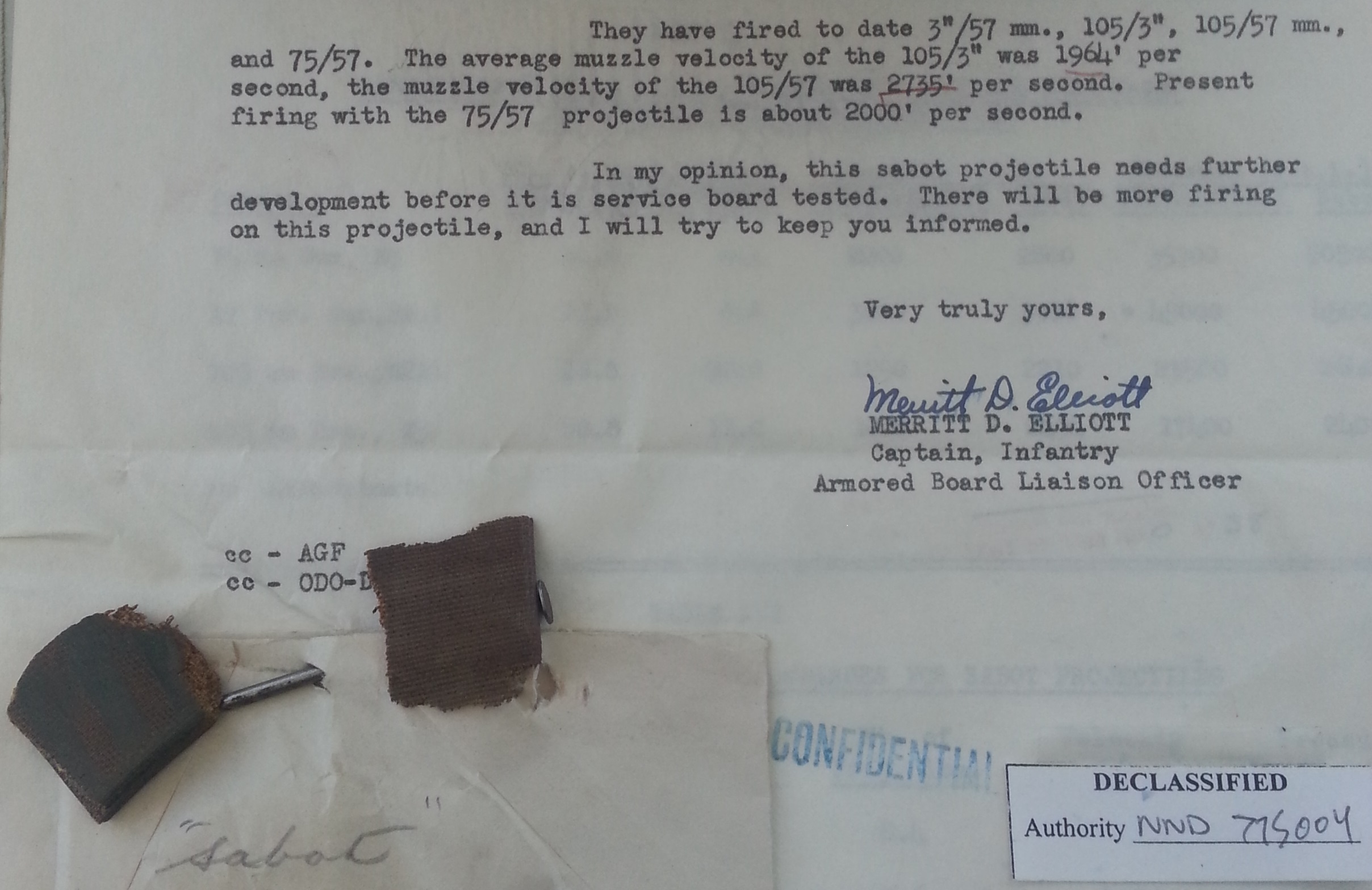 Samples of the sabot material found in the Archives.

For example, we know that the twist rate of the 3" and 76 mm guns (excepting the M1A2 gun towards the very end of the war) were insufficient to impart proper stability to the sabot round, which is why the U.S. issued HVAP instead. It was also noted that HVAP was more tolerant of being fired from a worn gun than sabot was. The only immediate advantage that sabot presented was the possibility of firing smaller rounds, such as the 57 mm AP, at higher velocities, which also meant that traditional steel could be used. The HVAP rounds relied upon tungsten carbide, a rare substance substantially imported from China, which had a number of uses domestically in addition to being fired at the enemy.

Although the 76 mm, 3" and 90 mm guns were being tapped for the future gun because of its armor piercing improvements over the 75 mm, it was a given that the 75 mm tanks would remain in service for the foreseeable future, hence the development of the 75 mm HVAP round T45.

With a muzzle velocity of about 2,850 feet/second the projectile was hurled out over a third faster than the basic M61 APC round, at about 2,050 f/s. The projectile itself weighed about 8.4 lb, of which 4 lbs was the tungsten carbide core, and the rest was aluminum. For comparison, the 75/57 mm sabot round fired a 7 lb projectile, all steel, also at about 2,800 f/s.

The report on accuracy was mixed. The sweet spot seemed to be about 1,000 yards, where a 5-round group of about 5 1/2" was obtained. Dispersion at 500 and 1,500 was considered “Excessive,” being about 1 m x 60 cm at 1,500 yards, and about 50 cm at 500. Though not pleased, the accuracy was considered "adequate" at likely ranges, namely less than 2,000 yards. (Of course, the post-war studies had not yet been conducted, which indicated a median range of about 500 yards and a very high probability of 300 yards). See my “Range Maths” article.

Of course, the point of the experiment was increased armor penetration. It proved quite satisfactory, demonstrated to being able to punch through some 6” of metal, albeit with some interesting after-impact course deviation. Shooting into an armor plate angled at 9 degrees, the projectile traveled into the metal at 34 degrees from vertical.

Still, there is no substitute for shooting at the real thing. This paragraph is noteworthy.

So far so good. We know that the 75 mm is a threat to Panther. Not guaranteed, but a threat. The faster 76 mm round is going to be a definite threat, right?

Of course, there’s more to be said on that, I’ll come back to in a moment. The development and capability of the T4 76 mm/3" projectile has been amply covered elsewhere, so a quick note on some of the larger items, such as the 90mm HVAP. A sabot round was also developed for the 90mm, but similarly not issued.

Then, in testing by October of 1944, after shooting at test metal, they decided that there was no substitute for shooting at the real thing. Two  major observations were noted. (I’m curious as to how many Panthers actually were shipped to the U.S. for testing as live targets, at this point)

The first was (as is now well known), American armor steel is a bit softer than German. The second, that the 90 mm HVAP didn’t punch through a Panther’s front slope.

There are two possible instructive conclusions here. The first is that the 75 mm HVAP design was quite simply better than the 90 mm one. Maybe an issue of length/diameter, maybe something else. Is it really likely, though, that the shell can be that much better? The other possibility is equally intriguing. That the armor plate on the two target Panthers was not consistent. There are competing schools of thought on the effect of the shortages of various resources were on German armor production. That there was a notable effect is uncontested, though in conversation with Hilary Doyle, he’s fairly adamant that instead of going with an overall equal degradation of armor quality, it was more put ‘all or nothing’, with the tanks receiving all the limited resources to maintain the quality, and the other armored vehicles such as Jagdpanzer (38)ts receiving outright poor quality armor plates. Either way, the test firing of the 75 mm HVAP round against that one Panther may have been an example of how the Americans ended up being overconfident as to their ability to deal with the new generation of German Armor. It’s not as if they would have had scores of the things lying around to test against for large sample sizes.

It is to be further noted that development of the T30 HVAP round did not stop in October after those tests, and even in that report they were hypothesising on how to change the manufacture of the round, such as by not machining the tungsten core or changing the set screw which holds it in place as well as by simpler solutions such as changing the core's shape. By April of 1945, they had gone to the T30E16 variant, which was performing quite well. Though it does beg the question of exactly which variant of T30 ended up being shipped over to be used against German vehicles. I’ve not come across that file yet. However, the standard T33 AP round was considered to be quite sufficient for most cases.

Speaking of T30, and moving to the 155 mm heavy tank, there was a bit of HVAP experimentation for that as well. The round was Shot T35E1, and the tungsten carbide core alone came in at over 15 lbs, nigh on the weight of the complete 90 mm round, and doubtless a good dip into the pool of a strategic asset of the metal. The projectile overall came in at 57 lbs, velocities of up to 3,000 f/s were obtained when fired from a 155 mm gun M1 (since the tank gun wasn’t available at the time in early 1946).

The results were interesting.

Note the massive drop-off in effect at about 2,400 fps. This was a known issue with HVAP rounds, that under a certain velocity (i.e. over a certain range) the round tended to shatter upon impact, that velocity generally being at around the 2,300-2,500 fps range.

Note also that the firing was cancelled by the officer in charge, an artillery lieutenant colonel. He did it because  he didn’t see the point in wasting the ammunition in a test which failed to validate the calculations from Ordnance Branch. On the other hand, it showed that if you really wanted to make someone miserable, at least at close range, the 6-inch gun would punch right through almost anything with the HVAP ammunition.

Anyway, that's all I have for you right now on  this one. I don't recall seeing this information anywhere else, and I felt it was better put out arbitrarily than not at all.

Quickly, to the Forum!