This is the third in a series of articles about anti-tank operations in the Anzio landings. Part 1 covered the initial phase up until the German counter-attack. Part 2 focused specifically on  the 645th Tank Destroyer Battalion, which took the brunt of one of the German lines of attack. We now zoom out in scale a bit to look at what else was going on around the beachhead.

The 601st fired a both direct and indirect rounds over the course of the German push. The 36 guns of the battalion fired 239 rounds HE, 15 APC on the 16th, 90 HE and one APC on the 17th, and 100 on the 18th. Of those, 300 HE were indirect, the rest were against armor and infantry. The unit reported that the  Germans were constrained by the weather and terrain to the roads. Although both Pz IV and VI were used, and reported in groups of  20 or 30, the TD crews never saw more  than 9 at once, normally only in twos and threes. They believed that the terrain and weather restricted  this, and the TDs sited themselves to cover those roads. It worked both way, though. The 645th reported

This has been miserable  terrain for our destroyers. We have been road bound and forced to use the comparative hard ground in proximity of houses and buildings which are well recorded on enemy firing charts […] Sometimes it is necessary in order to  obtain a field of fire to deliberately drive the destroyer into position, knowing that it will be  impossible to get it out until the advance allows unhampered retrieving […] TDs should never be positioned near a house because of the excellent target  it makes. Yet 75%  of the positions occupied by tanks and TDs have been near houses because they have been  built on the only solid ground which exists 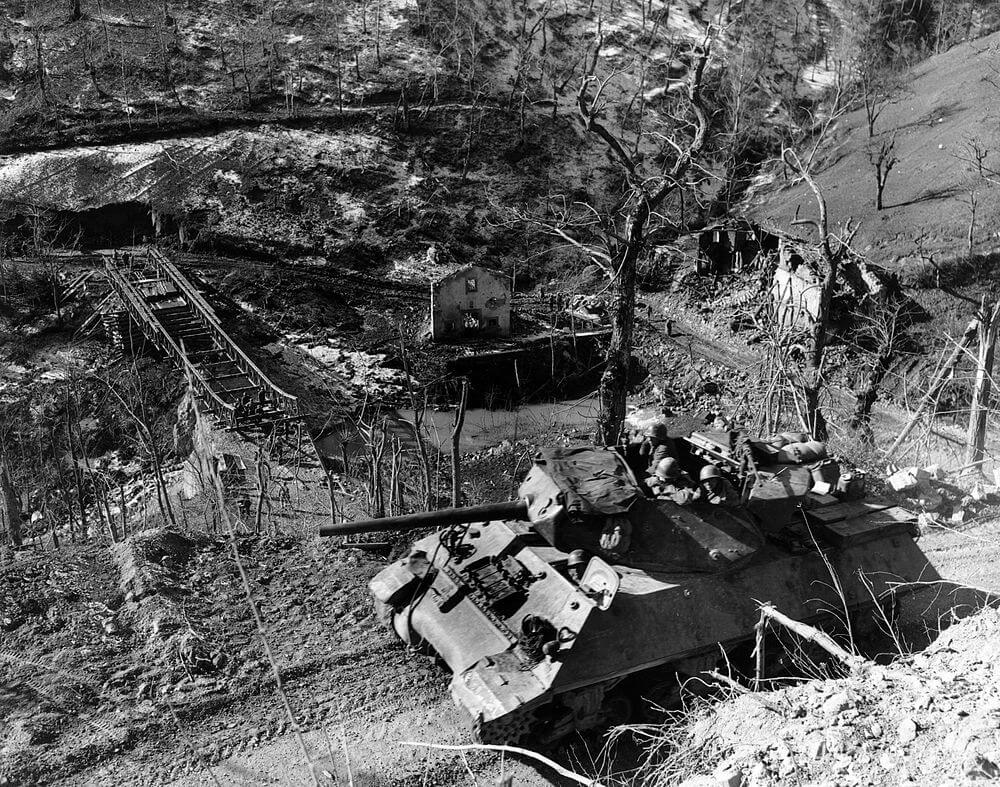 Despite being under frequent air attack, and ‘effective’ harassing artillery fire, the 601st reported its morale for this period as being “unusually high […] due to the fact  we were destroying enemy tanks,  the purpose for which we were designed.” By the end of the month, 601st  claimed 14 tanks killed, 3 probable, an armored car, a PaK gun, a howitzer, a pillbox, and someone in B Company was credited with an FW-190. They lost one M10 not repairable onsite.

The 601st reported different levels of efficiency in organization. Contrary to doctrine, the battalion was split up by company, and placed under the command of an infantry regiment each. One company saw a relatively harmonious relationship where the Regimental commander just told his TD captain what he needed one. Another company found itself micromanaged by non-subject-matter expert commanders who placed the guns where they felt they should go, not where the destroyermen felt they should go.

The frustration seems to have boiled over in the March AAR.

One of the most important points, stressed by Allied Force  Headquarters, Fifth Army, and all Tank Destroyer  experts, is that infantry commanders continue, against the tactical advice of these persons, to place Tank Destroyers in forward anti-tank positions where they can have only one logical field of fire instead of placing them in a central position where they can move rapidly to cover a logical area. This tends to

Another problem the 601st dealt with was working with the infantry’s anti-tank guns. Local commanders tended to leave the 57mm  guns in the rear, and use the TDs up front as anti-tank guns. The 601st made some headway, and at least some units started to accept their suggestion that the anti-tank guns be dug in up front to protect the infantry, and the TDs be placed a bit further to the rear for better overall coverage. (For those who miss the distinction, the US Army differentiated between anti-tank units and tank destroyer units, the former intended to be in the front line). Why this needed to be done when doctrine was officially clear on the matter is one of those long-standing questions. 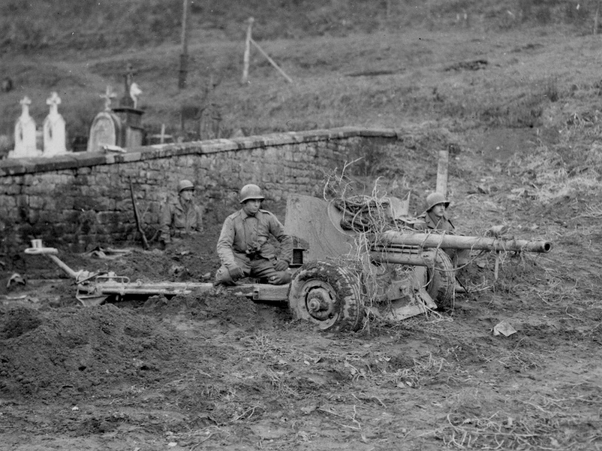 In terms of gun-level tactics, the 601st reported that it generally set up firing positions next to houses. The gun would ordinarily stay in position behind the house, then, when needed, would move out to the prepared position, engage, and then fall back behind the house again. I guess the Germans were less prolific with the HE use than the 645th were (which, you will recall, simply used HE rounds to remove houses between them and enemy tanks).

With the petering out of the German attack, 1st Armored Division started an attack of its own, with a company of the 701st attached for overwatch. 701st killed 2 tanks, the Shermans dealt with the rest which were encountered. However, there was more to follow with the next major German push on the 28th. Between 75-100 tanks were estimated to have hit 3rd Division over the next five days, but, again, they were stymied by the terrain and weather. The 701st’s report is a bit blurry, but indicates that each M10 carried 26 AP and 34 HE rounds. Over the course of March, 701st fired 10,902 rounds HE, 70 rounds AP, 298 rounds smoke. The 805th, 11,838. Of 11,984 rounds fired in February by the 636th, 2 were APC. This, again, should emphasise the amount of work that the TDs were doing shooting at things other than tanks. 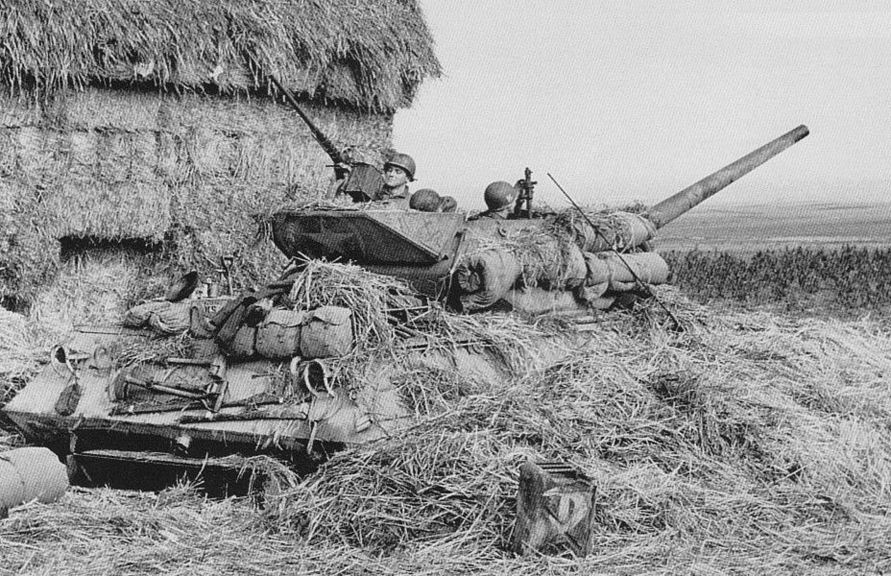 Not that firing at tanks didn’t result in prolific expenditure either. Interestingly, as the 701st found many of its guns attached to the 601st, one has to look  at the documentation for the latter to see various reports. By way of example, on 01 March, 1/B/701st claimed a Pz VI and three Pz IVs for 85 rounds expended. The same day, 2nd platoon claimed two tanks (one a Pz IV) with 100 rounds. One may well make derogatory comments about accuracy and wastage, but one still suspects it was easier for the US to make and ship 100 rounds of 3” than it was for the Germans to make and ship two Panzers. 3/A/601st claimed a Mk VI at 3,000 yards at the cost of 46 rounds APC on 9 March. (And then an airplane a couple hours later, the pilot landing by the command post of a nearby infantry battalion). The general conduct of events for the 701st when defending was that the TDs would knock out one or two tanks of an attack, call in artillery fire to strip away the accompanying infantry, and remaining tanks would withdraw. This increased radio usage led to an emphasis on the use of an auxiliary motor ("Tiny Tim") to keep the radios running without using the TD’s diesels, which is remarked upon frequently in the reports. Also not just for artillery; mention is made of frequent communication with aerial observers for which the radio would need charging.

Perhaps the most intriguing claim, if not the longest ranged tank kill claim I’ve seen reference to in WW2, goes to C/805th, claiming two tanks at 12,500 yards, first round hits with HE, starting fires on 27 March. The 805th was a towed unit at the time, the guns were firing semi-indirect.

The  official service life of the 3” cannon barrel was somewhere around 2,200 rounds (the scan is a bit smudgy). However, the various reports indicate cannons were still often  serviceable after 3,000 rounds, and there seems to have been adequate supply of spares that withdrawing for repair and maintenance when the barrels did finally start to wear out doesn’t seem to have been remarked upon other than to say ‘it happened’.

Italy was the first major testing ground of the towed tank destroyers, after a number of units were converted following experiences in North Africa.

Opinions from the commanders after the fight came back as follows.

Even when dug-in, they have only the 800mil field of fire. Hence it takes 4 guns to cover 360 degrees of territory, whereas a single self-propelled TD would cover the same 360 degrees of fire.

There is no protection to the gun crew which the armor of th M10 affords. Consequently, when tanks show up and artillery fire is laid on the towed gun, the crew cannot man the gun, whereas in an M10 the crew can and does man the gun.

The towed gun cannot fire and move, as the prime movers are very vulnerable when attempting to get out the towed gun. For example, a British towed regiment and the 894th Self-propelled battalion were in two adjoining division sectors where a heavy German attack was made. Both divisions were forced to make withdrawals. The British regiment,  in the course of 2 or 3 days, lost over 60 towed guns, most of which never had an opportunity to fire a shot before they were overrun. On the other hand, the 894th lost only a few of their self-propelled mounts. On another occasion the 645th had the misfortune  of having their infantry pull out without warning, and had they not been self-propelled, they would have probably been completely liquidated.

Of course, all this really only takes us to the end of the initial back and forth. Anzio would be a bottleneck for several more months, which is a little beyond the scope of this batch of records.