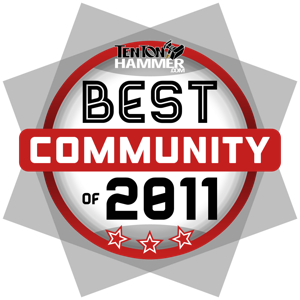 We just received word from MMO news source Ten Ton Hammer that they have selected you -- the World of Tanks community -- as the best MMO community of 2011. The award is part of the outlet's annual end-of-year awards celebration, and this year it belongs to you!

Take a look at what Ten Ton Hammer had to say about World of Tanks and the community:

In November, World of Tanks broke its own Guinness World Record peak concurrency, reaching over 250,000 users on a single server. Though Clan Wars (an elder game system where player clans vie for power and premium currency on a global map) is still in beta in the US, the randomized instant battles have spawned their own unique (and often hilarious) chat culture, and a stepwise progression from platoon battles to tiered company battles to clan battles allows players to band together at their own pace.

Great game communities don't evolve in a vacuum, and though Wargaming.net's frequent Q&As are delivered with Belorussian brusqueness, no studio does a better job of keeping its player community in the loop. What other developer tells its playerbase its roadmap for updates through the end of 2012, or discloses its plans for not one, but two franchise follow-ups (World of Warplanes and World of Battleships)? What's more, Wargaming.net has taken significant steps towards the mainstream with its flourishing community. The company that had spent GDC 2011 in a tiny, tucked-away cubicle owned a third of the West Hall floor at E3 2011, and recently purchased a number of holiday TV spots.

World of Tanks is our pick among MMOs and Online Games for Best Community of 2011, and a big GL HF to Wargaming.net and the World of Tanks community in 2012.

To check out all of the 2011 awards, head over to Ten Ton Hammer!