Thanks for laughing along with us this April 1st! 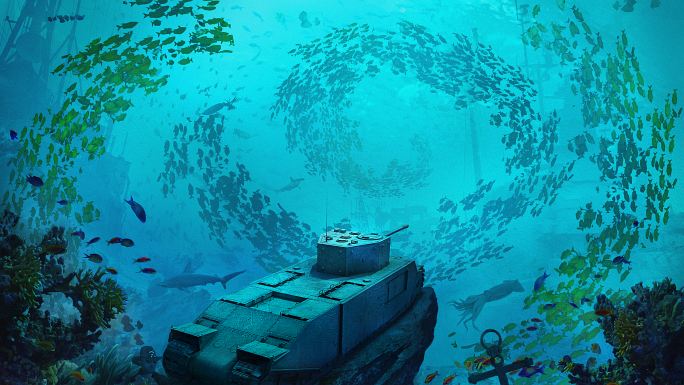 The sea is filled with mystery; a limitless potential to explore, and is one part of the planet that humanity hasn't truly conquered. In terms of conflict, it's true that naval battles are intense and, in Wargaming's case, make a great subject for a video game -- as we're already proving with World of Warships. But we as a company know that there's more bubbling under the surface; we know what got us here was World of Tanks. 100 million players certainly don't let us forget.

New projects at Wargaming can take several years to plan and overcome engineering hurdles. For several months last year, in secret, our development teams hunkered down to determine a way to give players the best of both worlds. One tank was already halfway there, but it wasn't enough. We had the facts -- tanks: big and powerful, and ready to take on all kinds of terrain. Underwater: floaty, beautiful, and full of cool-looking sharks. Suddenly, a moment every creator dreams of: when the answer is right in front of you.

Water We up to?

Waterworld of Tanks gives you an authentic, fully-submerged WWII armored combat experience. A selection of underwater maps based on charted areas of the Pacific and Atlantic oceans, just as they looked at the time, will challenge teams to coordinate and execute their own art of war under the sea. Simply select the appropriate vehicle in your Garage and enter a Random battle to get started. Don't forget your snorkel!

Speaking of vehicles, Waterworld of Tanks will give you access to a tech tree featuring tier B ("Blub") tanks. Despite some propellers or fins on some models, you will find familiar vehicles with unchanged mechanics -- except, of course, for about an 80% reduction in speed and gravity. Likewise, shell range is reduced to 10 meters (15M for artillery). It's a challenge the likes of which no tanker has ever seen! And if you think tanks have no place being underwater... well, history is on our side.

If you're getting excited, don't worry, so are we! No expense is being spared to ensure Waterworld of Tanks is finished and added to World of Tanks as soon as possible. We can't confirm when that will be, but wanted to reveal this sneak peek when we were confident in this new direction.

*No, we know tanks can't float. That's just the tagline.

Clam Wars will be compatible with Waterworld of Tanks, too! Get all the details from our Clam Wars crew in an exclusive Reddit AMA!