You guessed it: we're headed to PAX and in true Wargaming fashion we've got an incredible booth to share all of our current, and soon to be released, games with you! Come by booths 132 and 232 (adjacent to each other) for your chance to score official World of Tanks and World of Warplanes merchandise!

Every day of the event you can come by the Wargaming booth and play on one our 30 game stations. When you play one of our games at the booth, you'll be handed a raffle ticket. Take that raffle ticket to the merchandise table to collect your official Wargaming merch. That same raffle ticket automatically enters you to win a "spin" on our custom-made prize wheel! The raffle will be held three times a day (12:00 PDT, 14:00 PDT, and 16:00 PDT). Multiple winners will be drawn for each title -- more chances for you to win big!

If you're not able to stick around to play a game or two or make it to the big raffle, don't sweat it. We'll be doing plenty of ad hoc mini-contests and prize giveaways at the booth all day long. Just come by and hang out! 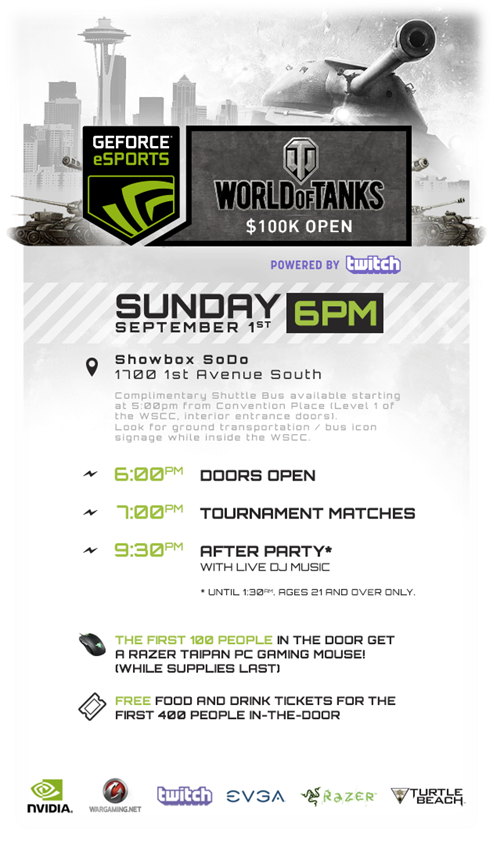 As you've probably heard, there's a tournament taking place at this year's PAX. It's kind of a big deal. Okay, so it's 100,000 small deals, but they sure do add up fast! Not only will there be some truly epic gaming and prizes for our top players, but there's an open-to-the-public after-party! Seriously, everyone age 21+ is welcome to come -- just show up to meet staff members from the North American Wargaming offices and some of the best World of Tanks players in the world!

The first 100 people in the door will receive Razer gaming mice, and the first 400 will receive free food and drink tickets for the party!

Who: WGNA Employees, some of the best WoT Players from around the globe, and you!

Please keep in mind that all prizing and merchandise are only available as long as supplies last. Come join us for some fun and don't delay in securing some sweet sweet PAX loot for yourself!