The next content update to World of Tanks® is here! With this new update we're introducing the Chinese Tech Tree that comes along with 17 new tanks to take on the battlefield! You can find download links to both the standalone update as well as the 8.3 patch to get you out on the field as fast as possible. Whether you'll be rocking the WZ-111 or the Type 59, we hope you enjoy this new content in World of Tanks®. Roll out! 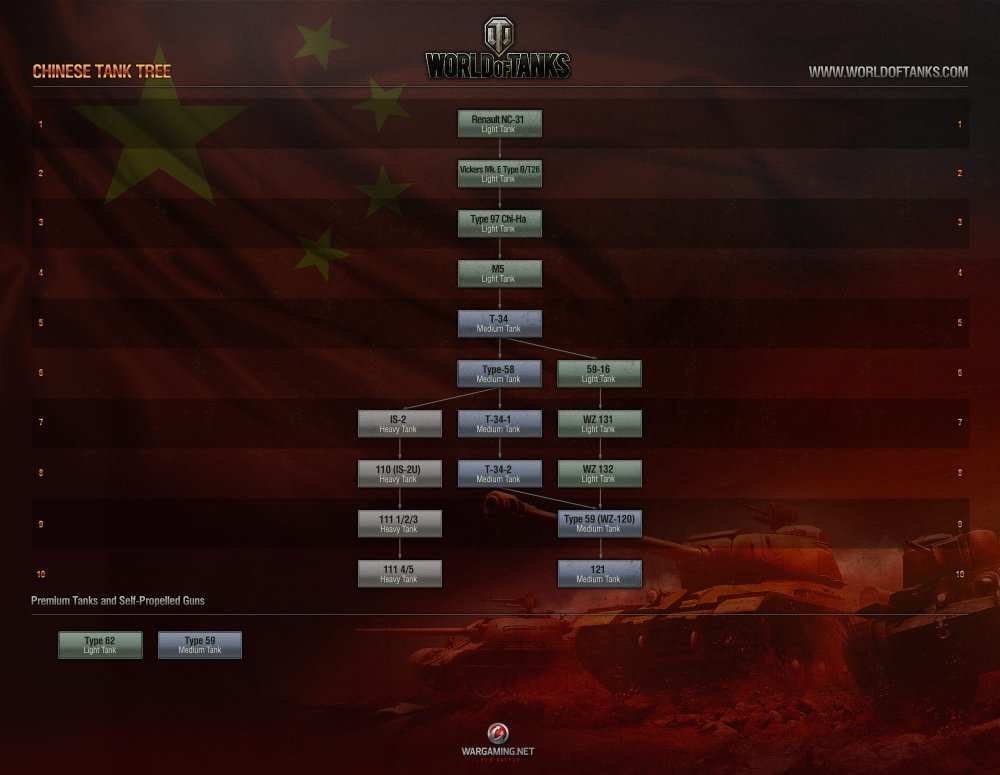 
The Chinese tanks are an interesting breed. It's well-known that many of these tanks were imported from various nations like the United States, Great Britain, and the Soviet Union to name a few. Thanks to these groups doing all of the heavy lifting, that left Chinese engineers in the unique position of being able to customize, tweak, and improve upon existing designs as they saw fit.

Not all of these tanks entered service. In fact, outside of the Type 59 (WZ-120), the Type 58, and the Type 97 (Chi-Ha), none of these ever saw official service as part of the Chinese army. However, once the 8.3 patch launches on Thursday, you'll have a chance to play these and all of the tanks listed above in the Chinese Tech Tree image. Then you'll be able to try out first-hand what it might have been like if many of these concepts and designs went into production and managed to meet other nations on the battlefield.

Main Features of the Chinese Tanks

Since the Chinese tanks, for the most part, are a hodgepodge of different parts, their role on the battlefield will be a special one. The biggest impact, as you can see from the tech tree above, is that Chinese light tanks go all the way up to tier VIII which will increase the options of speedier tanks on the battlefield in higher tier matches.

That's not to suggest that the other tank classes will be left out. In fact, mediums will be capable of inflicting serious damage thanks to their guns, and heavy tanks (in some cases) will actually have heavier armor than their Soviet counterparts.

What Else is Happening in 8.3?

In case you missed some of our posts over the last few weeks, the 8.3 update has been on the Public Test server going through necessary tweaks and overall stability tests. You can see an entire list of changes in the 8.3 Update Notes that covers various stat changes that are coming to all nations.