We’ve been through multiple forum threads, surveying your preferences, and discovered that the Personal Rating introduced back in 8.8. looks outdated and kind of insufficient in comparison to third-party offerings.

Currently, the Personal Rating calculates the total progress of an account rather than evaluating player performance, which makes for rigid stats that say little of your opponents or personal efficiency. The more battles you’ve been through, the higher your rating. Putting modes that are miles apart in gameplay into one basket led to questionable apples-and-oranges leaderboards. There is hardly any criteria to determine if a player is skillful or just plays in different modes. On top of that, the rating is calculated as an undividable value and neglected a vehicle's nuances.

While building on the current tool, we focused on these issues and devised a completely new approach to evaluating player worth. Along with fixing existing problems, we tried to make it flexible and agile.

The improved World of Tanks Rating analyzes player performance in Random Battles. It assesses combat efficiency on each tank according to a set of vehicle-specific criteria to provide an evaluation of a player’s overall performance. The system fluidly responds to changes happening to the game and compares stats against average indicators across the server to ensure there’s a substantial data sample to define the best and worst out there, with maximum accuracy. We didn’t stop halfway and revisited the Hall of Fame, improving it based on the new rating and enhancing its UI to streamline the experience.

The new rating system is available now and you can check it out in the Hall of Fame. We invite you all to try it, share your impressions, and help us fine-tune the two leading to launch! But before you do, here’s a full rundown on the new rating calculation principles and the revamped Hall of Fame.

The old Personal Rating will be available during testing, too. Once we fine-tune the new tool, the current Rating will go away, replaced by the new system.

Random Battles only: Calculations are limited to the most popular mode, Random Battles, to deliver a relevant evaluation that doesn’t mix up stats from scenarios that differ in terms of gameplay.

Receptive to in-game changes: The rating responds flexibly to rebalances and changes in combat strategy as it evaluates your stats against average indicators across the server.

EXAMPLES:
If the average damage indicator drops for a vehicle across the entire server—it won’t affect your rating in any way. Similarly, if damage blocked by armor becomes a more important parameter after an update, its influence on the rating of that vehicle increases. This way, the player assessment you receive is always on-point with the state of the game.

Vehicle-specific ratings: The rating is calculated for each tank separately, and these vehicle-specific scores are then used to assess a player’s overall performance. After you select a tank, the system ranks performance indicators according to their relevance for this particular vehicle.

Each of these parameters has a different influence upon the rating depending on the particular vehicle.

The “Damage blocked by armor” parameter says little about the Bat.-Chat 25 T and other poorly armored vehicles, but speaks volumes about the heavily protected Maus or IS-7. Hence, this will rank high for the Maus but be less important to the Bat.-Chat’s combat efficiency. The Bat-Chat is focused on damage dealing, so this parameter ranks high. And the more damage it causes to enemies, the higher its combat efficiency.

Similarly, the number of destroyed opponents is definitive for vehicles with a high rate of fire and low damage per shot (e.g., the T-62A), and far less important than damage caused for the JagdPZ E-100, and others with devastating alpha.

The same logic applies to the other parameters: their importance changes from vehicle to vehicle, while the level of their influence for each vehicle depends on the average values on the server.

The vehicle rating depends on two parameters: a player’s flexibility and their stats on the chosen vehicle.

The system evaluates player flexibility by assessing uniformly high average values of parameters that matter most for the chosen vehicle. The parameter’s influence (i.e., importance coefficient) on the final rating value is ~25%.

You receive a certain amount of points by staying in a particular group. The higher your statistics, the higher the group, and the more points they receive. Also, staying in the top groups by the vehicle’s most important parameter provides more points.

What does it mean in terms of day-to-day player behavior? Simply put, your flexibility is rewarded now. Get the most out of a vehicle and this translates to your World of Tanks Rating.

Player statistics are assessed against the average server parameters for that vehicle. The only exception here is the number of survived battles. The influence of a player’s statistics on the final rating value is ~75% (i.e., the importance coefficient is 0.75)

The comparison between the player and server values is multiplied by importance coefficients for flexibility and statistics (~0.25 and ~0.75, respectively); then they get totaled. This way, the better the player’s performance in a vehicle compared to the performance of all other players in the same vehicle, the higher the value of the second parameter for this player.

We faced three major challenges when designing a model for account ratings:

After several iterations, we arrived on a formula that takes into account all these variables:

As you see, the account rating is defined by vehicles with the highest rating and a sufficient battle count.

Level Coefficient is the coefficient for multiplying the rating of vehicles of that tier. Multiplying here ensures a fair evaluation for players at different progression stages or those preferring different vehicle tiers.

Tier coefficients also minimize the effect that researching new vehicles or playing in Premium vehicles have on rating drops.

The performance coefficient is designed to single out players who show a great performance in several vehicles by increasing their rating value.

When determining the coefficient, the system considers overall player performance rather than the number of battles fought.

This way, top positions in the total rating will be taken by players who demonstrate a great performance in a large number of high-tier vehicles.

IMPORTANT NOTE: Considering the calculation specifics and game development logic, the account rating is calculated from December 2014 (starting with 9.5).

The Hall of Fame received its share of adjustments, too, and is now available both on the website and in the client. It's built around the new rating and offers two types of leaderboards: “Common Rating” if you’d like to compare your performance with friends and Clanmates, and “Vehicle Rating” if you came to check the efficiency of one of your tanks.

We significantly reworked the UI to streamline your interaction with the system: 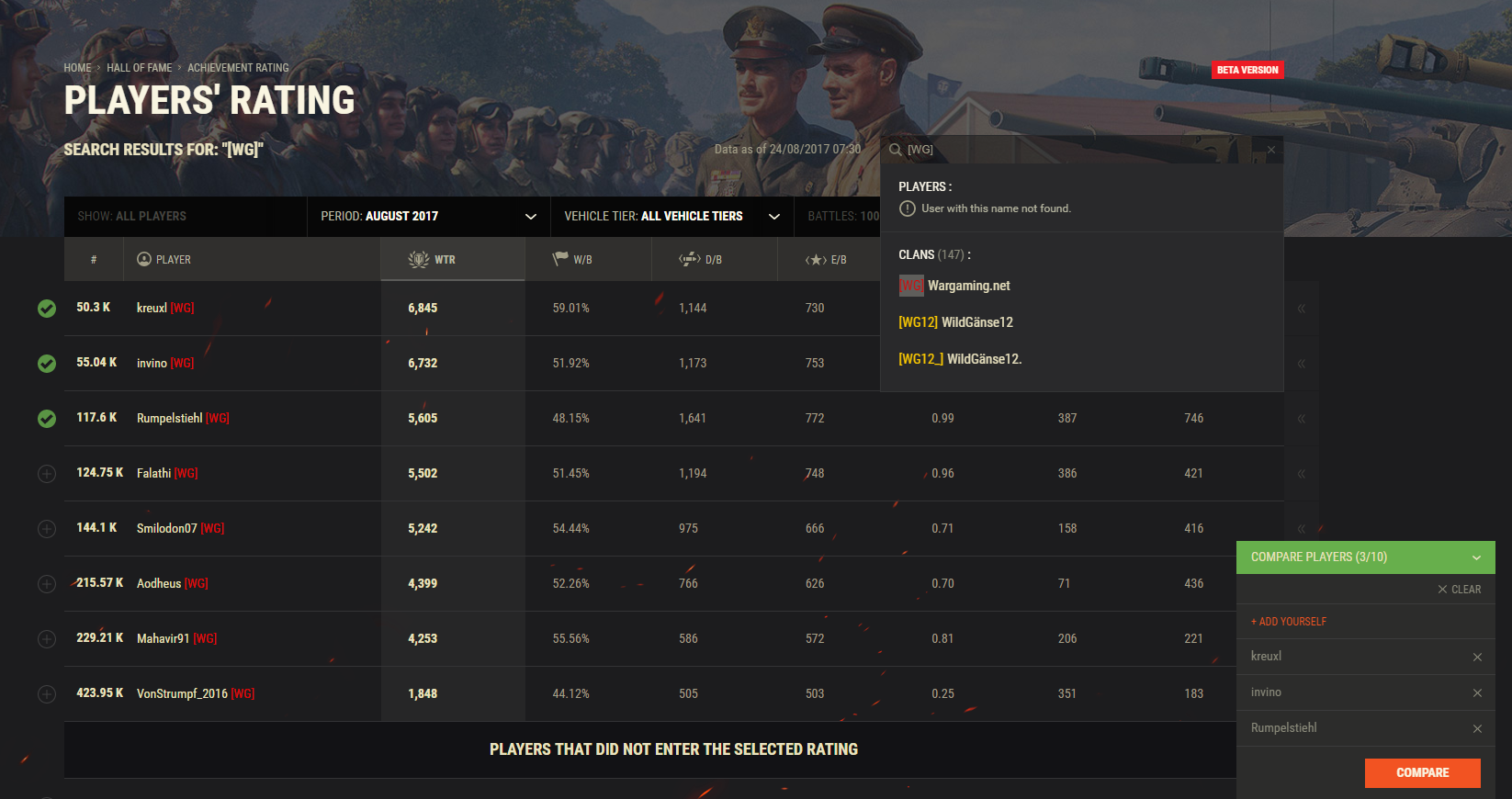 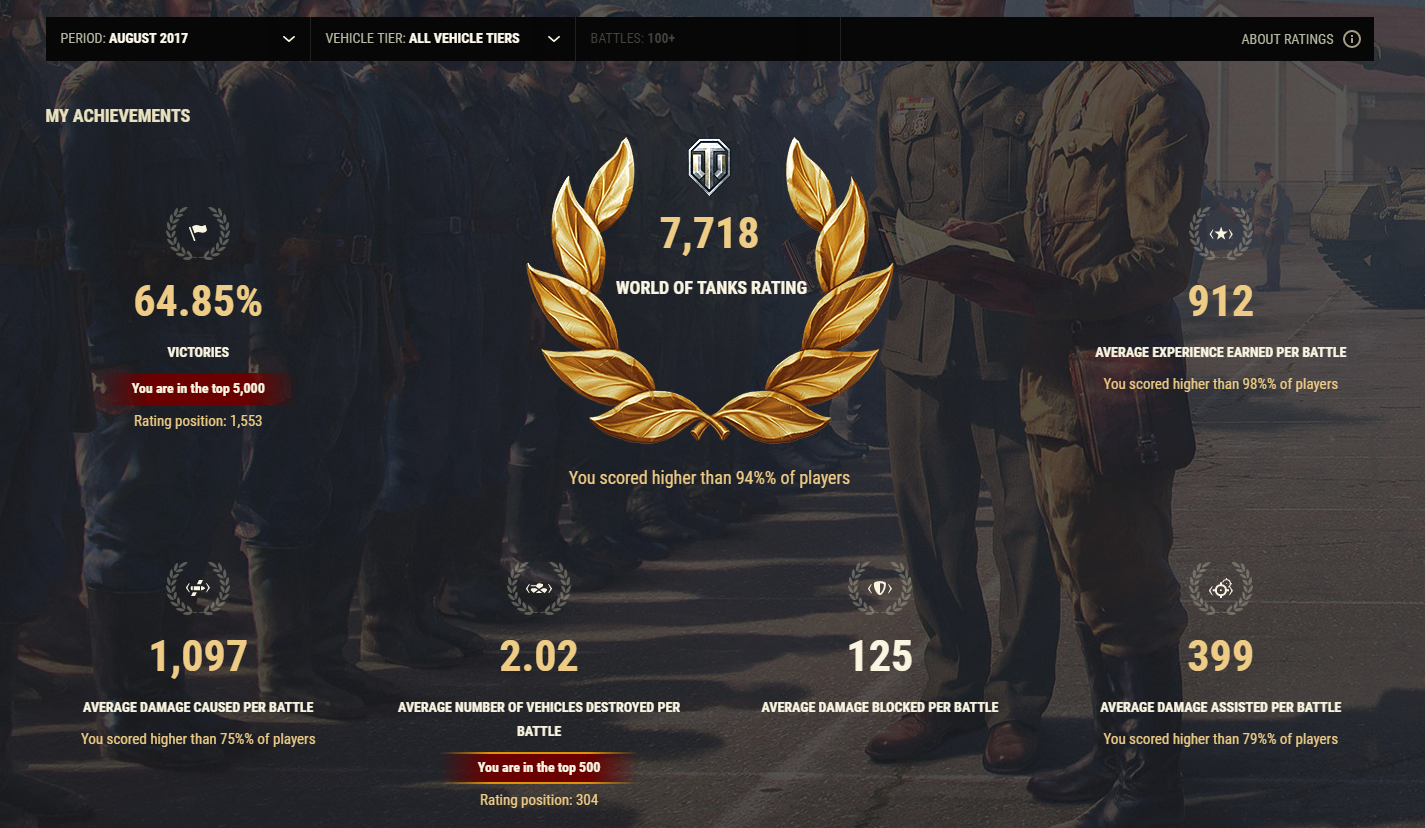 The new rating is integrated in the XVM mod and its services. If you like it, you can trust it to deliver the latest data using these enhanced algorithms.